By Camilla M. Mann October 27, 2015
When my blogging friend Aly of Cooking in Stilettos and Aloha Flavor suggested a blogging event called the Harvest #BloggerLuau, I was in. Immediately. I love all the flavors of the islands.

The event didn't come together for a variety of reasons, but I decided to share the recipe I had prepared anyway. It's too good not to share it. Well, if you don't mind tentacles! 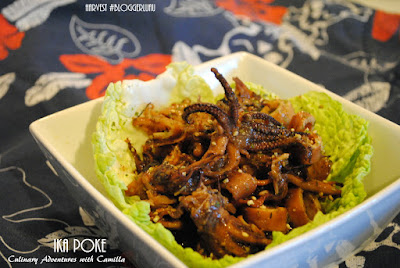 I had always thought that pokē was a raw salad served as an appetizer in Hawaiian cuisine. Turns out that pokē is the Hawaiian word that means "to section" or "to slice or cut". So, it's about how it's cut.

I found lots of recipes for tako (octopus) pokē. but none with squid. I decided to give it a try. Ika means squid. Click for how to clean squid. 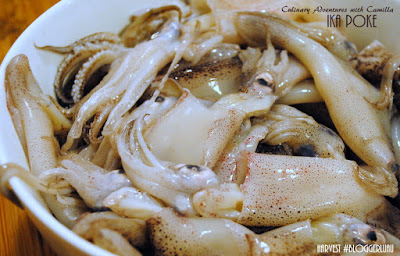 Procedure
In a large pot - I used a Dutch oven - heat 1 T olive oil and saute onion and fresh ginger. Cook until the onion turns translucent. Place the squid in the pot and pour in the sake. Bring the liquid to a boil, then cover the pot and turn the heat down to a simmer. 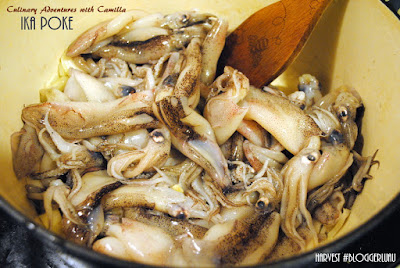 Let braise for 60 minutes. Stir in the sesame oil, sesame seeds, and soy sauce. Bring liquid back to a boil, then cover the pot and turn the heat down to a simmer for another 30 minutes. 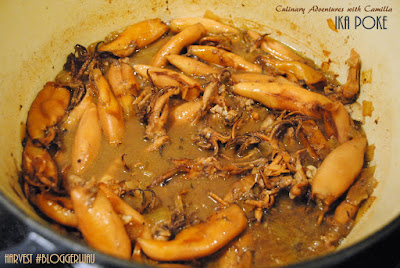 Thinly slice the braised squid tubes on the bias. Leave the tentacles intact. In a small mixing bowl combine squid and 1 C of the cooking liquid with hot sauce and salt, to taste. Chill for, at least, two hours in the fridge. Serve in a cabbage leaf.