Under a Full Moon on Lìpari + Passata di Pomodoro 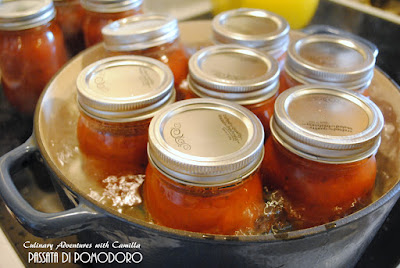 Years ago, at the tail-end of my time in Italy, I traveled to Lìpari, an island off the coast of Sicily, and rented a cottage on a farm. Everyday the family left me different things in a basket by my door - fresh tomatoes one day, garlic another, and freshly laid eggs on the next. It was glorious to make dinner each night with something from their farm.

On the second to the last evening I was there, I was sitting outside with a glass of wine, crusty bread, fresh cheese and beautiful, sun-kissed tomatoes from the farm. Signorina! came a voice from the main house. I put down my glass and walked toward the house. The farmer's wife asked me if I would like to watch them make tomato sauce that evening. Vieni fuori alle due, d'accordo? Come outside at 2 in the morning, okay? Okay.

At two in the morning, I pulled on some jeans and a sweater and walked out in the chilly morning air. It was a full moon though I don't know if that was significant in this family ritual, or if the timing just worked out that way. I made my way towards a pyre in the middle of the field. Vieni, vieni! beckoned one of the sons.

Like a well-oiled machine, all of the activity was a blur. Two people tossed whole tomatoes into the pot. Two more people shoved the tomatoes around with a large wooden paddle. As the tomatoes lost their shape, someone with a bucket attached to a stick pulled buckets' worth of tomato sauce and dumped them into a mill. The farmer cranked on the mill and the sauce, now evenly ground, poured out into more buckets. Three people were carefully pouring the passata di pomodoro into the beer bottles and capping them. They continued for hours. I watched for hours. As the sun was beginning to crest over the hill, the mound of tomatoes was gone, the pot was empty, and an entire army of bottles stood, filled, in crates. I was astounded.

The family I had worked for for ten months had crates just like those and it's how I made pasta dishes for them throughout the year. I wondered who made their passata di pomodoro because I'm fairly certain no one in that house had done what I had just witnessed.

So, whenever I have a glut of tomatoes, I make passata and long for Lìpari. That morning, under the full moon, was one of those food memories that is forever etched into your brain. 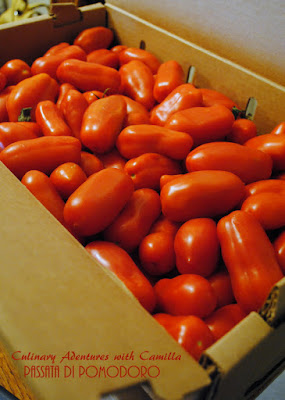 Passata di Pomodoro is a starter sauce. Cooks in Italy use it as the base for any tomato sauces. So, for instance, you might saute garlic in a pan, add the passata, pour in some wine and let that simmer until thickened, and fold in fresh herbs before tossing into pasta.

You can make passata with just the tomatoes and lemon juice and season with herbs later. A note about the lemon juice - they didn't use any lemon juice when I was on Lìpari, at least not that I saw, but best practices for canning food dictates you need some acid for safety. So, I use it. I also use sterilized jars and lids, chuckling at the memory of those old beer bottles that might have been rinsed out before using. Maybe. Maybe not.


Procedure
Slice tomatoes in half lengthwise and place them in a large pot. 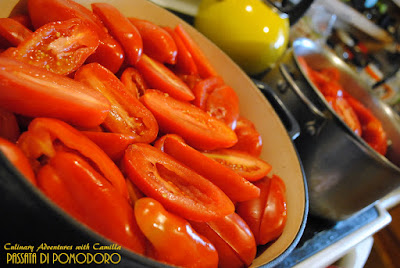 Bring to a simmer and let cook for at least 30 minutes. The tomatoes should be softened and have released much of their liquids. 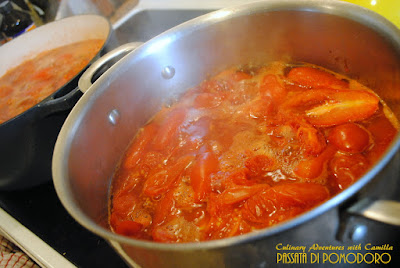 Carefully ladle tomatoes in a blender and blend until smooth. 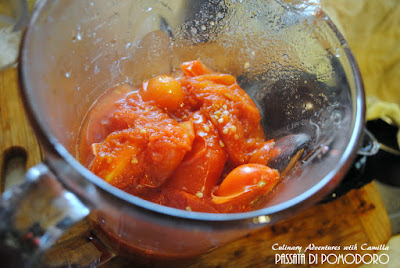 Pour the blended tomatoes back into the pot. Stir in the dried herbs. And let simmer for another 60 to 90 minutes. It will reduced by about 25%. If you want it more concentrated and thicker, cook for longer. 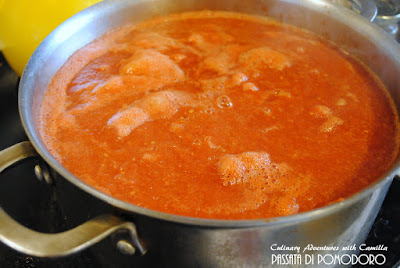 In the meantime, sterlized your lids, bands, and jars. Place 1 T of lemon juice into each jar. Then, carefully ladle the sauce into the jars. Wipe the rims and finger tighten the lids. Place the jars into a water bath and process for 35 minutes. Let the jars cool on a kitchen towel until they are sealed and fully cooled. If any jars do not seal properly, place them in the fridge and use within 2 week. 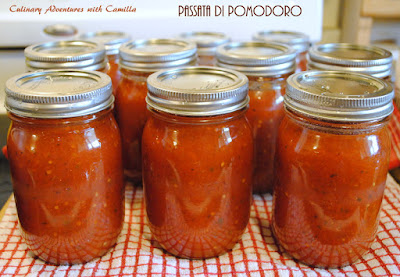 I'm still trying to figure out what to do with my second 15-pounds of San Marzanos. A friend suggested: more of the same...and send some jars to Michigan!