By Camilla M. Mann October 09, 2015
Years ago, I made this for my husband's birthday dinner. It has since become my most requested dish from my circle of friends. Granted, I never make the same thing twice...at least not exactly the same. But I decided that I would re-publish this and put in in the Purple Book as this is the dish that has received the loudest ooos and ahhhhhs. Maybe ever. Brian said it succinctly: "two of my favorite things - seafood and pie!"

A note about the seafood: Use whatever seafood you have - make sustainable choices, please! For this b'stilla I used Pink Shrimp (wild-caught, from Oregon), Bay Scallops (farmed), Mussels (farmed), Pacific Cod (longline-caught, from Alaska), Squid, and Shrimp. 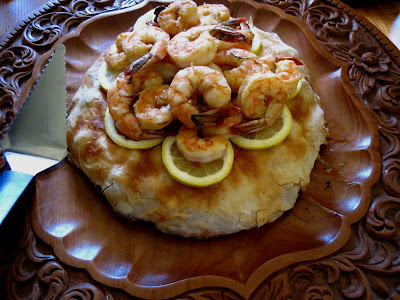 Procedure
In a large, flat-bottom pan, melt 2 T butter with a splash of olive oil. Saute the onion and fennel until the onions are transparent and the fennel softened. Add in the seafood - minus the shrimp for garnishing - and season with lemon juice, zest, paprika, cumin, salt, and pepper.When seafood is almost cooked, fold in the fresh herbs.