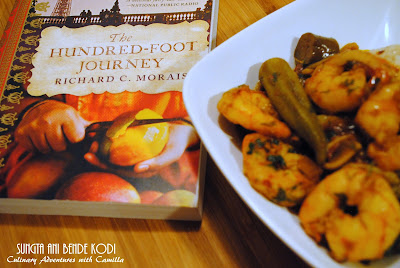 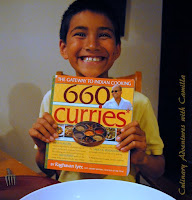 Earlier this month my boys were on a cruise with my parents. While Jake and I did enjoy several fun date nights, I missed cooking with my Kitchen Elves.

This one [left], the Enthusiastic Kitchen Elf, loves all things curry. So, as a welcome home present, I gave him a new cookbook. He was thrilled and, his first night back home, he made a lamb curry. 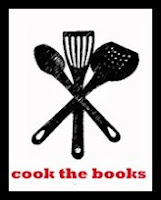 Thinking about our Cook the Books assignment from Deb at Kahakai Kitchen (click for her invitation), I wanted to play more with spices and make more curries. We did have, after all, 659 more curries to try! But first a little bit more about the assigned book.

I had read The Hundred Foot Journey by Richard C. Morais years ago, but just got it back from a friend to whom I had lent it. Perfect timing. I tucked it into my backpack and brought it to the hotel when my husband and I sneaked away for a staycation on the beach while the boys were out of town. I devoured it in just a few sittings - first with wine in the evening, then with coffee the following morning.

The novel follows the footsteps of its narrator, Hassan Haji - from the slums of Mumbai to the zenith of Parisian haute cuisine. Don't be fooled by the title; his journey is many, many miles further than one hundred feet. But those hundred feet - between his family's Indian restaurant and a French restaurant across the street - launch his journey to a three-star Michelin chef.


When I first read the book, I made notes that it certainly felt more fairy tale-like and farcical than I thought it would be...and rife with cliches. But, reading it again, with a focus on the food instead of the story, it was quite enjoyable. His prose is rich and luscious. Just ignore the potholes in the plot.

On the Plate...
So, there was no doubt in our minds we were going to make a curry. During one verbal altercation between Papa, Hassan's father, and Madame Mallory, the restaurateur across the street, she declares disdain for Indian curries.

"And I," Papa said, raising his hand and slapping his chest, "I am Abbas Haji, Bombay's greatest restaurateur."

"Pff. This is France. We are not interested in your curries."

But, later in the story, after taking a forkful of yogurt, rice, okra, and fish, she is brought to tears. "Under all the fire, hidden, brought out by the cool yogurt. There, yes, distinctly there. It's the point and counterpoint of tastes."

"Talent," she said through the muffled clutch of her napkin. "Talent that cannot be learned. That skinny Indian teenager has that mysterious something that comes along in a chef once a generation. Don't you understand? He is one of those rare chefs who is simply born. He is an artist. A great artist."

Inspired by D's new cookbook, we scoured the pages and combined about three or four different recipes to come up with this dish. We wanted to use seafood and I had okra and eggplant. So, this is blended recipe based on something traditional and some pantry-based additions. We thoroughly enjoyed the tang of tamarind mixed with the sweet creaminess of coconut. 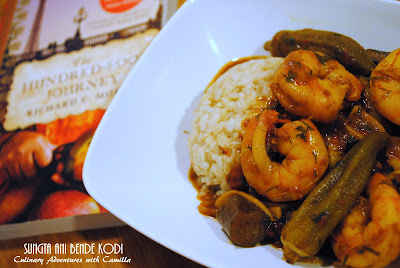 Ingredients
For the Prawns
For the Curry
For Serving


Procedure
Place your prawns in a mixing bowl and massage the turmeric, cumin, coriander into the flesh. Stir in yogurt and place in the fridge for 20 to 30 minutes. 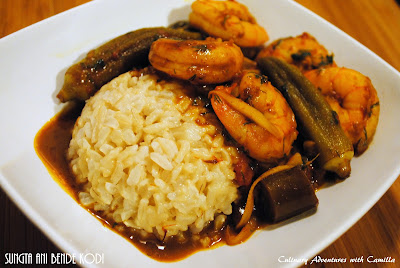 In a large pot, cook the onion, garlic, and ginger until softened and the onions begin to turn translucent. Stir in the spices and tamarind extract and cook for a minute or two longer. Add in the okra, eggplant, and tomatoes. Cook until the tomatoes lose their shape and the eggplant is cooked through. Add in the yogurt and coconut cream. Bring to a simmer, stir in the shrimp and let them cook till opaque. Season to taste with salt and pepper. Fold in the fresh herbs at the last minute. Serve with a scoop of brown rice.