Cook the Books: Grilled Porterhouse with Shitakes and a Side of Greens 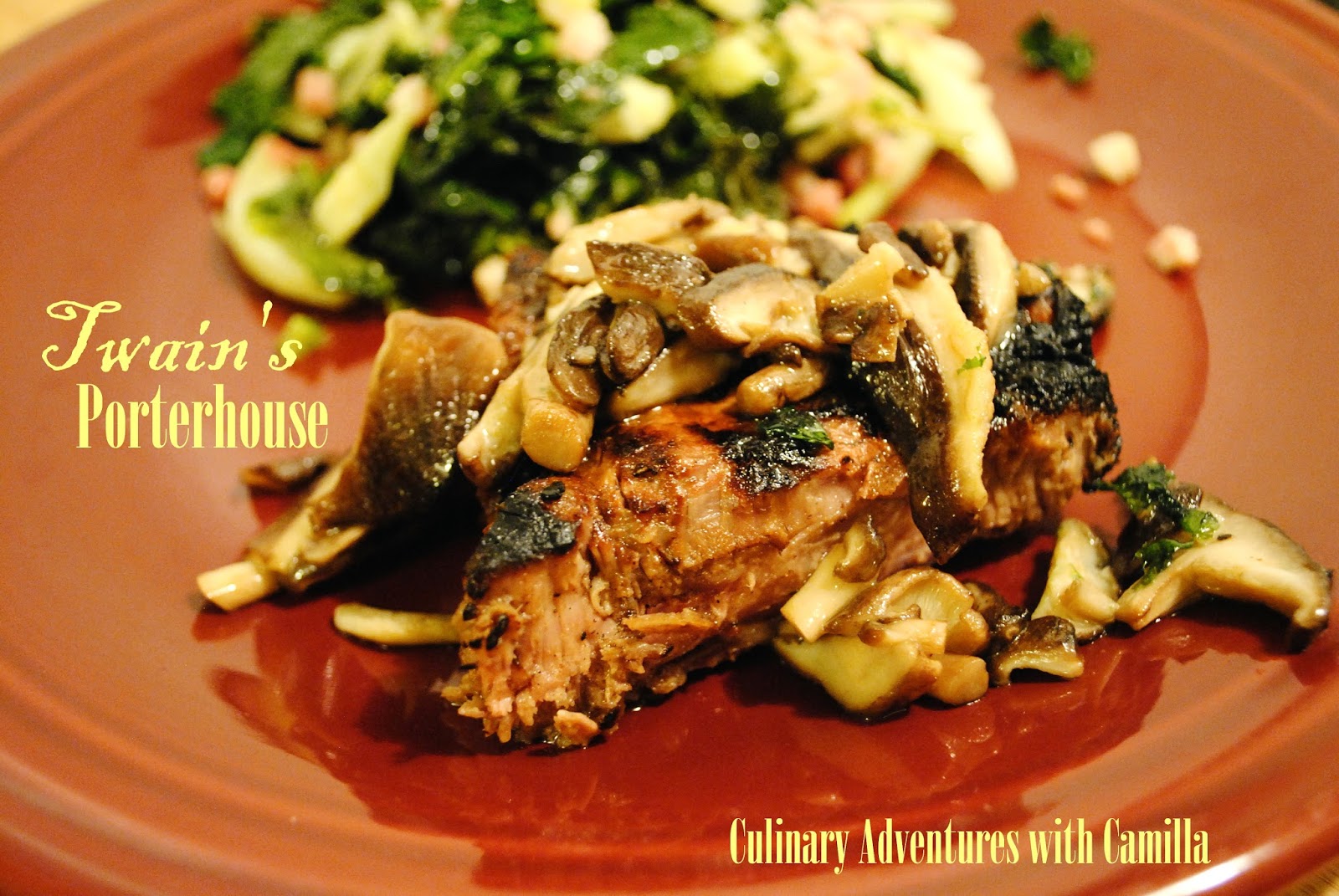 This round Simona, at Briciole, selected Twain's Feast: Searching for America's Lost Foods in the Footsteps of Samuel Clemens by Andrew Beahrs for our February-March Cook the Books project.


I thoroughly enjoyed this book which was rooted in the past - with the food history - and the present - with the writer's own kitchen trials. If you like reading about food, give this tome a try.

I really had no clue that Mark Twain/Samuel Clemens was such a champion of American foods; while others were lauding the sophistication of European cuisines, he longed for some down-home cookin'.

Here is Twain’s “little bill of fare,” in full, from A Tramp Abroad,1880. About eighty different American foods that he wanted as soon as he repatriated...

There were a lot of foods that intrigued me. A similar number repulsed me. If I were starving and in a survival situation, I would consider them. But nothing short of looming starvation would get me to cook and eat possum or racoon. Sorry. And chitlings?!? I've heard that if they are done correctly, you won't even know what that body part used to do. I am not convinced that I am the right cook for that task.

I looked through the list and made notes. I've made Hoe-Cakes. It's our annual Presidents' Day breakfast; we read  George Washington's Breakfast by Jean Fritz and eat hoe cakes with honey butter. I make Cream-Yogurt Biscuits and slather them with homemade jam or cover them with sausage-flecked gravy. I recently tackled Baked Beans with Bacon as a request from Riley because, apparently, my mom opens up cans - Nonna!!! - of Pork'N'Beans for them after school sometimes. My boys are pros at Pumpkin Pie. I don't think I've ever made a peach pie. I made a Tomato-Peach Cobbler last summer as a recipe taste-tester. That got a huge thumbs down from everyone who tried it. But peaches aren't in season right now anyway. I'll put that on my list for this summer.

Eventually, I whittled it down to two: Porterhouse Steak and Southern-Style Fried Chicken. In the end, this description, by Twain, won out...


A mighty porterhouse steak an inch and a half thick, hot and sputtering from the griddle; dusted with fragrant pepper; enriched with little melting bits of butter of the most impeachable freshness and genuineness; the precious juices of the meat trickling out and joining the gravy, archipelagoed with mushrooms; a township or two of tender, yellowish fat gracing an out-lying district of this ample county of beefsteak; the long white bone which divides the sirloin from the tenderloin still in its place. 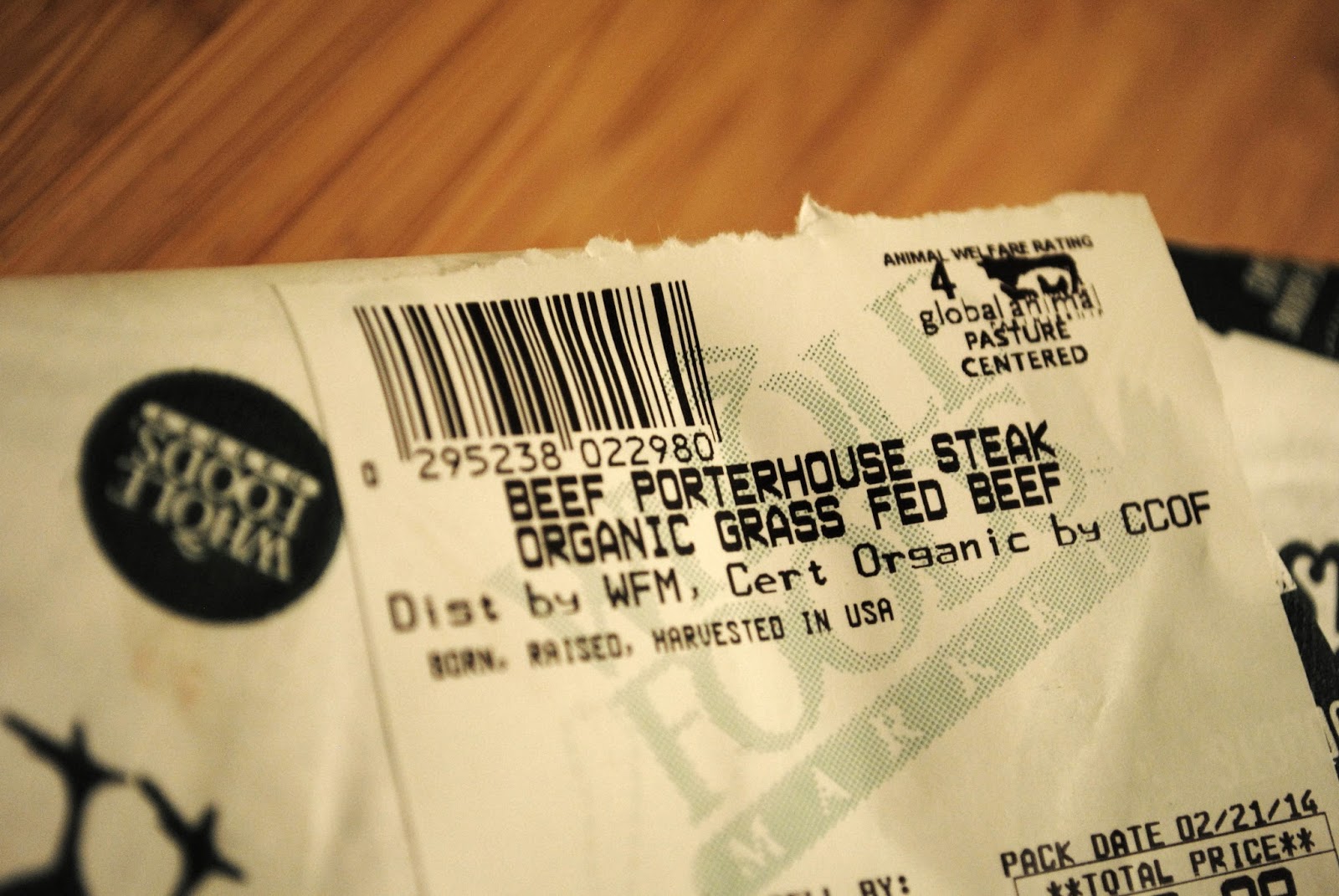 Are you asking yourself What's a Porterhouse? That's what I was thinking. Here's what I found - the Porterhouse is a composite steak. It's basically an over-sized T-Bone, thicker cut, with a lot more of the tenderloin relative to the loin portion. If you de-bone it and cut out the two steaks that basically make up this steak, you get a T-bone and a filet. So if you are ordering a Porterhouse, I hope you're hungry. This fed me and my husband!

I had been telling my friend about this project. So, when he was out of town tonight, while Jake was grilling ours, Brian tracked down a porterhouse of his own. He bragged to me: "Ate all 1.5 lbs!" Holy cow!! 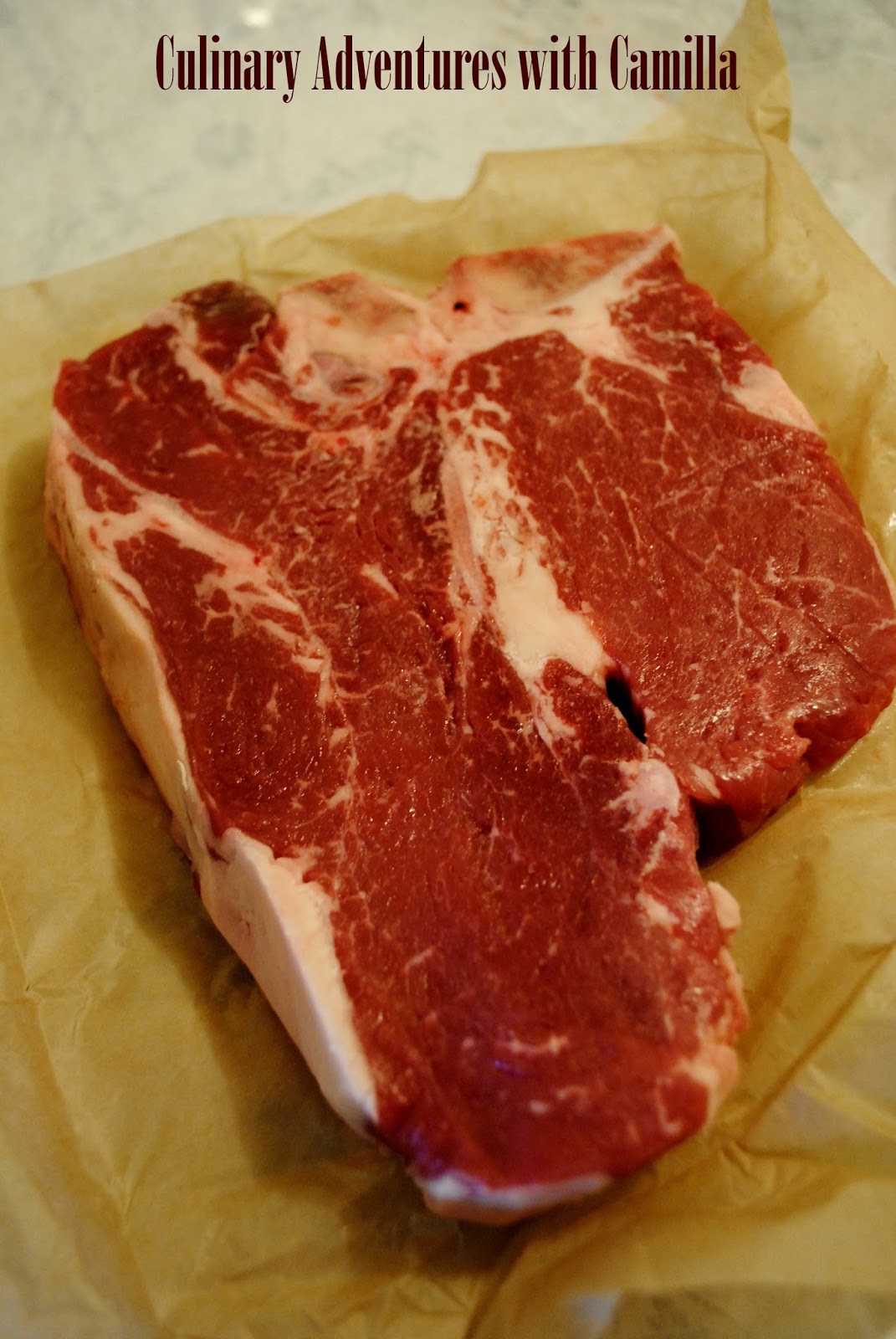 Procedure
In a bowl, combine the first eight ingredients and rub both sides of the steak with equal amounts of the mixture. Drizzle each side with 1 T champagne vinegar. Let marinate a couple of hours; we did two hours. 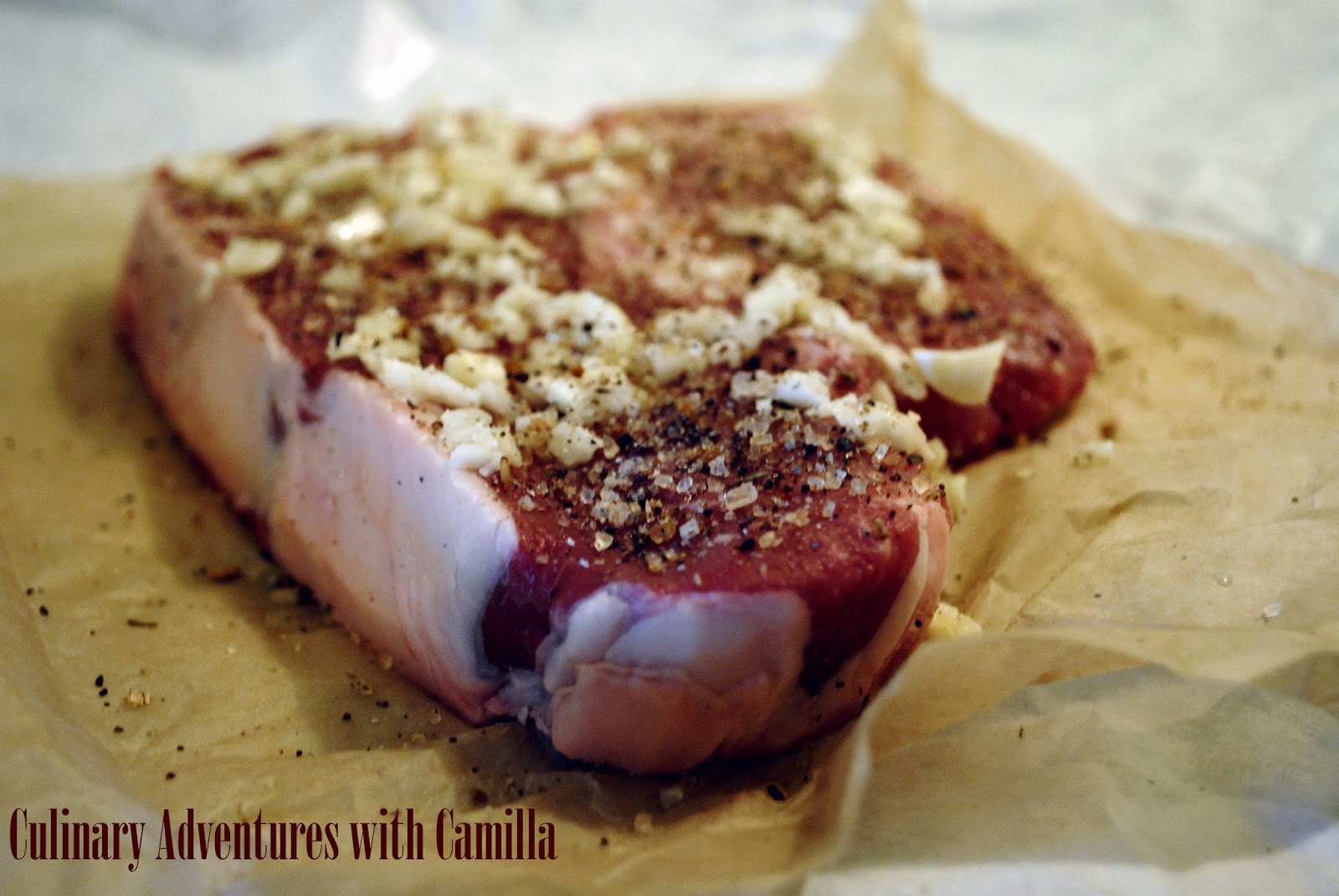 At this point, I hand it to my grill-master Love. I don't know what he does to it. Really. But it comes back into my kitchen ready for resting and slicing. I prefer my meat a little bit more rare than he does, so we usually end up with medium in the thicker parts - for me - and medium well for him. I would rather have medium rare, but this was amazing!

Let the meat rest for 3 to 4 minutes before slicing. 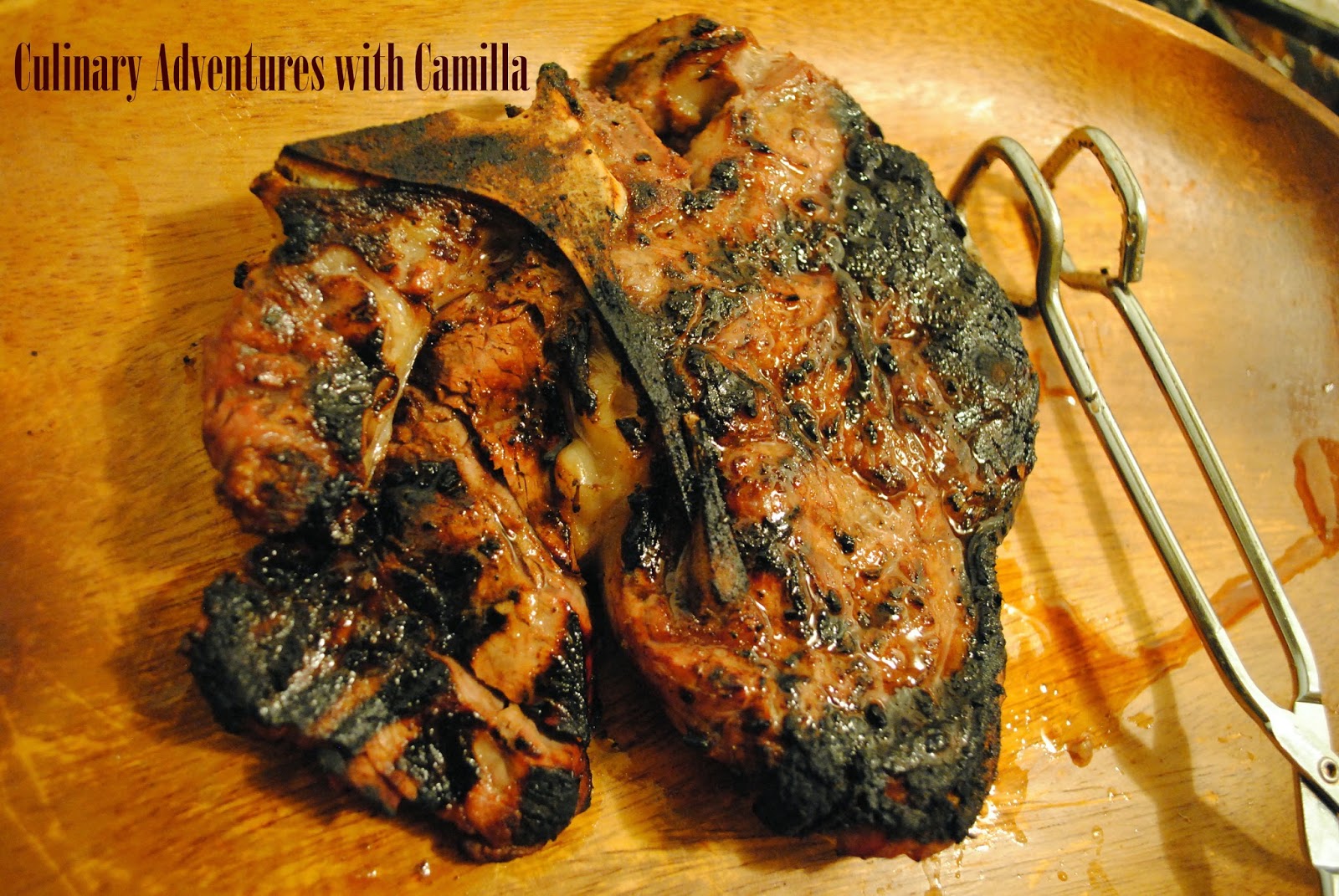 As far as archipelago-ing it with mushrooms, I had some fresh shitake mushrooms from Far West Fungi in Moss Landing, just up the road from us. I love going to get mushrooms them. I simply sauteed these in a pat of butter and spooned them over porterhouse. No seasonings needed because the meat was so well-seasoned.

And, because I always serve something green, I did a quick saute of dinosaur kale and mustard greens with pancetta and thinly sliced fennel. It's probably not what Twain had in mind with his 'Bacon and Greens, Southern-Style.' Well, we loved it. 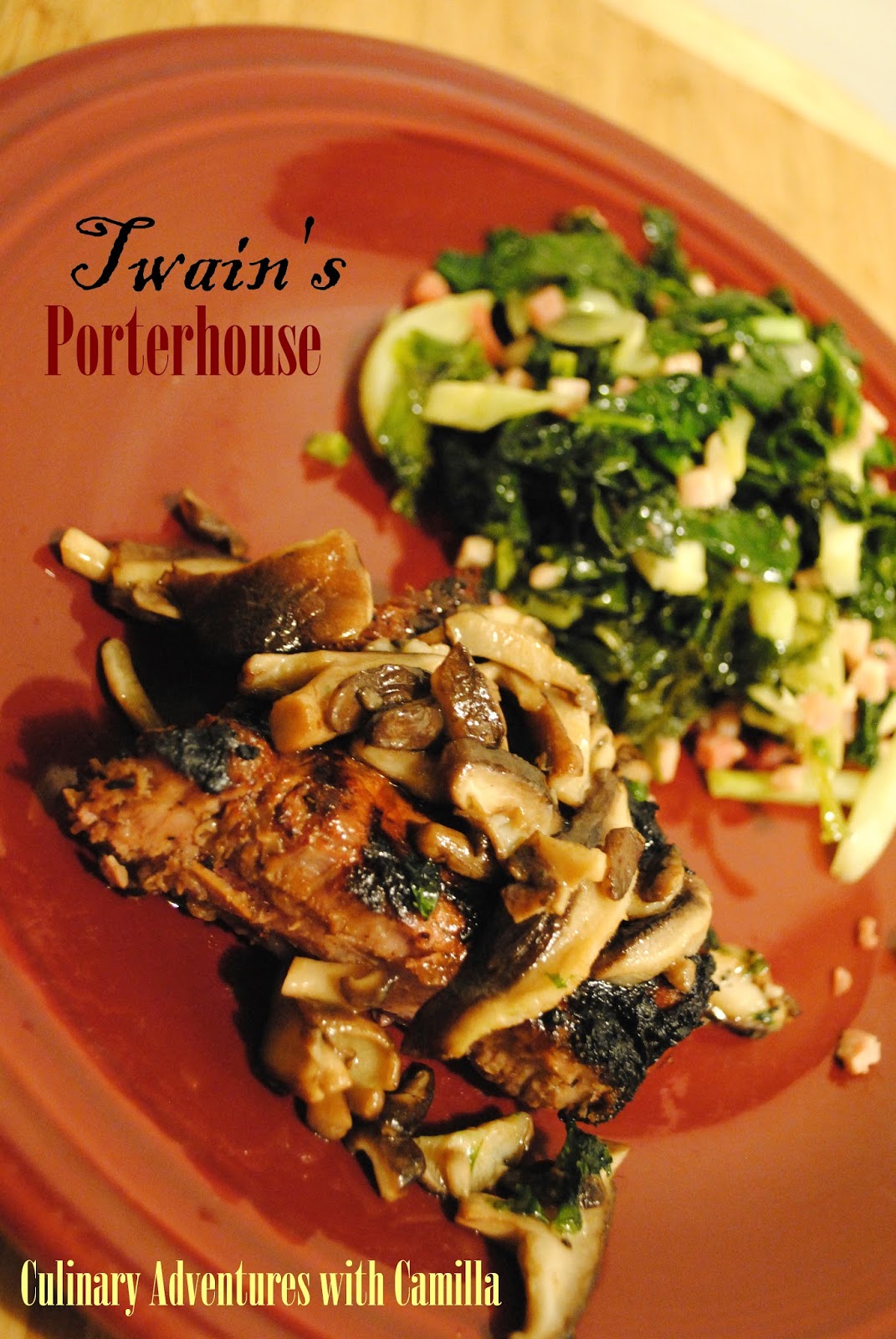 Not quite sure what's up next for the club, but I just started reading The Hundred Foot Journey by Richard Morais for another book group. That is definitely inspiring some food. Stay tuned.