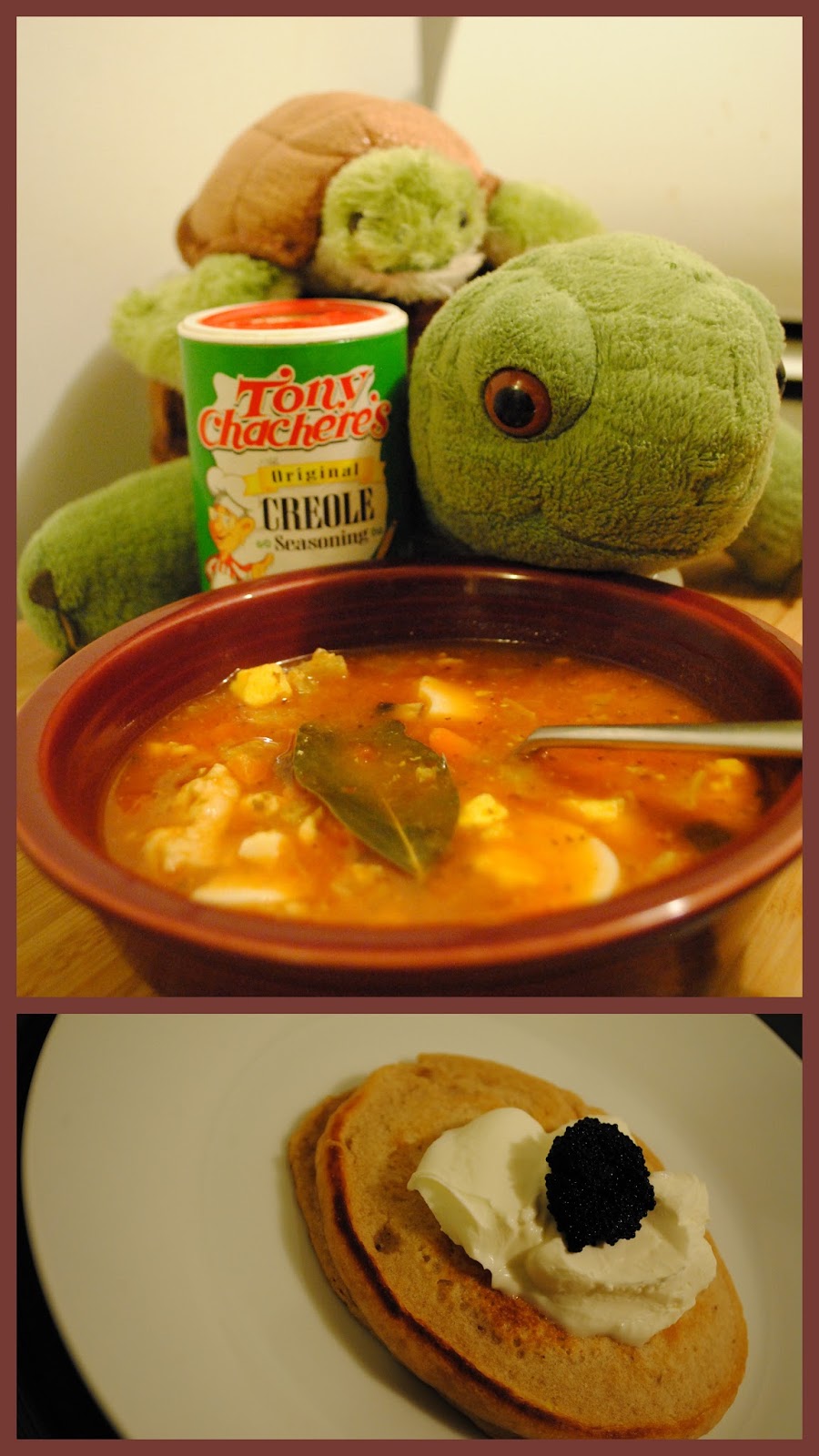 I'm hosting Food'N'Flix this month. Click to see my invitation. In case you're new to the fun and games, Food'N'Flix is a blogging event where we watch movies and head into the kitchen to cook or bake something based on a recipe they actually make in it or just something we were driven to make after watching it.

This month was my pick. And I selected Babette's Feast. Let me set the scene.

In a remote village in 19th century Denmark, two elderly asetics -  sisters Martine and Philippa - are devoted to serving the poor and upholding the teachings of their deceased father. The sisters renounced suitors and all forms of finery, so they dress in drab clothing and subsist on dried, salted fish and thick ale-bread soup.

One day, Babette, a French refugee, arrives on their doorstep, with a letter from Philippa’s former suitor, recommending her as a housekeeper . Though the sisters’ devout lifestyle would normally preclude them from having any servants, they take her in.

Fourteen years go by and Babette is notified that she has won the lottery and will receive ten thousand francs! She offers to cook a genuine French dinner to commemorate the sisters' father's 100th birthday. And what a meal Babette prepares. A veritable feast!

Everything has been specially ordered from France. The scene when all of the strange and exotic ingredients arrive by boat is one of my favorites. A live turtle; a cage full of quails; crates of wine and champagne; and beautiful, tropical fruit are all delicious oddities that parade into the sisters' home.

The dinner scene - the feast - begins with beautiful restraint. There are no sounds except the gentle clinking of silverware against china, but the guests' facial expressions convey that their taste buds are in rapture.
I am not going to reveal anything else...in case you want to watch for yourself and create something for Food'N'Flix. Suffice it to say, Babette is, as she declares “a great artist!”

I couldn't decide on a single recipe. So, I opted to make two of her dishes. 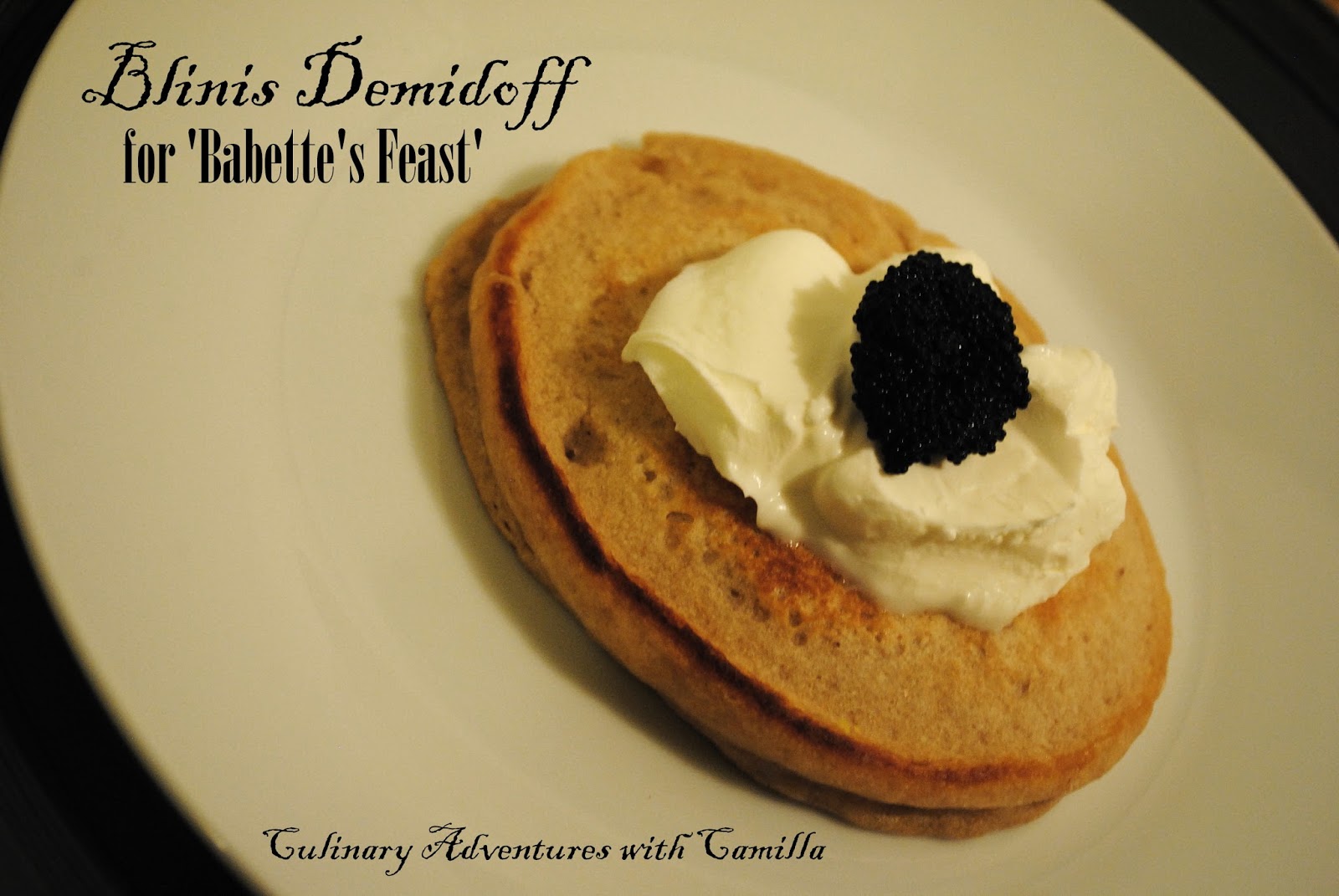 Place the two flours in large mixing bowl and stir to combine. Place the egg yolks, beer and milk in another bowl and whisk together. Gradually add in the flour, beating until it forms a smooth batter. In a separate bowl, beat the egg whites until stiff then fold them into the batter.

Heat enough oil in large flat-bottom pan to just cover the base. Once heated, drop tablespoons of the batter into the oil, spacing them a little ways apart. Cook in batches for 2 to 3 minutes per side until golden brown. Garnish with a spoonful of crème fraîche and a dollop of caviar. 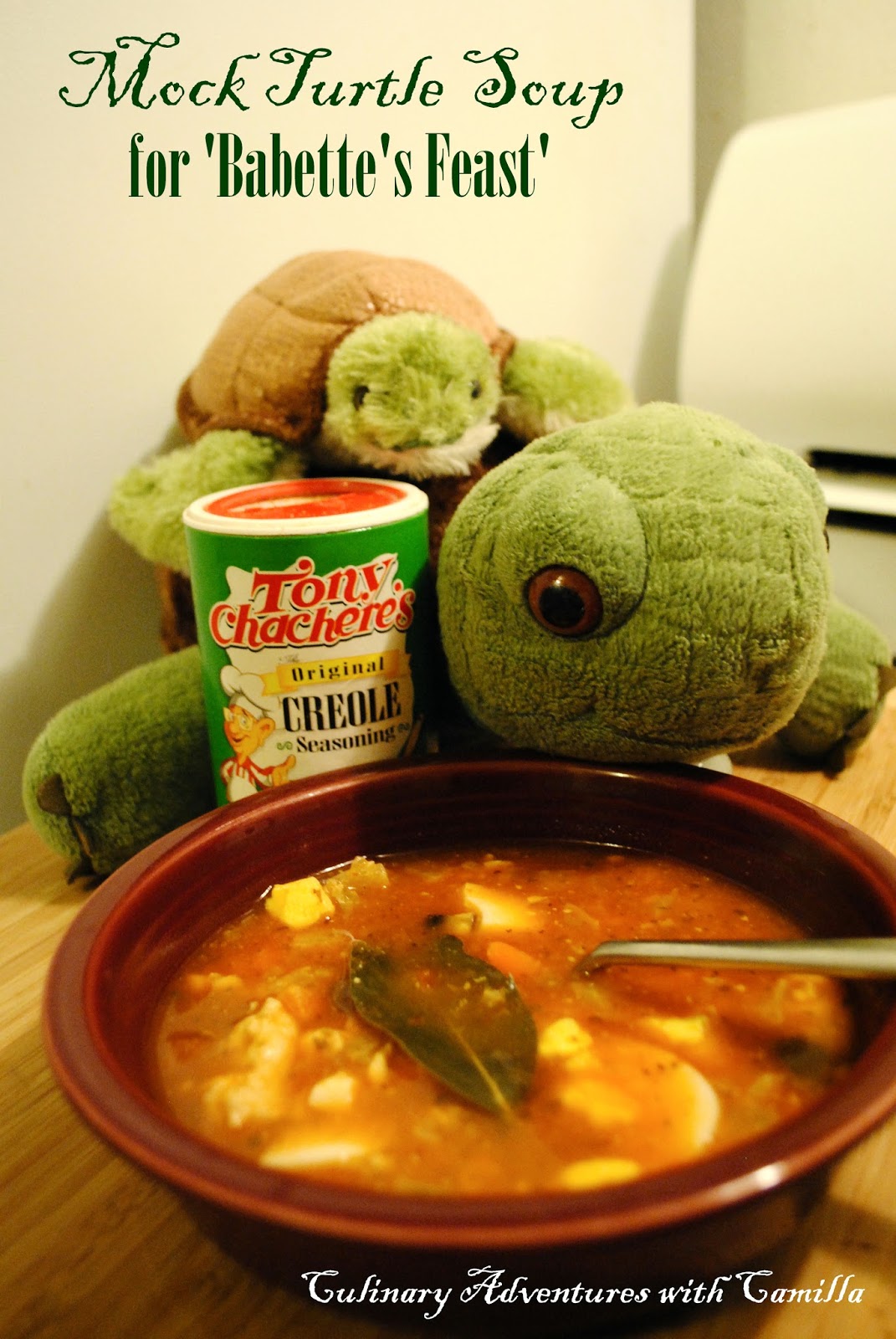 It's no secret that many cooks used veal to create their "turtle" soups. Not only would I not cook a turtle, but I also don't eat veal. I found a New Orleans recipe for mock turtle soup and swapped out the veal for turkey.

In a large soup pot, heat oil and sweat onions until they soften. Add in carrots and celery and cook till fork tender. Stir in the turkey breast and cook through. Season with paprika, Worcestershire sauce, salt, pepper, and Tony Chacheres. Stir in the flour, then, pour in the stock, tomato puree; add in the bay leaves. Bring soup to a boil, then reduce heat and simmer uncovered till it's the thickness that you want. Peel and chop eggs finely. Stir the eggs into the soup. Remove bay leaves and stir in the parsley. Adjust seasoning.

So, that's it. My take on Babette's Feast. If you want to join me, please do. I'll take submissions until February 25th.