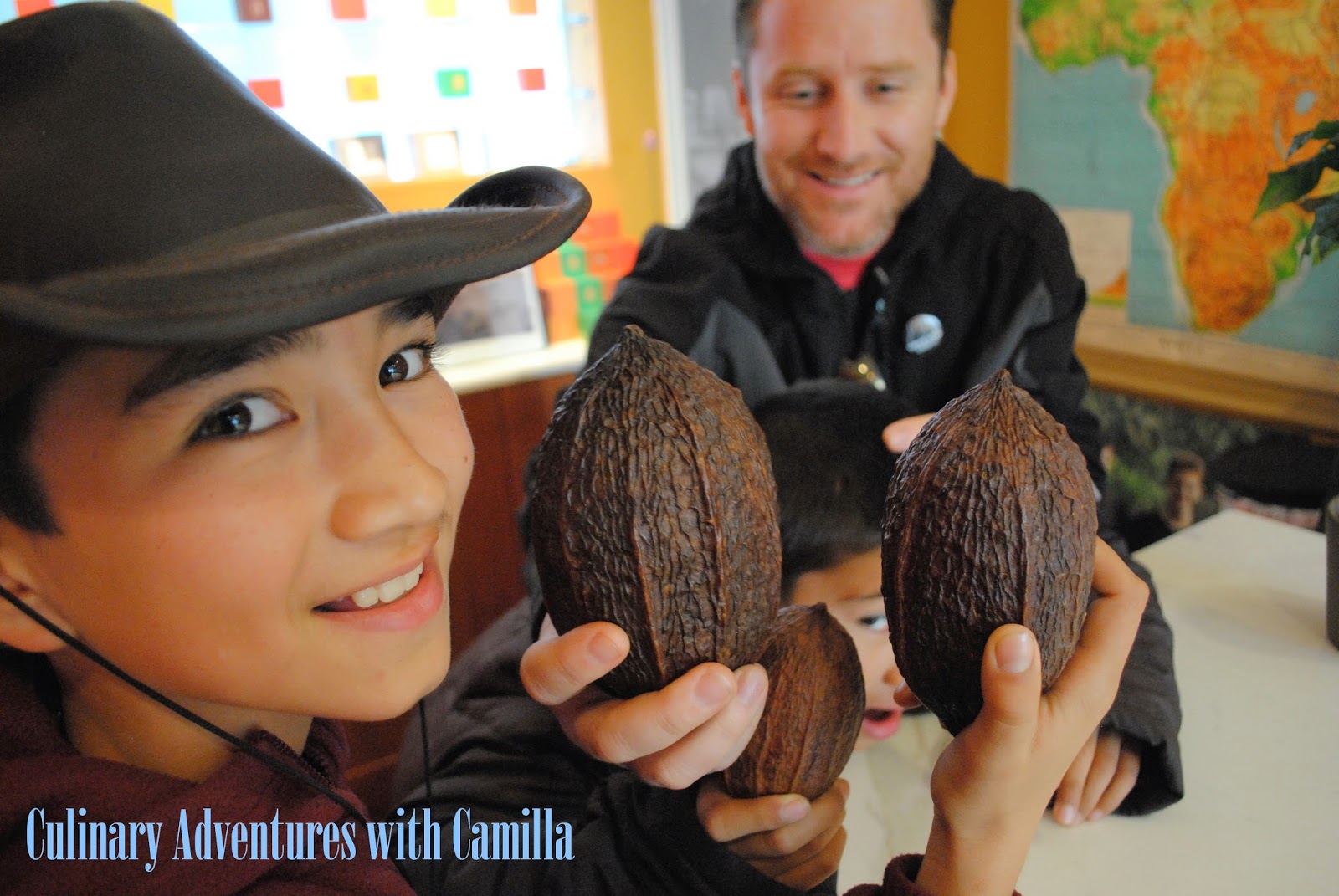 For those who knew me pre-kids - and definitely pre-blogging - this is not news. For the rest of you, this might come as a surprise given, well, given all of these posts: Strega-Spiked Saffron Truffles, Brandy-Earl Grey Chocolate Cake, Sinfully Delicious Chocolate Pudding, and Spiced Chocolate Risotto.

Plus I've hosted Chocolate + Brandy Pairings on the beach for friends; I've made Homemade Snickers for my friend's birthday. And I even did an entire chocolate-infused picnic for friends between their Willy Wonka performances. For that lunch, I served Roasted Parsnips and White Chocolate Soup, Chocolate Crostini, Roasted Chicken with a Chocolate-Balsamic Vinegar Glaze, and some assorted boutique chocolate bars for a sweet ending.

What a difference twelve years can make! Now, I would confess that chocolate is definitely one of my more ardent culinary passions. And I'm always striving to learn more about it. So, for our 2014 family Valentine adventure, I booked a Chocolate Tasting Tour for us all at Alegio Chocolaté in Palo Alto. 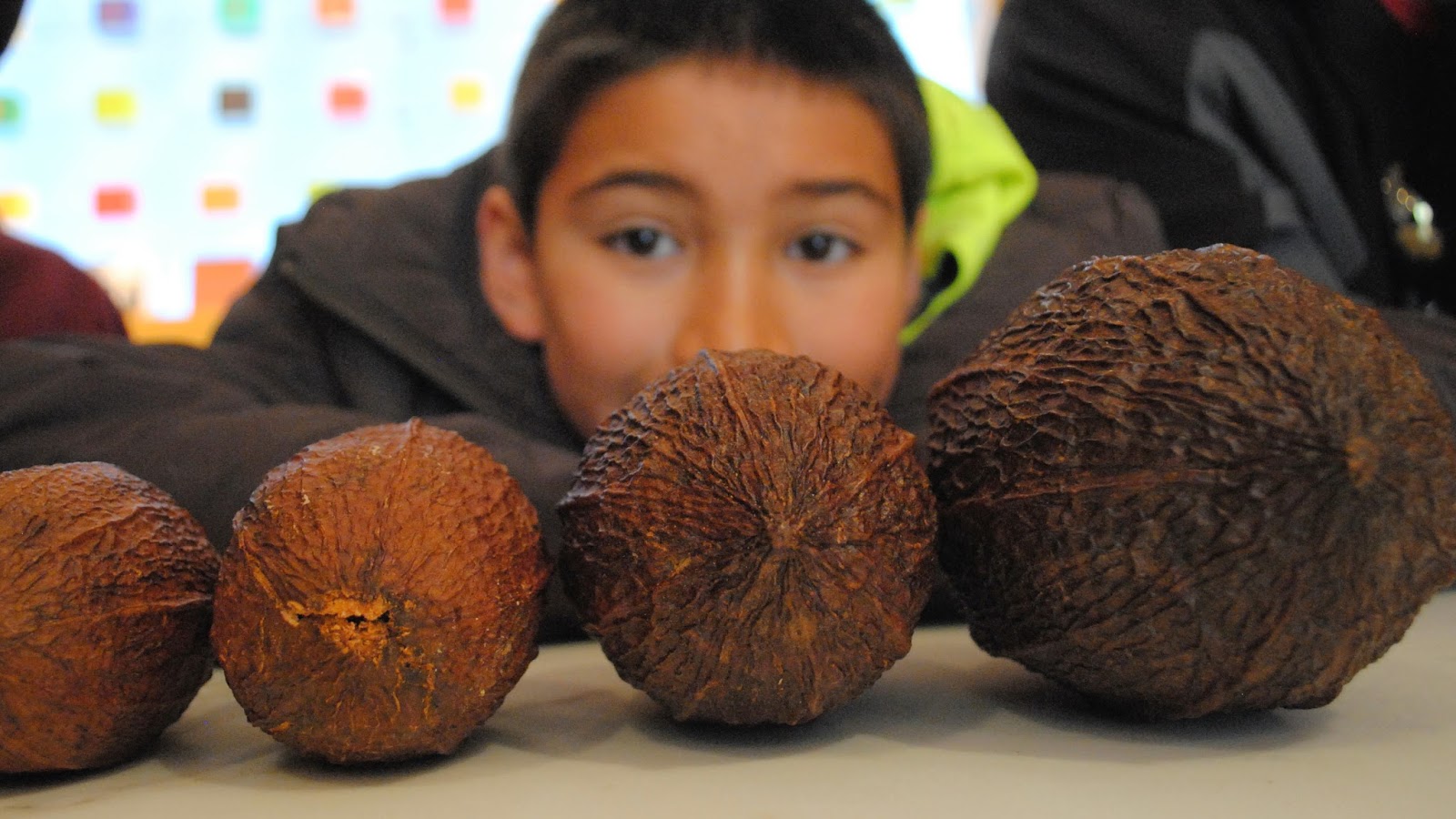 I appreciate that there are some immensely talented chocolatiers crafting artisan bars, but from a philosophical standpoint, I am wildly impressed with Claudio Corallo and Alegio Chocolaté. Not only is he making amazing chocolates, he's completely bean to bar. That's a rarity. And I'm a fan!

BBC's Full on Food traveled to Claudio Corallo’s Terreiro Velho cacao plantation on the islands of São Tomé and Príncipe. Watch the clip below.


There are many, many steps to transform cacao pods to beans, and, then, to chocolate bar. Think cultivating, harvesting, fermenting, drying, roasting, winnowing, grinding, and tempering. That's a lot of steps that, for mass-market chocolate, can result in a finished chocolate bar that is completely devoid of the characteristics of the actual bean.

Our tour guide, Panos Panagos - who co-owns Alegio with partner Robbin Everson - said that they identified themselves as farmers, not chocolate-makers. And he likened the process of making chocolate to making wine. "Just as you have to have good grapes to make good wine, you have to have good beans to make good chocolate. You can make mediocre chocolate from good beans, but not the other way around." Makes perfect sense to me.

One way that Claudio Corallo differs from almost all other chocolatiers: he grows the cacao himself on the tiny islands of São Tomé and Principe, just off the Western coast of Africa. Other chocolate makers must source their cacao from farmers; Claudio has his own. And he's incredibly particular about the cacao pods he harvests. That fastidiousness carries through the entire chocolate-making process, with Claudio paying close attention to the little details. Here's an example... 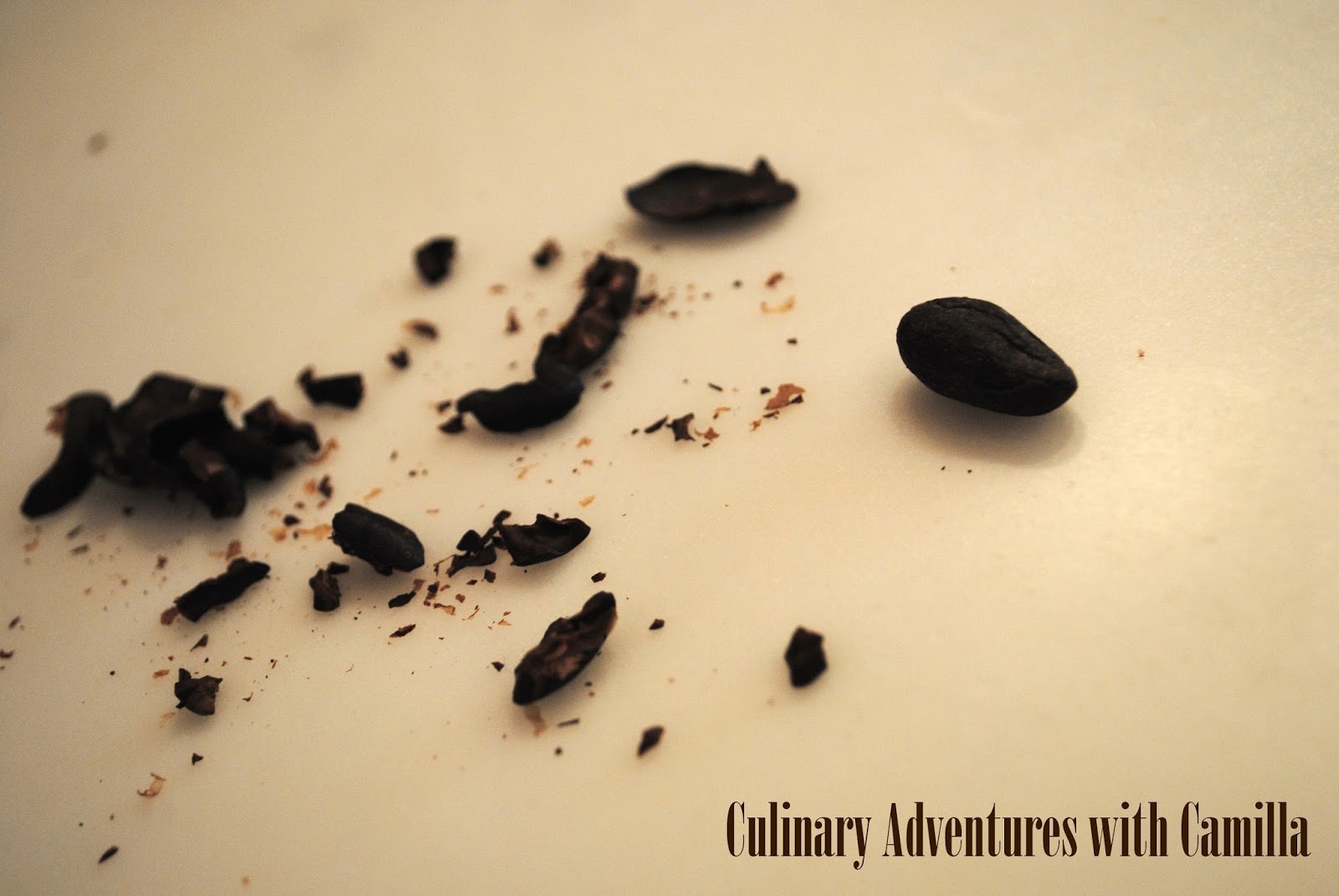 Each cacao bean starts from a germ, a fibrous bit about 1 centimeter long. It tastes bitter and has a woody texture. Most chocolatiers leave the germ in because it’s arduous to remove it. Claudio insists that the germ be removed. So his staff cracks each bean and extracts the germ by hand before it's ground. By hand. We watched them doing it on a screen and we gave it a shot. They deftly removed the germ, making it look easy. It was tough.

The end result of Claudio's approach to making chocolate is that the chocolate tastes like the beans.

Now to the fun part - the tasting notes. We were instructed to savor the chocolate as we would a fine wine. We smelled it. We pressed it against the roof of our mouths to warm it. And we were admonished not to chew it. Don't chew. Got it!

It was funny to watch the boys concentrating hard not to chew the chocolate. 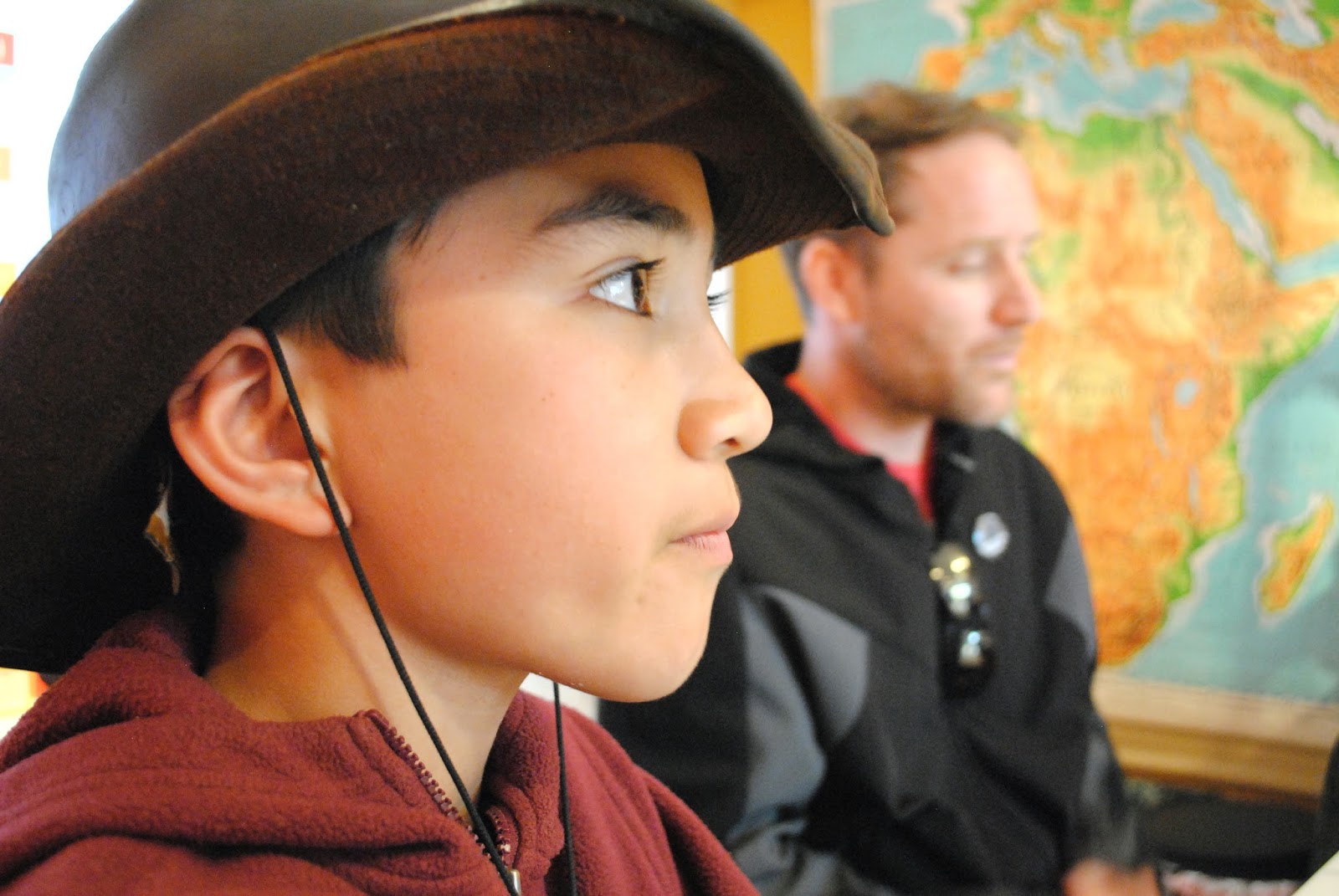 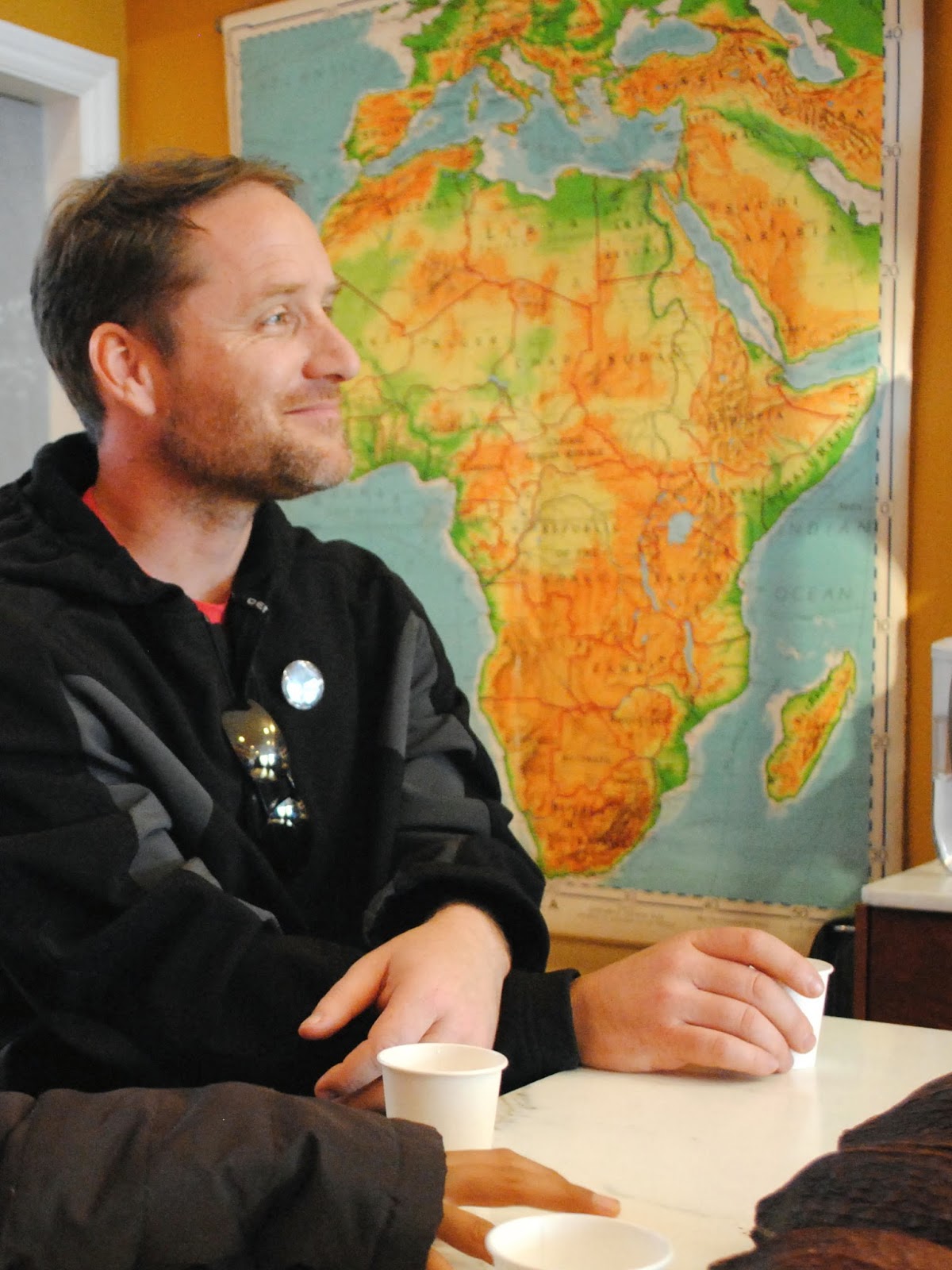 The percentage of chocolate listed on a bar is the percent that is cacao; the remaining percent is sugar.

Surprisingly, it wasn't at all bitter. It was earthy, smoky, and aromatic. I’ve never had any chocolate like this before. It tasted wild. Feral. Like the damp foliage on the tropical forest floor. And I mean that in the most complimentary way. In the end, I ranked the 100% was my favorite chocolate of the tasting.

Next we tried an 80% with raw sugar that was a textural circus on your tongue - silky smooth chocolate with a shock of  crystallized sugar. A velvety 75% followed. And then a 73.5%...who does that?! Mavericks, he joked. The 73% was the cacao and the .5% was the nibs. 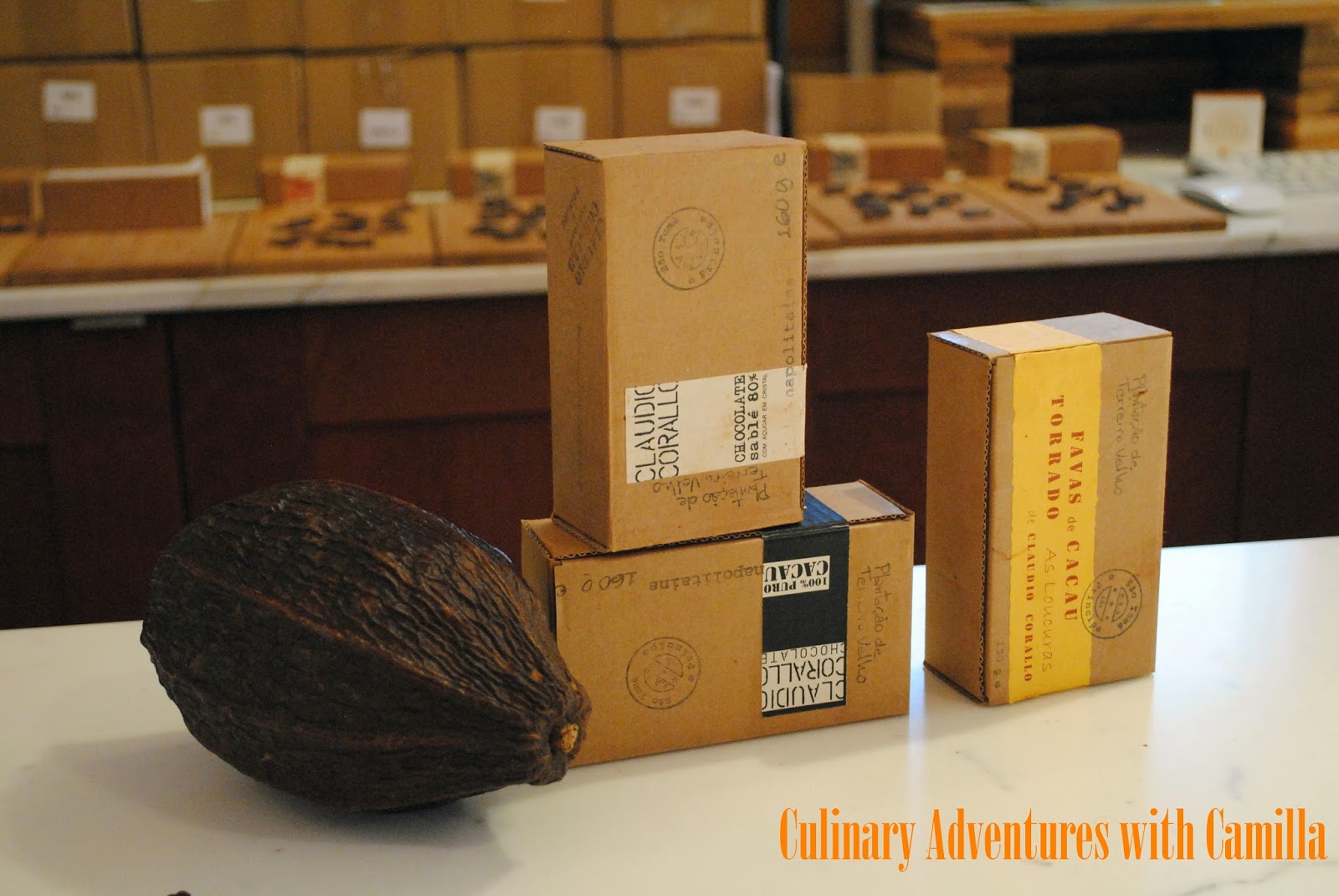 Despite Claudio's fervent adherence to the purity of his chocolate, not all of the bars are chocolate alone. There are inclusions—and each is done in a very exact manner that resulted in a subdued flavor. The resulting taste was familiar yet simultaneously mysterious. We tried a 70% with orange, one with ginger, one with salt and pepper, and one with a grappa-infused grape. O dio! 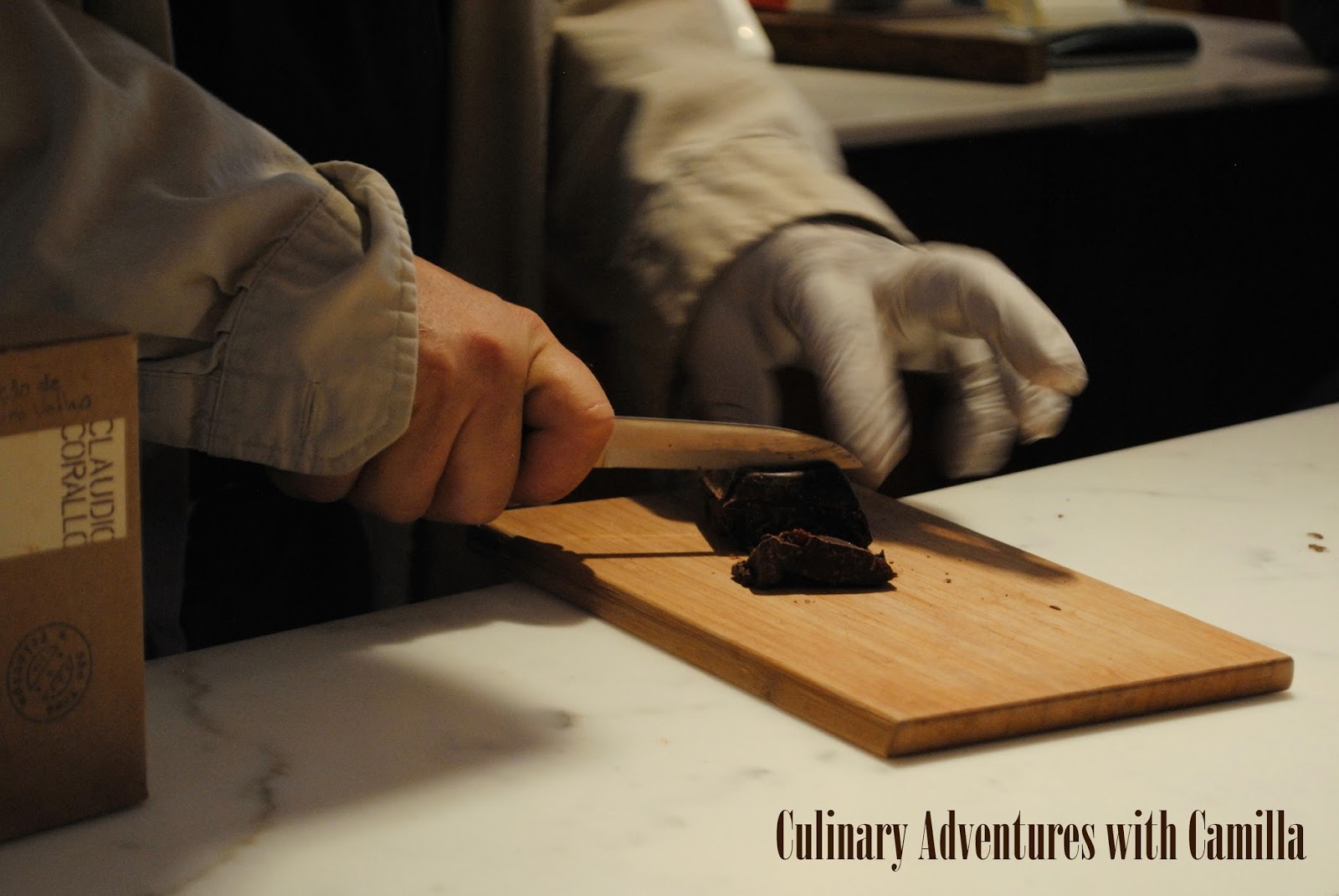 After we tasted the chocolate, Panos shared some coffee from beans on the plantation. I love coffee just about as much as I love chocolate! I was in heaven. While we sipped the coffee, we ranked our favorites. Here's Riley's card...he liked the ginger, first. Salt and pepper, second. And orange, third. 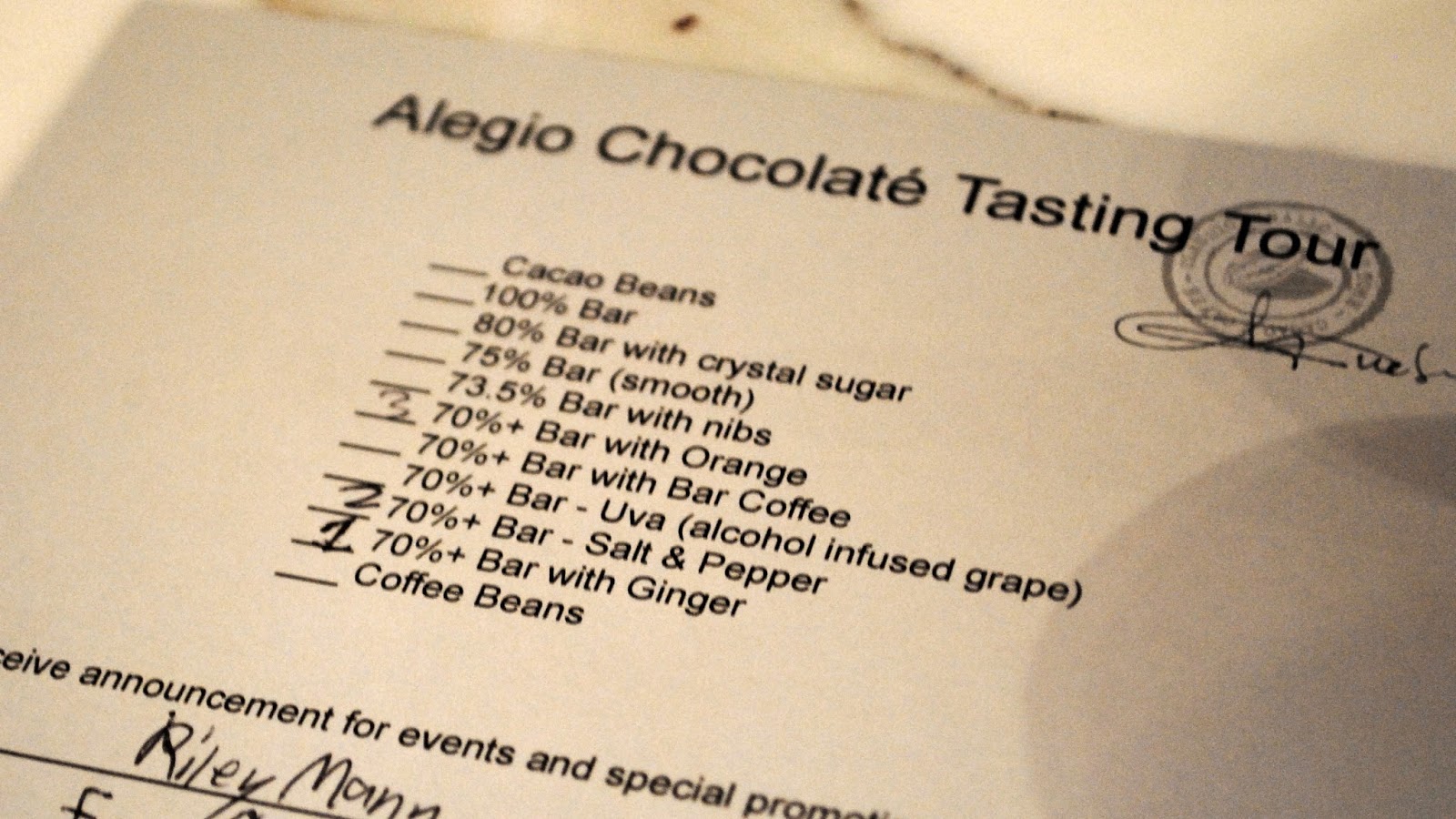 I have to say that I had a tough time picking my favorites. They were all outrageously good...with such a high quality. I liked the 100% best of all. Then it was a toss-up between the grappa, ginger, and salt-and-pepper. 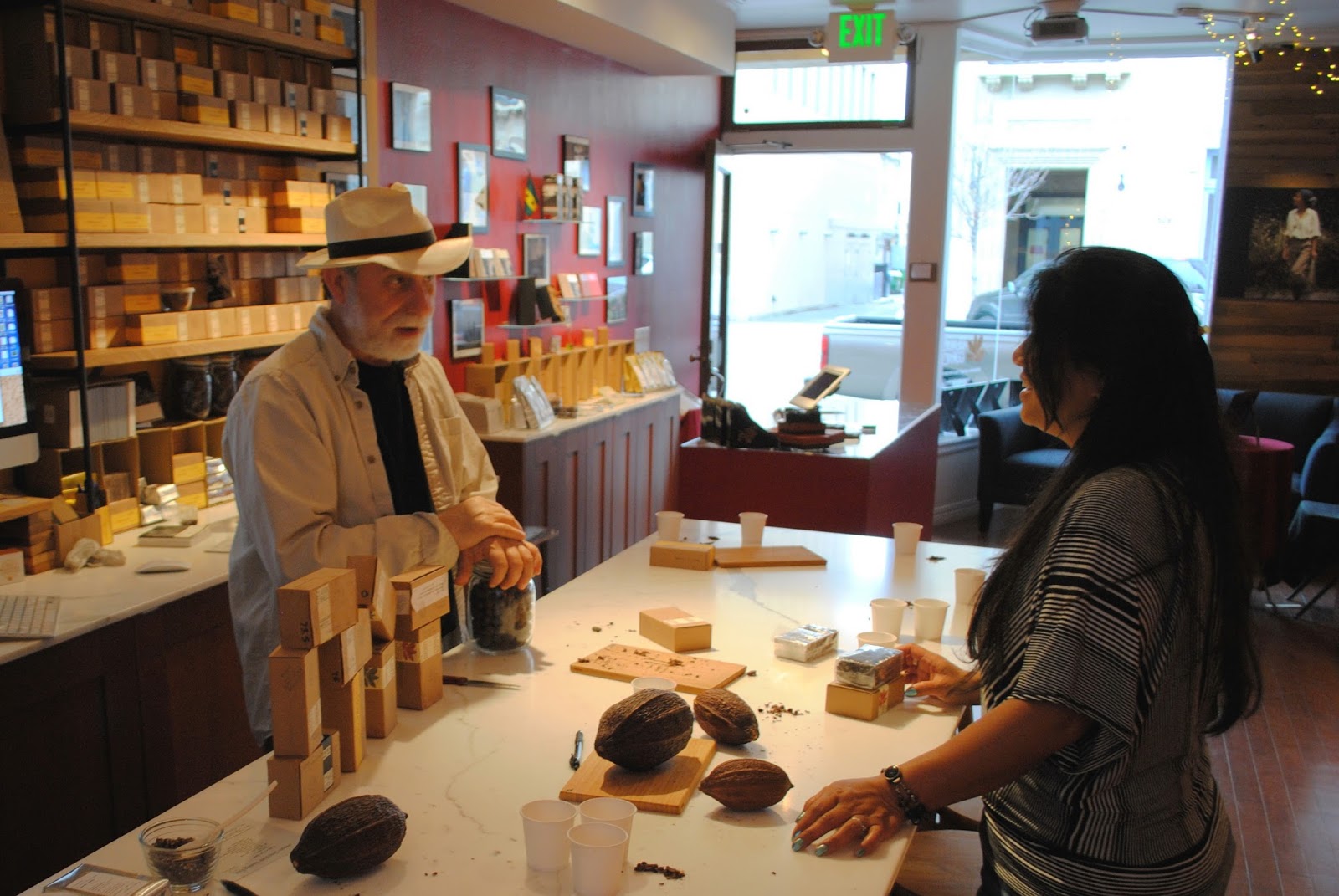 This was the perfect way to spend part of our Valentines' weekend! The chocolates themselves are fantastic. Then you get the back-story and you can taste the integrity of the chocolatier. You can smell, feel, and savor the difference.