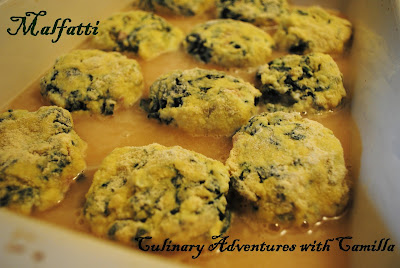 Malfatti di Ricotta e Cavolo Nero. "Badly formed" dumplings with ricotta and kale. Also known as 'dinner'! I was running out the door to for an assignment, but needed to whip something up that would not require many more instructions than: take out of the oven and serve. 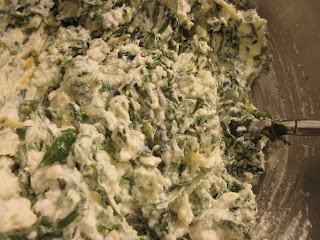 These are so easy and pillowy soft. Traditionally they are made with spinach, but I had some kale from my WE Cooperative CSA box from Fogline Farm, so I used that.


Saute the kale and green garlic together until wilted. Let cool. Pour the chicken stock in the bottom of a baking dish, add the lemon juice and a splash of olive oil.

Preheat the oven to 350 degrees. Place all of the other ingredients - except the corn flour - in a large mixing bowl. Blend with a fork until everything is well incorporated. Place the corn flour in a separate bowl. With moistened hands, form tablespoon-sized portions into balls. Roll them in the corn flour and place them in the baking dish. Leave some room between the malfatti.


When the dish is full, bake for 25-30 minutes until the dumplings are slightly browned. Serve hot, sprinkled with a little bit more parsley and lemon zest and drizzled with olive oil.

I didn't get a "finished" shot because I was down the coast with one of my best friends at a wine dinner. More about that later. 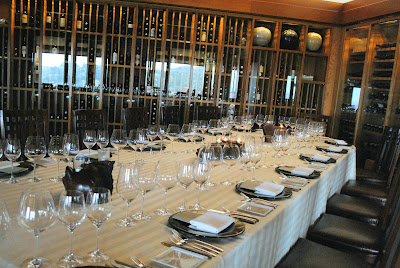