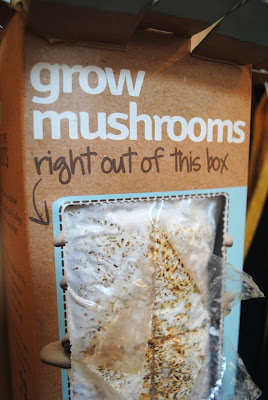 For Jake's birthday, I planned a 'Fungi Feast for My Fun-Guy' and one of our friends gave him a Grow-Your-Own Mushroom Kit as a present. Fun.

Only, he forgot about it until he noticed that a mushroom was pushing its way out of a box. Funny.

So, he hung it on a hook in the kitchen and dutifully sprays it to keep it moist. Today, he told me that it was time to cook the renegade mushroom that was not 'following the directions' and was sprouting out of the top instead of out of its grow hole. Really funny.

I had never seen a kit like this. Then we went to the Maker Faire Bay Area and the Far West Fungi booth had them for sale. Far West Fungi's webstore carries a shitake mushroom kit. And you can also get an oyster mushroom kit online at Uncommon Goods. 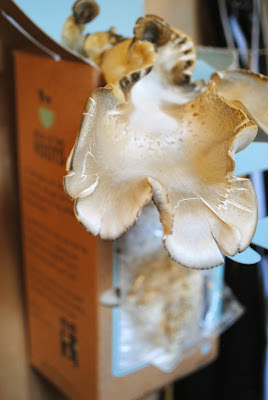 I carefully cut off the lone mushroom, sliced it up, and included it in our stirfry for lunch.

Brown the garlic in a splash of olive oil. Add the ground turkey and cook until the meat is thoroughly cooked, approximately 5 minutes. Add broccoli shoots, carrots, and dinosaur kale and the mushroom, cut into long strips.

Add 1 T soy sauce and 1/2 t patis (fish sauce) to the pan. Place a lid on the pan and steam until the carrots are fork tender. Before serving, stir in a splash of sesame oil and 2 T chopped cilantro. Serve over a bed of rice. 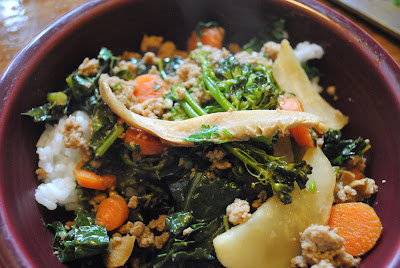