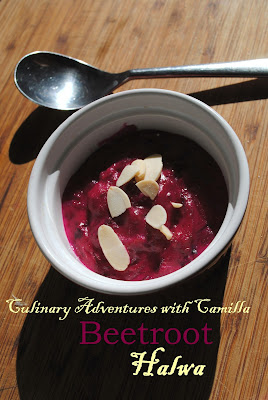 This is my third month participating in Taste and Create and I was assigned to Sara's Tasty Buds. There were so many recipes that I wanted to try, but I had my heart set on one of her halwas. She has a cornflour halwa, a wheat flour halwa, and even a lentil halwa! But I decided to make her Beetroot Halwa because I already had some leftover roasted beets in my fridge...and I've never heard of a halwa made with beets before. We did make a carrot halwa once that was delicious and easy!

My only stumbling point was 'khoa.' I had no idea what that was, but one site suggested it was similar to ricotta, so I went with that. Also, I subbed almond paste for her cashew paste and butter for ghee. I know, I know, purists are rolling their eyes, thinking that I should have gone to the store. But it was the end of a long and trying week. I was going for easy. And it turned out great.

Place all of the ingredients in a large flat bottom-pan. Cook over medium heat, stirring constantly, until the mixture is well-blended and warmed through. Spoon into individual serving dishes and let cool slightly. 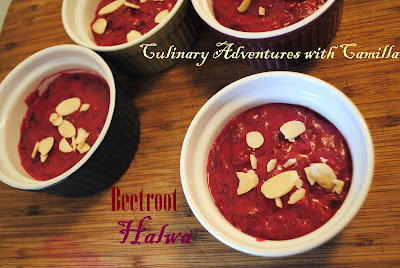