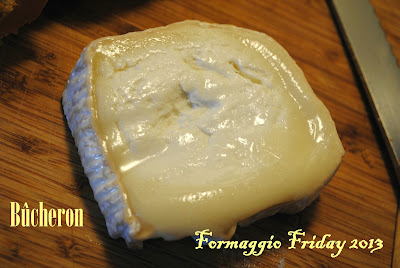 'Se prendre pour un bûcheron.' The phrase just popped into my head when I saw this cheese. He thought he was a lumberjack. What?! Where did that come from?

Sort of like when I had Jake listening to Italian CDs before our trip in 2001. I remember he sat straight up in bed one night and said - with perfect pronunciation, I might add - 'Dove posso parcheggiare la macchina?" I burst out laughing when he asked, "What did I say?!" So the CDs were sort of working. But since he wasn't going to be driving while we were there, asking where he could park the car wasn't really a useful phrase to know.

'Bûche' means log in French and is the root word for the name of this log-shaped French goat cheese. Bûcheron is a lumberjack, I think. My French is rusty.  It's made near Sevre et Belle in the Loire Valley of France. 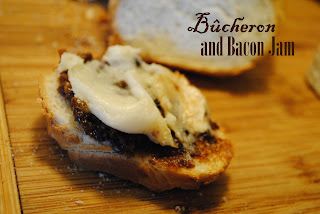 Each slice provides a glimpse into the ripening process for this soft cheese. In the center, the crumbly, chalky interior tastes lemony. As the log ages, it turns creamy, but more pungent.

I spread a baguette slice with Bacon-Fennel Jam and smeared it with bûcheron.

The boys all thought it was a little barnyard-y. Oh, well. More for me!