By Camilla M. Mann May 07, 2013
Elizabeth from The Law Student's Cookbook is hosting Food'N'Flix this month. And her pick - Delicatessen - is one I haven't seen in over twenty years when I saw it in the theatre. I went through a stage, in college, when I only watched foreign films. This was one of them. Click here to see Elizabeth's invitation to her movie selection.

Delicatessen is definitely an anamoly. I don't think that it fits into a single genre of film. It's part black comedy, part tragedy on the Shakespearan scale, part romance, and part post-apocalyptic horror. It's certainly a bizarre, grotesque fantasy. Intrigued?

Here's a brief run-down of what you can expect...

Quirky characters in a future France stave off starvation by eating people. Cannibalism isn’t humorous — I'm currently reading an account of the Donner Party who survived by eating their recently deceased family members — and yet this movie is genuinely funny. Some parts are down right hilarious.

A former clown Louison answers a newspaper ad seeking a handyman to work in exchange for room and board. Unfortunately, the building owner, also the neighborhood butcher, is actually advertising for meat. The community in his decrepit apartment building has survived by eating the men who answer the ad. This plan worked well until Louison comes along because — here's the romance part — the butcher’s daughter Julie becomes enamoured and involved with her future meal.

You know how they say that if you raise animals as food, you shouldn't name them! Same for this. If you plan to eat someone, don't fall in love with them. Makes sense, right?!?

One thing this re-watching did not inspire was a glut of cooking. While I liked the cinematic effects, sets, and lighting of the movie, they did not inspire me to run into the kitchen and cook something.

I was reminded of the first time Dylan (who was, maybe, 3 years old at the time) asked me about the rack of ribs in the shopping cart. He said, "Mommy, what are those?" Ribs, I answered. His chubby little fingers went to his side and he declared, "These are my ribs!" Yes, that's true. Horror contorted his little face and he whispered, pointing into my shopping cart, "Whose ribs are those?!?" Not a person's, I assured him. "Then who?" he demanded.

Needless to say, he didn't eat the ribs that night. He knows meat comes from a living animal. But, I suppose, ribs were a little too recognizable. For the rest of us, ribs are a favorite!  I braise the ribs, then marinate them with a sauce overnight, and finish them in the oven the next day. 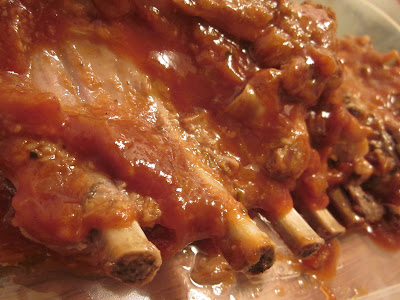 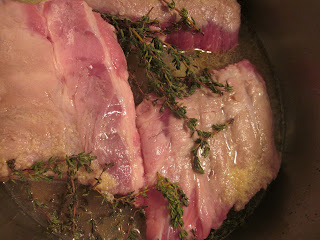 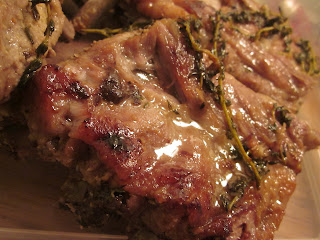 I sliced the racks into pieces that could fit in the bottom of my pans. I browned smashed garlic in a splash of olive oil then quickly seared the ribs to seal in the juices. I added in the thyme, poured in the wine and honey, brought it to a boil, covered it, and reduced to a simmer.

Let that simmer for 2 hours. The meat will be so tender that it's almost falling off the bone.

Slather the ribs with the sauce and let sit overnight in the fridge. Before serving, brush the sauce all over the ribs - again - and bake, covered in foil, in a 300 degree oven till completely warmed.


If you want to join the fun, you still have time.
Submissions are due to Elizabeth by May 29th.

And next month, I'm hosting. We'll be watching, or re-watching as the case may be, Jiro Dreams of Sushi. Stay tuned for my official announcement and invitation. Hope you'll join the fun.