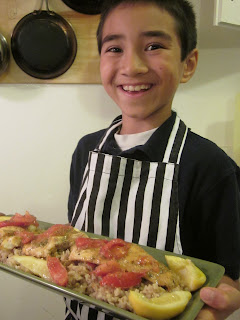 I found several references to "spicy fish" as the traditional accompaniment to muhammar, but it was this post from another blogger (Elle from Where the Food Is) that I used as a guide. Elle is also cooking her way around the globe. Hers was the first reference I saw to serve this with preserved limes. Serendipitously my preserved lemons were just finished. Perfect! 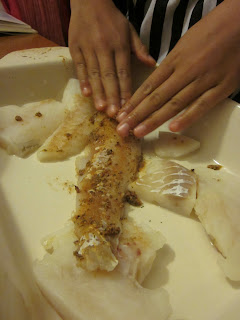 Riley, half-joking, called this dish "itchy fish." After he rubbed the filets with spices, his hands began to itch. I have no idea to what he was reacting; he's eaten all of these things separately. But something caused a reaction with him. Still he ate it with no problem.
He rubbed the filets with a mixture of minced garlic, ground paprika, curry powder, dried dill, ground cumin, freshly ground pink Himalaya salt and flower pepper. 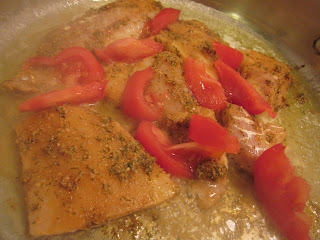 Traditionally this dish is baked, but I pan-fried the fish in butter with some fresh tomato slices.
Serve with muhammar and preserved lemons.