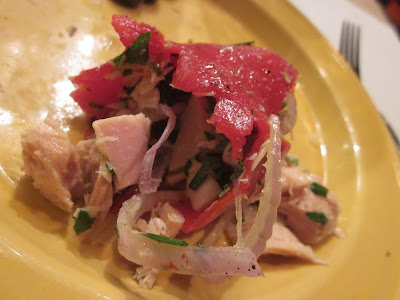 Piquillo peppers are closer to a pimento chili than a red bell pepper. They are common in northern Spain and their name, piquillo, means 'little beak.' When they were stuffed, they reminded me of tulips.

Drain peppers and set aside. Remove tuna from oil and place in a medium-sized bowl. Add shallots, parsley, olive oil, and salt and pepper to taste. Stuff each pepper with the tuna mixture and drizzle with olive oil.