Australia: Cooking Around the World with Camilla (CATWWC) 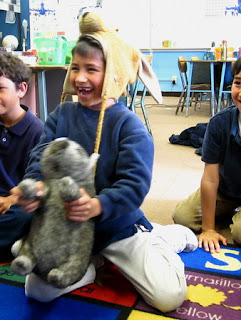 When we started this culinary journey, I decided that I would give myself credit for coutries already cooked. While I could "pull some snags out of the eski and toss them on the barbie for the blokes,"* I opted to take the "been there, cooked that" route for Australia.
*Translation: "...pull some sausages out of the fridge and toss them on the grill for my guys."
Last school year, I taught a six-week elective class - the boys' school calls them SEMs (schoolwide enrichment models) and offers three sessions a year - all about Australia. I've also taught the global history of chocolate, silk painting, and Italian. But that's not relevant to this post. 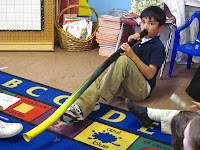 Dylan was thrilled to be able to bring in his stuffed wombat for show-and-tell; Riley learned to play the digeridoo. We studied the animals, the aborigines, the Great Barrier Reef, and on the last class, we had a feast.
We tried VEGEMITE. 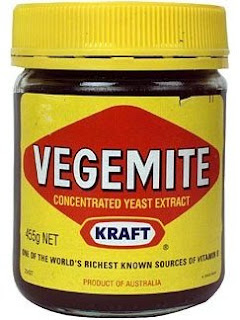 Vegemite is as Australian as kangaroos and boomarangs. I remember the Aussie au pair who was stationed with my family in Rome right before I was had jars of the stuff in her luggage "just in case." It is made from leftover brewers' yeast extract, beer manufacturing by-product as well as a proprietary blend of various vegetable and spice additives. It is a dark ruddy color, almost black and has the consistency of peanut butter. In fact, just like American kids eat peanut butter sandwiches, Aussie kids eat vegemite sandwiches. I was pleased that each of my students gave it a shot, but it is definitely an acquired taste.
And I made PAVLOVAS. 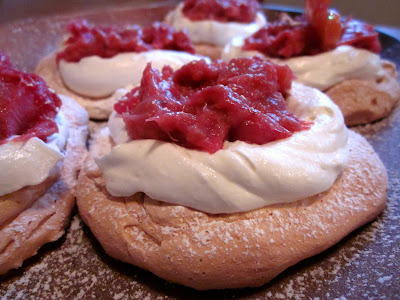 Preheat the oven to 350°F. Combine egg whites, salt, and white vinegar together in a large mixing bowl and beat on high speed until soft peaks form. Combine the 3/4 C sugar and cornstarch together in a small bowl and add to the egg whites in thirds, whisking each addition in completely. Add the vanilla and ground ginger and beat until stiff peaks form. Line a baking sheet with parchment paper and spoon the meringue in 8 big spoonfuls, using a spoon to spread them in a circle, and then make a hollow in each.

So, we're checking one more country off the list on our Cooking Around the World Adventure. Next up: Austria. Stick with me and follow along, or cook some of the recipes for yourself. I'd love to hear how it goes. Email me at constantmotioncamilla at gmail dot com.