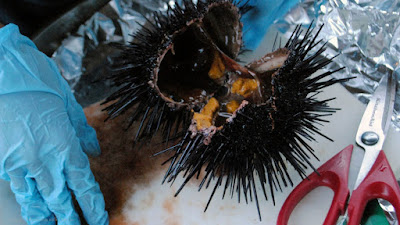 While we were camping in the redwoods last weekend, I brought The Blue Salt Road by Joanne M Harris with me.* 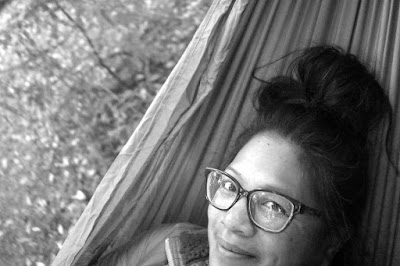 And I read it while relaxing in my hammock one morning before we headed off to the archery range. Selkie stories aren't new to me; I remember reading them in both my Norse Mythology and my British Folklore classes in college. And, when the boys were little, The Song of the Sea* movie was one of our favorites! 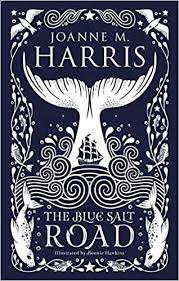 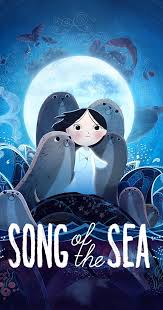 photos from amazon.com
Selkies are 'seal people' who are seals in the water but can come ashore, shed their seal skin and become human. Problems arise when someone steals their seal skin as that traps them in their human form on land. Harris built her story around retelling this premise and has created a novella full of curiosity, passion, young love, confusion, and betrayal.
Flora, a redheaded island girl, summons a selkie from the Grey Seal clan to shore through her tears. Then she seduces him, gets pregnant, and steals his seal skin so that he can't leave her in disgrace. "The red-haired woman smiled at him, and slipped her soft white hand in his. 'You are the son of a chieftain,' she said, 'from the islands of silk and spices. You came here on a merchant ship, carrying wares from your homeland. We met in secret, and we were betrothed without my parents’ knowledge. But now the time has come to reveal our plans, and to celebrate'" (pg. 42).
He marries her. His confusion and dismay are palpable as he struggles to figure out why he doesn't fit in. "'Have some more broth,' said Flora, spooning more of the greasy, warm food into the earthenware bowl by his side. Even the smell of it sickened him, but he was unable to say so in words. He said: 'What kind of broth is this?' Flora smiled, and said, 'Seal, of course. Grey seal, stewed in its own fat. You’ll soon get used to the taste of it. We islanders eat it all the time'" (pg. 43). Flora is as cruel as she is conniving.
Their wedding celebration also featured a plethora of seafood. "Instead, it lasted from low tide to high, then back again to low tide, and began with a dinner of many delicate courses: sour herring; cuttlefish pie; roast seal in a sea-salt crust; fricassee of whalemeat; rock oysters; sea-urchins in their shells, and to finish with, a glorious cake, shaped like a whaling-ship in full sail, with the rigging picked out in white icing and the mast in green angelica" (pg. 58). And when he joins his father-in-law on The Kraken, a whaling ship, he begins to understand what the Island Folk do to the creatures of the sea.
This book was beautifully written and has gorgeous illustrations from Bonnie Helen Hawkins. 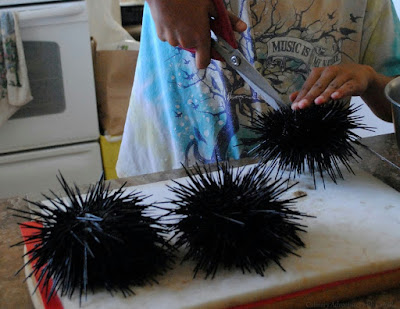 Though not really a foodie book, food plays a major part in conveying his confusion around his identity.  And, as I read, I longed to track down some sea urchin and oysters! "He ate almost nothing at the table, except for a couple of urchins and some oysters which, being raw, did not disgust him as did the cooked food; and though he did not touch the wine, he sat through the meal with aching limbs and a pounding headache" (pg. 59). 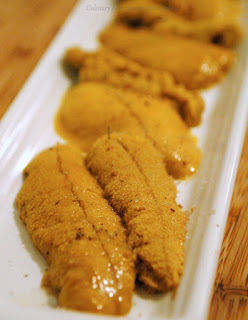 After watching The Hundred Foot Journey several years ago, my Enthusiastic Kitchen Elf was determined to track down fresh sea urchin. Click to read How to Clean Sea Urchin and our Sea Urchin Crostini. 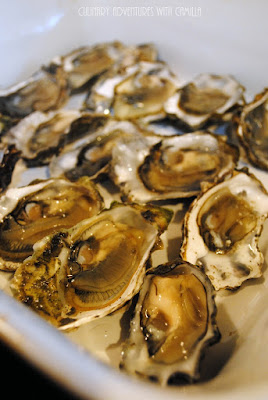 And another uncooked seafood that we have on our table is oysters. Click to read How to Shuck Oysters and a few serving suggestions, including with a Cucumber Mignonette, in a stew (okay, that one is cooked!), and with a Pomegranate Mignonette.
*This blog currently has a partnership with Amazon.com in their affiliate program, which gives me a small percentage of sales if you buy a product through a link on my blog. It doesn't cost you anything more. If you are uncomfortable with this, feel free to go directly to Amazon.com and search for the item of your choice.

Click to see what everyone else read in November 2020: here.