The Bagel Conflict and My Left Coast Bagels 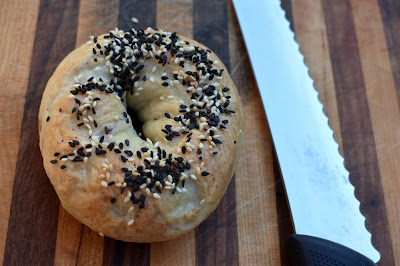 When one of my blogging friends - Sue of Palatable Pastime - posted our #FoodieExtravaganza topic for December, I decided that I needed to try to conquer the bagel and gave myself plenty of practice time. So, I started reading and researching how to make bagels. That landed me on this question: Did you know that bagels were controversial? I didn't. 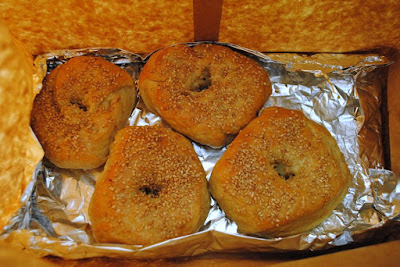 Back in 2017, one of my best friends made bagels and delivered some to my doorstep. My family was thrilled!

That same weekend I received my issue of Food & Wine magazine and there was an article about Montréal bagels. I texted Pia that she was on-trend! And I, clearly, am three years behind the wave. Ha. 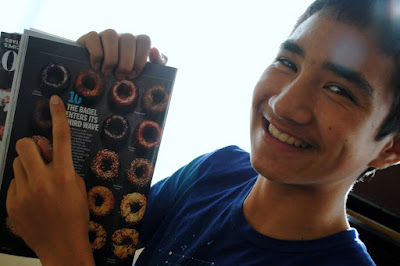 Honestly, I probably still wouldn't have made bagels except that I am always up for a culinary adventure, especially if it's assigned for one of my blogging groups. Thanks, Sue. My family appreciates the nudge! 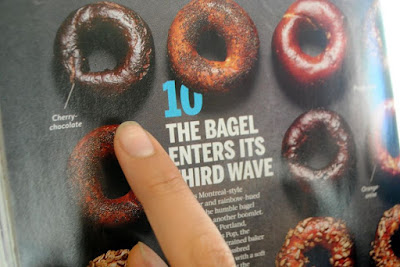 Okay, before I read that article in Food & Wine, I really had no idea that there was a conflict about bagels. New York bagels versus Montréal bagels and, then, the travesty that are bagels in California. I'm serious. There are stories - and very strong opinions - about that. Listen to the podcast from 2015 on KQED: Why You Can't Get a New York Bagel in California. Elizabeth Weil, contributing writer to New York Times Magazine who wrote Why Is It So Hard to Get a Great Bagel in California?
My Left Coast Bagels 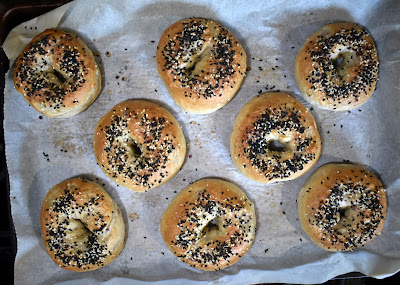 Let's start with some basics...and some comparisons and contrasts. If we use the New York bagel as the standard, the Montréal bagel is thinner, sweeter, and denser, with a larger hole; it is also always baked in a wood-fired oven. Additionally, the Montréal bagel contains malt and egg and is boiled in a honey-sweetened water before being fired. 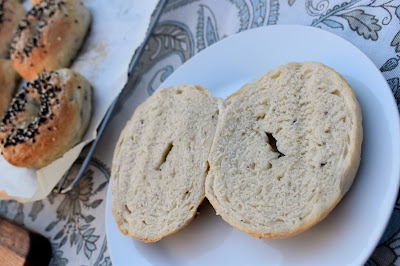 A word popped into my head that I haven't really used since I studied philosophy in college: tautological. Essentially it means that the statement is true in every possible form. What I mean is that you can not have a New York bagel in California. You just can't. You can have a New York-style bagel in California. But a bagel made in California is a California bagel by clear logic.
So I have set out to make a good Left Coast bagel that's dense and toothy. It's not a New York bagel or a Montréal bagel. It's just a bagel made in the classic way...in California: I boiled them in water before baking. I've made these several times with a few variations. I assure you, they are flexible and worth every ounce of effort you put into them. I combined a few different bagel recipes to create this version.
Ingredients makes 8 bagels 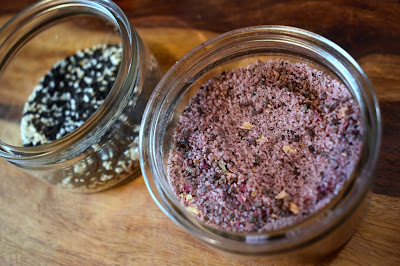 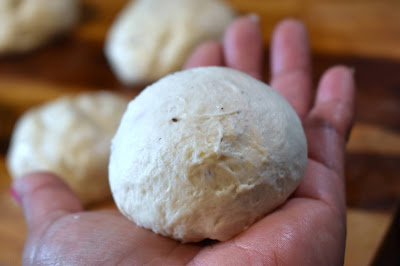 Pour 1/2 cup warm water in a medium mixing bowl. Add in the sugar and the yeast. Let bloom for 5 to 10 minutes.
In a large mixing bowl, whisk together the flour and salt. Form a well in the center and pour in the yeast mixture. Add another 1/2 cup warm water to the well also. Use a wooden spoon to combine to form a stiff dough. You may need another 1/4 water if the dough is too stiff.
Turn the dough out onto a lightly floured countertop. Knead the dough until it is smooth an elastic, approximately 10 minutes.
Oil a large mixing bowl and place the dough inside, rolling it over so that every surface of your ball is covered. Cover the bowl with a damp towel and let rise in a warm place for 1 hour or until the dough has doubled in size. Punch the dough down, then let it rest for another 10 minutes.
After the dough has rested for a second time, divide the dough into 8 pieces. I am not that precise, so they are uneven. But you can weigh them if you wish. 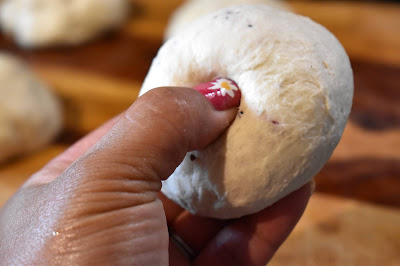 Roll the dough into a ball. Press your thumb into the center of each dough ball to form a ring. Gently stretch the ring to about a third of the diameter of the bagel. Place the bagel on a parchment paper-lined baking sheet. Repeat with all the dough until you have eight bagels. 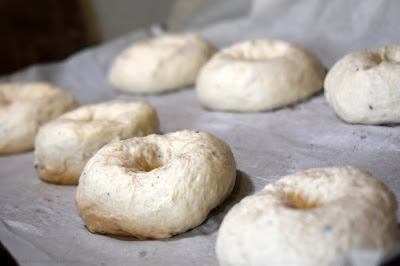 After shaping the dough let them rest while you bring a large pot of water to a boil and preheat your oven to  425 degrees Fahrenheit. 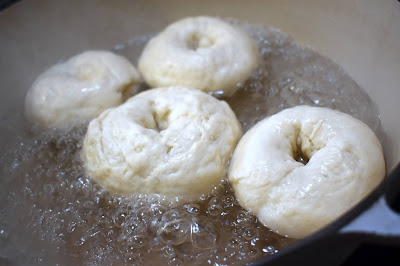 Once the water has come to a rolling boil, lower the bagels into the water. Don't crowd them; I usually do four at a time. Boil the bagels for 2 minutes before flipping them over and boiling them for another 2 minutes. 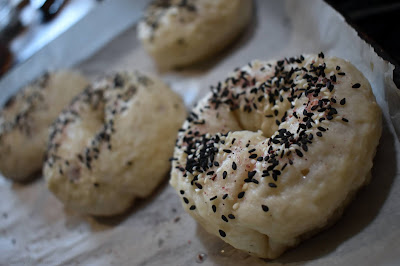 Place them back on the baking sheet and sprinkle them with whatever topping you desire. I used black and white sesame seeds for this batch. Put the tray in the oven until the bagels are golden brown, approximately 20 to 25 minutes.
Cool on a wire rack for 5 to 10 minutes before slicing. Enjoy!