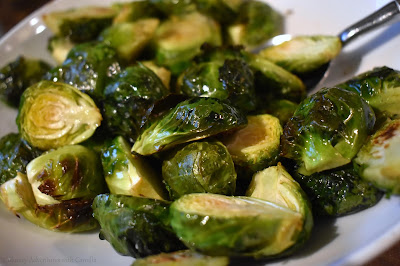 Okay, I really have no idea what a donkey cabbage is. I opted to use the title of the tale to serve roasted Brussels sprouts for our 2020 Thanksgiving Grimm Menu though. This is my usual way to serve Brussels sprouts though this Shaved Brussels Sprouts Salad is also delicious.

"The huntsman winds up in a cabbage patch and realizes he has been tricked. Some of the magic cabbages cause the man to become a donkey while others turn him back into a man. He feeds these cabbages to the maiden and her mother. The mother dies but the huntsman transforms the maiden back into her human form. The two are married."
~Donkey Cabbages
Ingredients serves 8 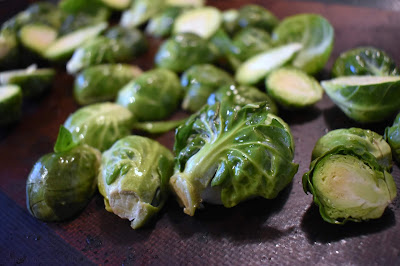 Procedure
Preheat the oven to 400 degrees Fahrenheit. Slice the Brussels sprouts in half, then place them in a mixing bowl. Drizzle them with enough olive oil to coat them and make them glisten. Season with salt and pepper.

Roast for 10 minutes. Move the sprouts around in the pan. Roast for another 10 minutes. When cooked and slightly browned, season with more salt and pepper and drizzle with more oil.

Serve hot or at room temperature.