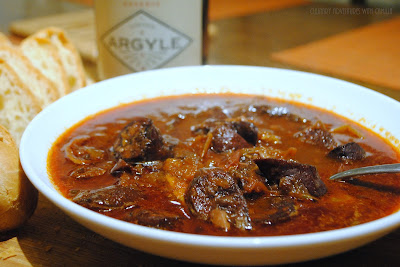 I picked up The Man with No Borders: A Novel by Richard C. Morais* because I really loved his books The Hundred-Foot Journey and Buddhaland Brooklyn.


Although this book is well written, and it's an interesting idea to read about a powerful man facing his own mortality, I found the contradictions of his privileged life to be painful to read. Or maybe it was because he came off as so self-involved. I really thought the book would have been better titled The Man with No Boundaries.
Just a brief synopsis. José María Álvarez faces an unexpected diagnosis of terminal brain cancer. The Spanish-born, Swiss-based private banker races to tie up unresolved business in both his business and personal lives. As Álvarez worsens, he experiences vivid hallucinations and the reader gets a first-person narrative of events from his teenage years. We also see learn secrets that he's hidden from his wife Lisa, who is American, and their three grown sons who fly in from the United States to see their father before he dies.
One benefit of his incredibly privileged, cosmopolitan lifestyle: all the food. I loved reading about his food and drinks, if only to get inspiration for future culinary indulgences.
"She sits catlike before a monstrous Coupe Dänemark, the house-made vanilla ice cream topped with freshly whipped cream and served in a fluted glass goblet with a silver urn of melted chocolate by its side. The stiff and formal woman pours the chocolate over the dessert, and begins eating it, slowly, her eyes suddenly glistening like a drunk’s. It is so obvious this afternoon boul de glace is the highlight of her lonely existence, a widow’s dairy highball in midafternoon."

"Then, toward the end of the meal, I cut myself a wedge of Asturian sheep’s cheese, which I smear over walnut bread and generously dribble with the honey we make on the farm. The salty-sweet flavors dissolve on my tongue, and I close my eyes, travel back to my long-ago childhood, where the Picos de Europa mountain range meets the Bay of Biscay in Northern Spain. I hear the Sella River gurgling at my feet and my uncle’s deep-throated roar as a salmon takes his fly and the reel screams. I can smell the rising sap of the scrubby spruce behind me, and the crackling skin of the suckling pig our cook, Conchata, is spit roasting over an open fire down on the riverbank. The memories, they are heaven."
"When we stopped for lunch we had thirteen salmon on the banks, the smallest of which was four kilos. Drained by the morning’s events, we sat down on the swayback of the riverbank, near the grazing horses, and raided our canvas rucksacks for food. While we were chewing greasy slices of jamón de pata negra, Felipe looked out across the valley, blinked, and said to me, “You fish better than your father and uncle. You feel the fish."
"The smell of Spain is in the air. They haul the stretcher down the jet’s steps. I feel featherlight. Spain fills my lungs and makes me whole again—the smell of rosemary and diesel fuel and hot tar and fried olive oil and of sage baking in the sun. The sky is so blue, bluer than anywhere else in the world. It is a Spanish-tile blue, dotted by rolling clouds that look like meringue. I am in morphine heaven. 'La patria.' “'í, Papá,' says John. 'La patria.' I am my father. Back in my homeland."
On My Table... 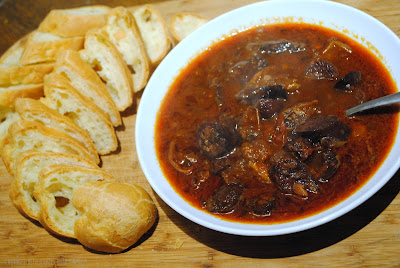 I had chorizo on my mind after reading this, "Ignacio would cut thin pieces of chorizo, place them on a dip in a slab of riverside granite, and then douse the chorizo and stone in aguardiente. He’d set it all alight with his battered brass lighter, until the alcohol was burned off and the oily sausage slices were crispy and sizzling in the dips of the rock."
But, in the end, I was inspired by this passage. "I pour myself a glass of white wine, hum a Basque song about independence, and make my kind of dinner: chorizo simmered in hard cider, and a blood pudding and cabbage dish as sharp and regal as the Spain from where I come. I feel like celebrating life—the life I lived, my way, regrets and all—and I open a fantastic Romeo 'Contador' Rioja 2005, a gift from John, our restaurateur son living in New York." And I decided to make a simple dish of braised chorizo. 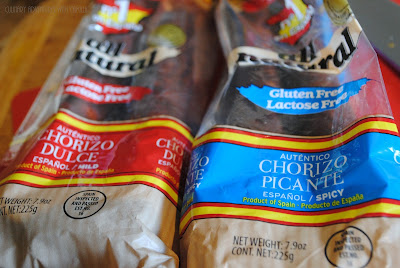 Procedure
In a large, flat-bottom pan, heat olive oil. Add shallots and leeks. Cook until the leeks are softened and beginning to turn translucent. Add the garlic and the apples. Cook for another 2 minutes.

Add the chorizo to the pan and cook until the slices have started to brown. Pour in the tomato sauce and the wine. Stir in the paprika and tuck the bay leaves under the chorizo. Bring to a boil, then reduce the heat to a simmer. 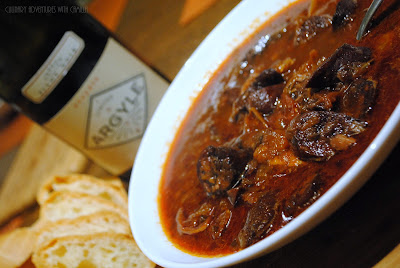 Simmer until you have a thick, rich sauce around the chorizo, approximately 90 minutes. Fold in the fresh parsley. Spoon into a bowl and serve with sliced baguette. 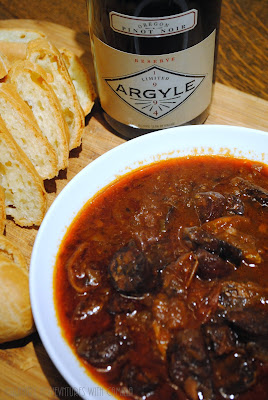 Click to see what everyone else read in November 2020: here.