The Ear of Corn-bread Stuffing #AGrimmThanksgiving 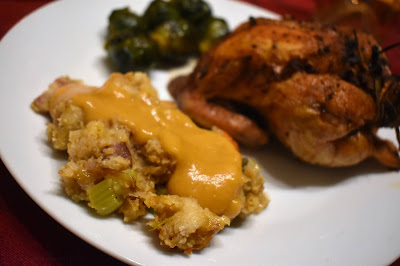 If you're wondering about the 'Ear of Corn' in the title, this was served alongside our roasted Cornish game hens for our Grimm Thanksgiving last week. You can read the rest of the food at my post: A Grimm Menu.

"One day a woman was walking along a grain field, and her little child, who was jumping along beside her, fell into a puddle and got his clothes dirty. The mother tore off a handful of the beautiful ears of grain and cleaned his clothes with them.

The Lord was just then passing by, and when he saw her doing this, he became angry and said, 'From this time forth the grain-stalk shall bear no more ears of grain. Humans are not worthy of this heavenly gift.'

The bystanders who heard this were horrified, fell to their knees, and begged him to leave at least something on the grain-stalk, even if they did not deserve it, at least for the sake of the innocent chickens, who otherwise would starve to death."
~The Ear of Corn 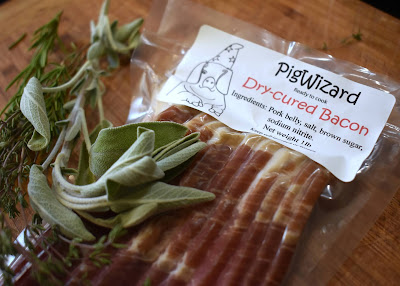 I don't make stuffing (or dressing, depending on where in the country you are from) often, but when I do, I use a recipe I have been using since college...which was probably the last time I actually cooked a traditional menu turkey and all!
This one uses bacon from local-to-me Pig Wizard which is our family favorite! And if you are wondering why I made so much, especially when we had a sheltered-in-place feast, that's a good question. But I did use the leftovers in some Savory Bread Pudding that was delicious.
Ingredients serves 10 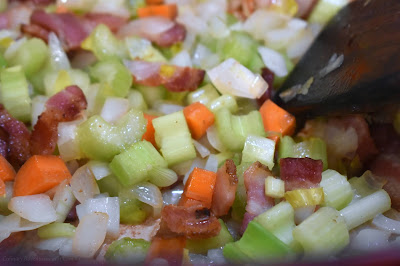 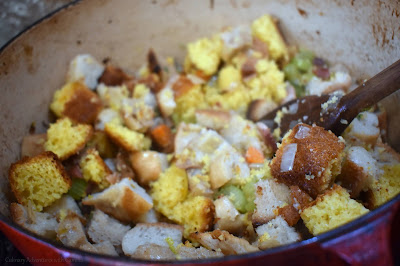 Add diced bacon to a large pot. Cook until fat is rendered, but bacon is not crisped. Stir in the onions, celery, and carrots. Toss to coat them evenly with the bacon fat. Cook until the onions soften and begin to turn translucent, approximately 6 to 8 minutes.
Add in the diced butter and sage. Heat until the butter is melted and the sage is fragrant. Stir in the cubed bread and stir to coat.
Pour in 1/2 cup of stock at a time until the mixture comes together in clumps or how moist you prefer your stuffing. This will depend on how dry your breads are. I used 2-1/2 cups stock total.
Season to taste with salt and pepper. Serve warm.