By Camilla M. Mann November 28, 2020
This is a sponsored post written by me on behalf of Kobrand Wine and Spirits in conjunction with their #TurkeyDayRosé  event. Complimentary wine was provided for this post
though no other compensation was received. This page may contain affiliate links. 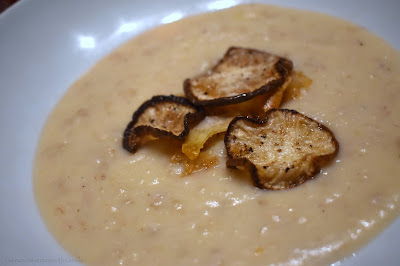 This was part of the second course in my Grimm Thanksgiving menu. You can see the entire line-up here: A Grimm Menu + #TurkeyDayRosé Pairings.
"At length it was so enormous that by itself it filled a whole cart, and two oxen were required to draw it, and the farmer had not the least idea what he was to do with the turnip, or whether it would be a fortune to him or a misfortune. At last he thought, "if you sell it, what will you get for it that is of any importance, and if you eat it yourself, why, the small turnips would do you just as much good. It would be better to take it to the king, and make him a present of it."
~The Turnip
"The hermit, after he had converted the three sinners, lay down to sleep again under the stairs. In the morning, however, they found him dead, and out of the dry wood on which his head lay, three green twigs had grown up on high. Thus the Lord had once more received him into his favour."
~The Three Green Twigs
The Three Green Twigs Salad didn't end up being very photogenic, however, it was just salad greens, a nice vinaigrette, blanched asparagus (twig number one), blanched green beans (twig number two), and cucumber spears (twig number three). So, this post will only include the turnip and potato soup.
The Turnip and Potato Soup
The Three Green Twigs Salad
Louis Jadot 2019 Rosé 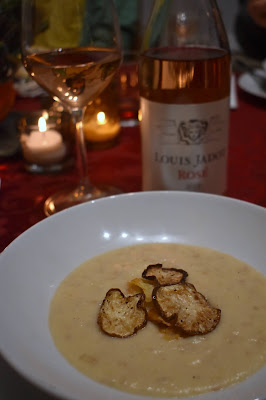 During the Fall and Winter I make a lot of soups. I love that you can just throw everything into a big pot, put it on the stove and you have a filling meal. You can also, as I did for this version, roast the veggies before using them in soup. That brings out some of the sweetness in the root vegetables.
Ingredients 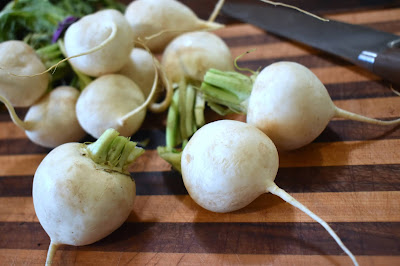 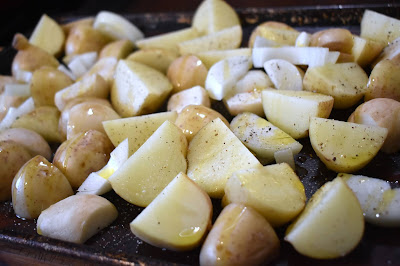 Preheat oven to 425 degrees Fahrenheit. Place turnips, potatoes, and onions on a baking sheet. Drizzle with olive oil. Sprinkle with salt and peppers. Place in the oven and roast for 25 to 30 minutes. 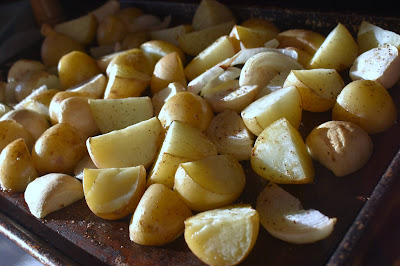 After 30 minutes these won't be completely cooked, but the edges should start to have a golden or brown tinge to them. That color adds delicious flavor to your soup. You can adjust the time on the bake if you want even more color on your root veggies.
While the vegetables are roasting, start on the stove-top part.
Add diced bacon to a large pot. Cook until fat is rendered, but bacon is not crisped. Stir in the onions and garlic. Toss to coat them evenly with the bacon fat. Cook until the onions soften and begin to turn translucent, approximately 6 to 8 minutes.
Remove your tray of veggies from the oven and place them in the pot with the bacon. Toss to coat evenly with the bacon fat. Pour in the chicken stock and bring to a boil. Reduce heat to a simmer and cook until the turnips are easily mashed with a fork.
Remove from heat and let cool for 5 to 10 minutes. Then, in batches, process in a blender until smooth.
Return the pureed soup to the pot and stir in the milk. Heat to warm again, then fold in the herbs. Season to taste with salt and pepper, as needed. 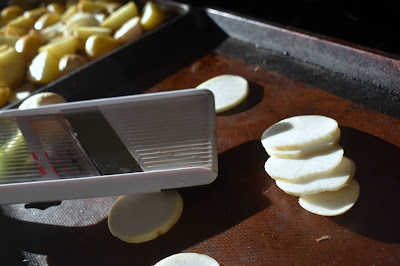 Garnish: Baked Turnip Chips
Preheat oven to 425 degrees Fahrenheit. Place sliced turnips on a baking sheet. Drizzle with olive oil. Sprinkle with salt and pepper. Place in the oven for 22 to 25 minutes. The turnips should be crisped and nicely browned on the skins. Set aside until ready to serve. 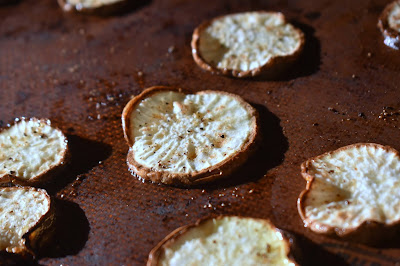 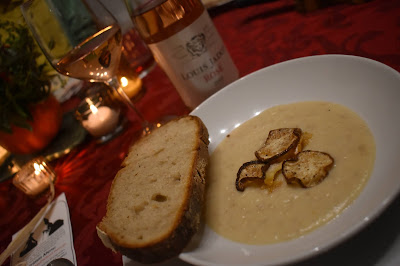 Offer a slice of sourdough bread of the side. Serve immediately.
Louis Jadot 2019 Rosé 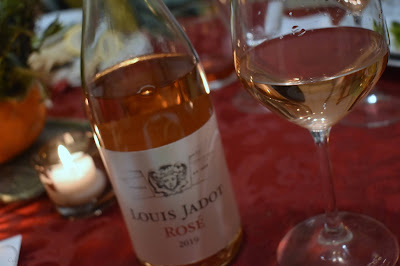 Founded in the mid-nineteenth century by the eponymous Louis Henry Denis Jadot, the Louis Jadot estate has established itself as a reliable producer of both red and white Burgundy wines. This wine, from the Côteaux Bourguignons AOC, is a single varietal wine made of 100% Gamay grapes.
To the eye, this Rosé is a lovely pale salmon color. On the nose it had aromas of light florals and raspberries. However, on the palate, the wine was more tart than I anticipated. Flavors of red currant were pronounced and provided a lively note alongside my creamy, earthy turnip and potato soup. 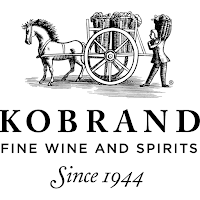 on the web, on Facebook, on Twitter, and Instagram
*Disclosure: I received compensation in the form of wine samples for recipe development and generating social media traction. My opinions do not necessarily reflect the opinions of the organizer and sponsors of this event.