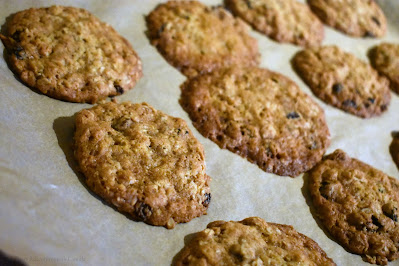 I don't think I realized just how polarizing raisins in cookies were until I made a batch of oatmeal raisin cookies recently and shared photos on social media. Responses ran the gamut from...
I fall somewhere in between there. I wouldn't say they are my favorite - gingerbread holds that honor! - but I don't despise raisins. I did share another recipe that included oatmeal, tea, and chocolate: Warrior Herb Oatmeal Chocolate Chip Cookies. But of the three cookie eaters in my house, these were adored.
Ingredients makes approximately three dozen 2" cookies 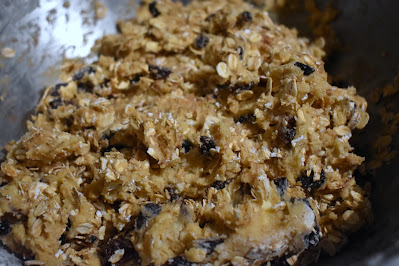 In a large mixing bowl, cream together the butter and sugars. Once that mixture if lightened and fluffy, beat in the eggs one at a time until fully combined. Beat in the vanilla.

In a medium mixing bowl, blend together the flour, baking soda, and cinnamon. Stir the dry ingredients into the butter-sugar mixture. Stir in the oats. Fold in the raisins.

Scoop out the dough by large tablespoonfuls - I use a cookie scoop - onto prepared cookie sheets, leaving at least 2 inches between each cookie. These flatten out and spread as they bake.

Place trays in the oven and bake until the edges of the cookies turn golden brown, approximately 16 to 18  minutes.

Let the cookies cool for 3 to 4 minutes on the sheets. Then carefully transfer them to a wire rack to cool completely. Store tightly covered.