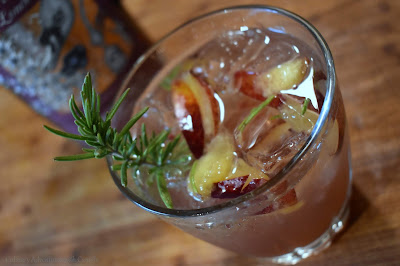 Here we are at day two of the #StoneFruit blogging party, hosted by Heather of Hezzi-D's Books and Cooks. Yesterday the stone fruit celebration covered cherries, peaches, plums, and even a mango. I guess I never thought about a mango as a 'stone fruit', but it does have a stone in it, right?!? Today, the group presents... 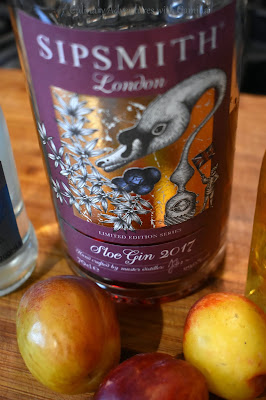 I had heard about sloe gin years ago during a live chat in one of my wine blogging circles. But I never found any until I was walking through London's Heathrow airport on my way back from Denmark after the new year. I immediately scooped up a bottle; I probably would have purchased two, but my husband already had some alcohol in his carry-on.


Sloe gin is a red distilled alcohol made with gin and sloe (blackthorn) drupes, which are a small fruit related to the plum. I was never a gin fan until I covered a cocktail event at a local hotel years ago. After that, I was sold.


I appreciated the historical background of gin as a cure-all. Gin was invented in the 17th century by a physician in the Netherlands who started with neutral grain spirits and flavored them with the juniper oil. He used it to treat kidney ailments and called it 'genever' which, in Dutch, means juniper.

The British incorporated the juniper-infused alcohol into their regimen to battle malaria and scurvy. While effective at inhibiting malaria-causing parasites, quinine – made from the bark of the cinchona tree – has a bitter, unpleasant taste. Diluting quinine with water and sweetening it with sugar formed a ‘tonic water.’ The British East India Company and its colonials in India, then, added gin to the tonic to make it even more palatable. Voilà! The Gin & Tonic was born.

While I love a good G&T, I also enjoy seasonal variations. So, for the #StoneFruit event, I decided to make a version with some muddled plums that the Enthusiastic Kitchen Elf and I picked at a local farm. You can read about our Plum Picking adventure in my first post for this event! 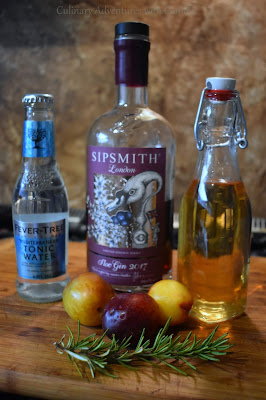 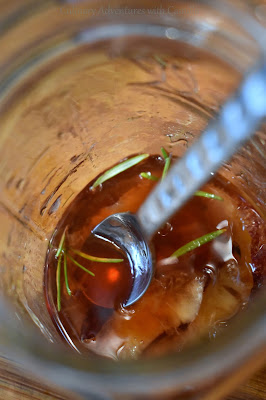 In a cocktail shaker or mason jar, combine the plum chunks and a few rosemary leaves (keep the sprig mostly intact for garnish) with a splash of soda water or tonic. Muddle until you begin to smell the rosemary; I just use a spoon and press the fruit and herbs against the side a few times.

Add several ice cubes, sloe gin, and elderflower liqueur to the shaker or jar. Shake or stir vigorously with the top on. Add ice cubes to a serving glass, then pour the shaken mixture in. Top off the glass with more tonic or soda water. Garnish rosemary sprig and serve immediately.