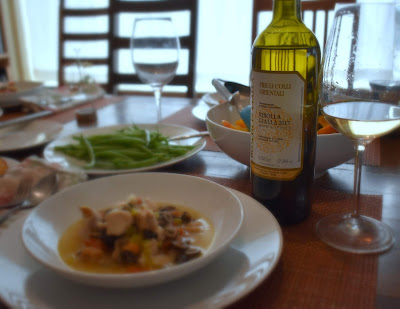 Kevin of SnarkyWine is hosting the #ItalianFWT bloggers as we focus on the Whites of Northeastern Italy. Read his invitation here.


If you are reading this early enough, hop over to Twitter on Saturday, August 3rd at 8am Pacific time and join a live chat. Search for hashtag #ItalianFWT to read the comments and chime in. Then find inspiration and make discoveries with some of the #ItalianFWT writers this month... 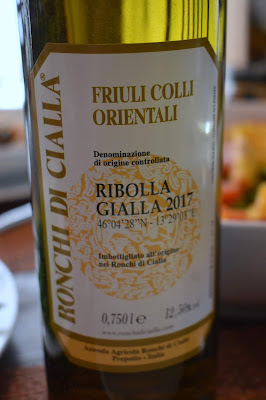 The Colli Orientali del Friuli is a Denominazione di Origine Controllata (DOC) located within the Italian wine region of Friuli-Venezia Giulia and it has been thriving grape-growing region since the Roman era. Known primarily for its white wines, I was excited to get my hands on a single varietal indigenous grape: Ribolla Gialla. Okay, I'll also admit that I love saying the name of that grape. It's so melodic. Ribolla Gialla. Ree-boh-lah jahl-lah.

Ribolla Gialla is an ancient white varietal from northern Italy and bordering Slovenia. Rarely seen elsewhere, the wines are typically light in body with bright acid and floral aromas. And this one - Ronchi di Cialla Ribolla Gialla 2017 - is a prime example of those characteristics.

And I appreciate that this estate, Ronchi di Cialla which was founded in the early 1970s, has been determined to work with indigenous varieties and use natural methods for parasite and fungus control since its inception. Pierpaolo and Ivan, the second generation of Rapuzzi, have been working with Ribolla, Refosco, Schioppettino, Verduzzo and Picolit while Schioppettino was almost single-handedly saved from extinction by Ronchi di Cialla. 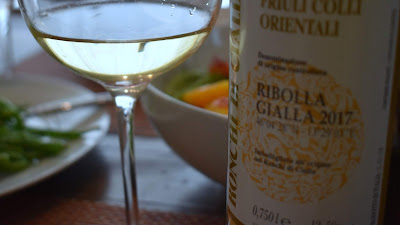 This was very classic example of Ribolla Gialla. With its fruity nose and pronounced minerality on the palate, there were many things with which I could imagine the wine pairing. I first thought about a Venetian seafood stew, then I moved to a heap of thinly shaved Parma. But, in the end, I wanted to make something with rabbit that I had in my fridge. 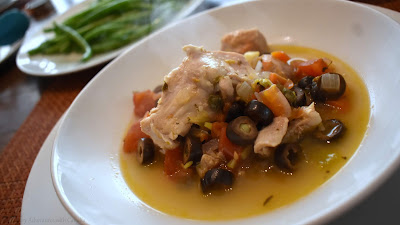 So, I went to the other end of the country and created a sweet and sour rabbit that is more typical of Sicilian flavors. I think it paired well with the wine. 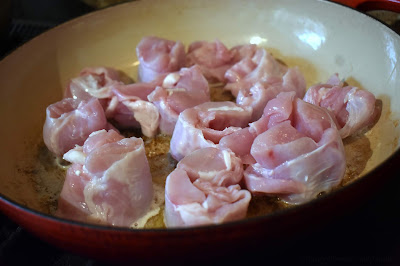 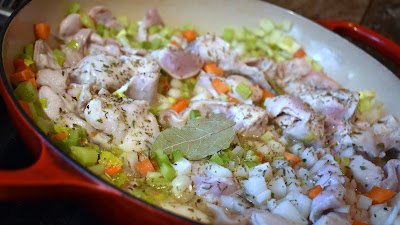 In a large rimmed pan (my braiser is the perfect vessel), heat 2 T olive oil over medium heat. Add in the rabbit pieces and brown them for approximately 2 to 3 minutes per side. Season liberally with salt and pepper. Remove meat from the pan. Add in another 2 T olive oil and add the onions, carrots, and celery. Cook until the onions soften a bit, approximately 5 minutes, and nestle the rabbit into the pan. Stir in the oregano and add the bay leaves.

In a small sauce pan, whisk together the sugar, vinegar, and water. Heat until the sugar is dissolved, then pour the mixture over the rabbit. Bring to a boil. Reduce the heat to a simmer and cover. Cook for 30 minutes. Add in the diced tomatoes and olives. Cover again and simmer for another 30 minutes. During the last 5 minutes, uncover the pan and turn up the heat to reduce the cooking liquid slightly. 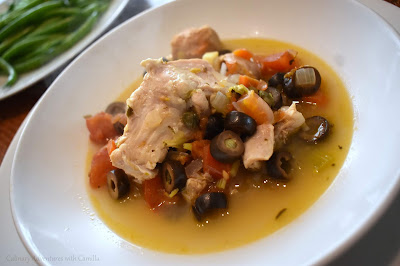 Coniglio in Agrodolce can be served hot, immediately, or you can let sit for a few hours for the flavors to mingle. I did the latter and it was a great summer evening dish. 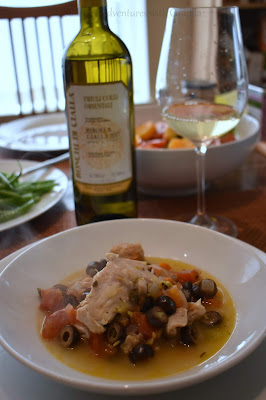 Next month the Italian Food Wine Travel bloggers will be sharing recipes and pairings with Passito wines with Katarina of Grapevine Adventures leading the charge. I can't wait to explore that topic. Stay tuned.