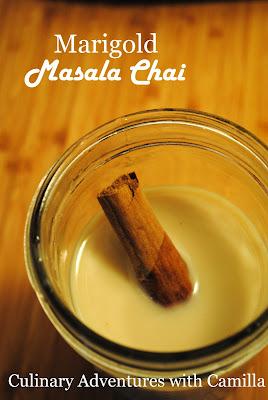 Heather from girlichef is hosting Food'N'Flix this month. And her pick - Monsoon Wedding - is one I hadn't seen, so I was excited to watch something new-to-me. Click here to see Heather's invitation to her movie selection.

So, one night, while I was waiting for some dough to rise and all three of the testosterone monsters were sleeping soundly, I watched it. 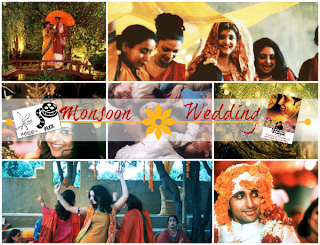 The film, artfully, mirrors the chaos that is planning a wedding...during monsoon season, no less. Add to that an odd mix of traditions and modernity; three languages - English, Hindi, and Punjabi; and guests from three continents. Then picture that the bride hails from Delhi and the groom has just flown in from Texas; theirs is an arranged union. Oh, and the bride is still involved with her already-married older lover. Yep, you're getting the idea now. Mayhem and chaos abound that can only lead to one thing: entertainment! Wet, messy entertainment.

There are moments of real drama. But I'll let you watch it on your own to get the skinny on that. I'll just say one more thing before I launch into what I made for Food'N'Flix - the colors are vibrant, saturated, and gorgeous. Oranges, green, red. It's a feast for the eyes.

Food and drink don't feature too prominently in the film. You do see someone frying Muruku in a large kettle of oil. I wondered what traditional sweet morsel the bride and groom fed each other right after they exchanged rings. There are market scenes with exotic fruits in piles and bins. The bride and groom stroll while eating popsicles that reminded me of 50-50 popsicles, though they were probably not cream-filled in the movie. And the guests, during the multi-day celebrations, drink everything from whiskey to rum. But the 'edible' that stuck out in my mind were marigolds. 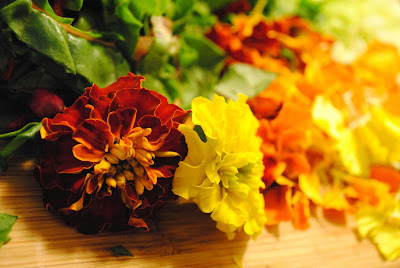 Marigolds hang from the wedding trellis and from the groom's headdress. The wedding planner presents the maid with a heart made of the golden blooms. (Whoops, that was a spoiler.) And characters, throughout, mindlessly munch on these gorgeous, spicy blooms. [Side note, I recently did a cookbook review of Cooking with Flowers, so you can click to see a few recipes that include marigolds. I made a marigold carrot cake and a marigold frittata.] 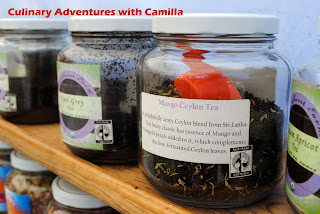 When I went to one of the farmers' markets this weekend, I spent some time in the loose leaf tea booth with my 9-year-old. Serendipitously, he had selected a marigold tea. So, after I watched the movie, I decided to make a Marigold Masala Chai. The bride and groom drink chai - unsweetened! - during a pivotal conversation that almost derails the whole affair. 'Masala' means 'a blend of spices', and 'chai' simply means 'tea.' So, Masala Chai is literally 'spiced tea.' 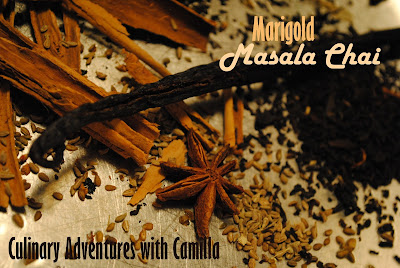 Pour tea through a fine-mesh sieve. Or use a coffee press. Pour into serving glasses. Garnish with a cinnamon stick. 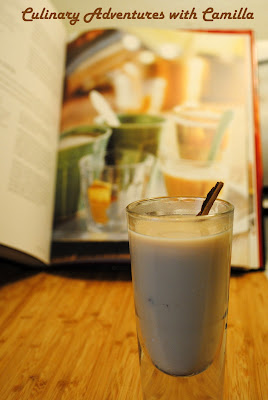 If you want to join the fun, you still have time.
Submissions are due to Heather by July 28th.

And next month, Caroline Makes is hosting. We'll be watching, or re-watching as the case may be, When Harry Met Sally. Hope you'll join the fun.