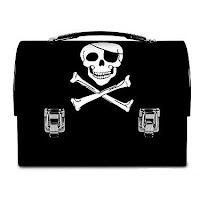 But wraps...last year they tried wraps - tortilla wraps, lettuce wraps...wraps are still kid-approved. Any other healthy suggestions? I'm all ears.