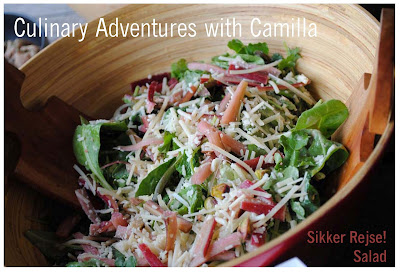 Sikker Rejse!  is the Danish equavalent of 'Bon Voyage!'...at least I hope it is, seeing as I don't speak Danish. At least that's what Google Translate told me.

In any case, I signed up to bring green salads to a potluck this weekend. Since I had a couple of extra stalks of rhubarb from the rhubarb crostata - recipe coming, I promise! - I decided to feature those tangy, ruby stalks in a salad. This made 2 large salad bowls full...

Toss all of the ingredients in a mixing bowl with a salad dressing of your choosing. I made a pinot grigio vinegar dressing with fresh thyme.

One friend said, jokingly, "What a waste of rhubarb! You should have made another tart." I didn't have quite that much rhubarb. Both bowls were empty at the end of the party. So, someone - or many someones - liked it.