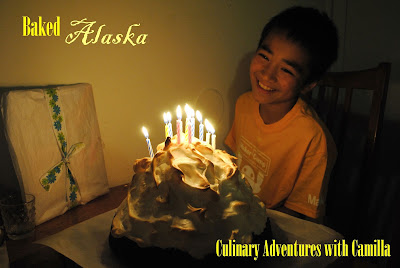 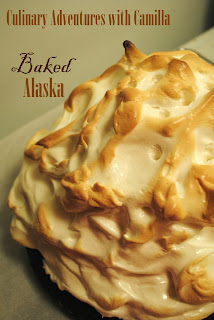 "I want a Baked Alaska for my birthday cake. Well, not a cake. But you know what I mean, right?" declared my almost eleven-year-old when we were discussing what to bring for his birthday party picnic.

Riley, I can't bring a Baked Alaska to the Pinnacles. It's an hour and a half away; and there's no oven though, during the summer, it often feels like an oven. Remind me again why we're hauling five families and an entire lunch over there for a party?!?

Our compromise: I brought rhubarb pies to the birthday picnic and promised to make him a Baked Alaska for his real birthday 'cake.'

I took Riley with me to the store - to pick his ice cream flavor(s) - and  he immediately honed in on 'Moose Tracks' ice cream. Never heard of it? Me neither. But he was set on it. He selected a vanilla version and a mint version with ribbons of fudge and chunks of chocolate. Not quite sure what the 'tracks' are - poop?!? - but he loved that it fit his theme.

Ice Cream...
Let the ice cream soften, slightly, so that you can scoop it and press it into your mold/bowl. Select a bowl that leaves at least 1" of a border between it and the size of the cake. 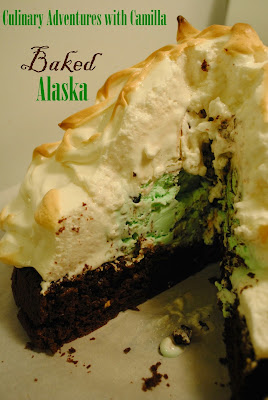 Add milk, oil, eggs, and vanilla to flour mixture and mix together until well combined. Carefully whisk in boiling water and beat on high speed for about 1 minute to aerate the batter.

Pour the cake batter in to the buttered dish and bake until a toothpick inserted in the center comes out clean. Mine - because my pan was deep - took 80 minutes. If I had split the batter into two dishes, it probably would have taken half the time.

Remove from the oven and allow to cool for 10 minutes. Run a knife around the end of the pan and invert the cake onto a wire cooling rack.

Once you're all set to assemble, separate 8 eggs, placing the whites in a large stainless steel bowl. Add 1/8 t cream of tartar, 1/8 t salt, and 2 T organic granulated sugar.

Beat egg whites with cream of tartar, salt and sugar until stiff peaks form. Line a baking sheet with parchment or heavy brown paper. Place cake in center. Turn molded ice cream out onto cake. Quickly and prettily spread meringue over cake - make sure to have lots of little peaks because that is what browns. Return to the freezer.

Preheat oven to 425 degrees F. Bake the Alaska on the lowest shelf, 8 to 10 minutes, or until meringue is lightly browned. Serve immediately! 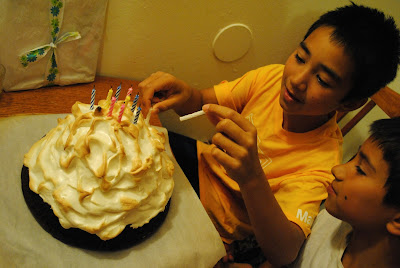