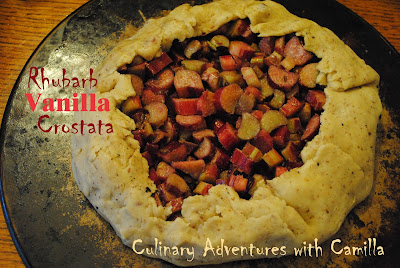 I signed up to bring a rhubarb crostata to a 'See-You-Later' Party, but after three different stores, I still didn't have any rhubarb. One of my friends - a rhubarb fanatic - was distraught when I told him I was changing my dish and actually called around to locate some for me.

"Whole Foods," he announced triumphantly. So I high-tailed it over there and picked up a bunch of stalks to make this send-off treat.

In a large mixing bowl, toss together the rhubarb, vanilla, sugar, flour, and butter. Preheat the oven to 425. 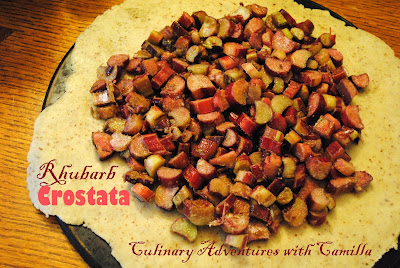 Roll the chilled Pâte Brisée out between 2 sheets of parchment paper and lay it on your baking stone (or sheet). Spoon the mixture into the center of your crust, leaving about 2" on all sides.

Gently fold the crust up to create a free-form tart. Sprinkle with granulated honey and bake for 45-50 minutes - until the crust is firm and lightly golden. Let cool slightly. Serve warm.