By Camilla M. Mann June 16, 2013
Almost all of the time, my posts are about things that I - or my boys - have cooked. Sometimes, though, I want to share something that I've eaten. And tonight is one of those times.

We had dinner at a new Mediterranean eatery to celebrate Fathers' Day with my parents. When I saw arancini on the menu, I had to order some for the table. I probably will never make these, as I don't like to fry things, but I wanted share them because they are one of my favorite snacks. 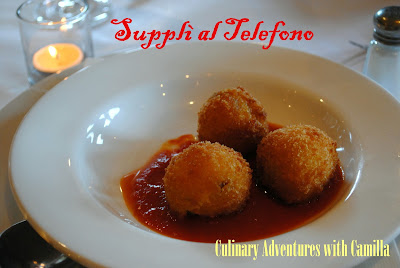 I used to order supplì -  deep fried rice balls, stuffed with meat and cheese - all the time when I lived in Rome. They're delicious and easy to eat while on the go...and I was always on the go. Not much has changed in that regard.

Arancini, what these are called in Sicily, and on the menu at The Market are called that because they resemble oranges. In Rome, they are called Supplì al Telefono, literally supplì 'to the phone.' Odd name, until you think back to the days when phones had cords. Yes, younguns, phones used to have cords! Inside the supplì are molten bits of mozzarella cheese; when you bite into them and pull away, the melted cheese is long and stringy, resembling a telephone cord. 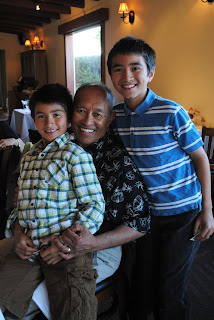 Here's a recipe I found for them from Giallo Zafferano: Supplì al Telefono. It's written in Italian, but your browser should give you the option to translate it. You can also check out a version at Manu's Menu. And one more version - from the Food Network. Che squisito!