Gamay Around the Globe: From Burgundy to the Willamette Valley + Mussels, Pici, and A Bottle from New Zealand #Winophiles 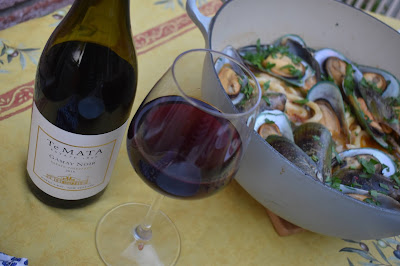 This month I am hosting the French Winophiles as we look at French grape varieties that are cultivated and made into wines around the world. You can read my invitation here, but I asked the group to get  creative and look, for example, at Cinsault but made in Chile; Semillon from Australia; or Négrette made in California.

If you are reading this early enough, feel free to join our live Twitter chat on Saturday, March 20th at 8am Pacific time. Follow the hashtag #Winophiles and be sure to add that to anything you tweet so we can see it. Here's what the group is sharing...
Gamay Around the Globe 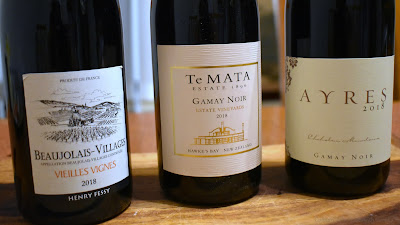 As for me, I decided to explore the same French grape - Gamay. Same vintage - 2018. But different countries. So, I picked up three different bottles of Gamay all from 2018. One from Burgundy, one from Oregon, and one from Hawke's Bay, New Zealand.
Tarte à la Tomate + Henry Fessy Beaujolais-Villages Vieilles Vignes 2018 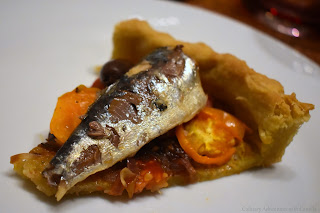 You can go to my original recipe post for the Tarte à la Tomate. But, for this pairing, I poured the Henry Fessy Beaujolais-Villages Vieilles Vignes 2018 from Beaujolais, Burgundy, France.
In the late 19th century, Jean Pelissier acquired a piece of land in the heart of the Brouilly appellation. And along with his son-in-law, Henry Fessy, they set out to create wine with little intervention to ensure the wines fully expressed the grapes' terroir and unique sense of place. Moving into the 20th century, the legacy has passed to sons and grandsons. And the estate was purchased in 2008 by Maison Louis Latour.
In the glass, the Henry Fessy Beaujolais-Villages Vieilles Vignes 2018 poured a deep ruby color with flecks of purple on the rim. On the nose, the wine had ample red fruit which were mirrored on the tongue. The finish was spicy and it made for a nice parallel to my somewhat piquant tomato tart.
Spiced Sweet Potato-Red Lentil Stew +
Ayres Gamay Noir 2018 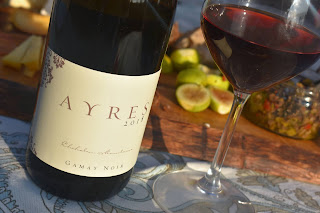 After tasting a French Gamay with my take on a French tomato tart, I was inspired to pair an Oregonian Gamay with my take on a stew from Sudan. I know, I know, those don't even sound like they are in the same flavor universe, but it worked. I promise. You can go to my original recipe post for the Spiced Sweet Potato-Red Lentil Stew.
The 2018 Ayres Gamay Noir comes from the Chehalem Mountains in Oregon's Willamette Valley. In 2000 Brad and Kathleen McLeroy partnered with Kathleen's parents, Don and Carol McClure, to purchase a property in Newberg that would become the  Ayres Vineyard. The first vines were planted in 2001. And the Ayres Vineyard is committed to sustainable growing practices and has held both LIVE and Salmon Safe certification status for a decade now.
McLeroy crafts his wines to retain the soil's voice in his grapes. To that end, the grapes are harvested by hand and lightly crushed in a wooden basket press before undergoing native fermentation.
This Gamay had all of the red fruit that I think of as typically Gamay.  However, it had a lively, present earthiness from its spiciness to its evergreen duff. That damp woodiness went well with my peanut-based sweet potato stew.
Mussels and Pici +
Te Mata Estate Vineyards Gamay Noir 2018 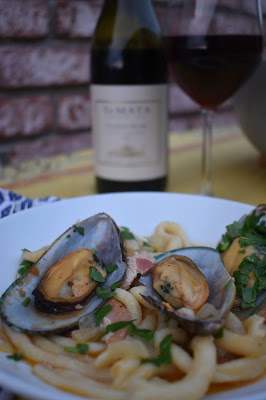 However the recipe that I wanted to highlight for this event is sort of off the deep end in two senses. First, it feels about as far from France as you can get; and second, it's a red wine paired with seafood. But I have never really been much of a rule follower with my wine pairings, as in 'seafood goes with white wine' kinda rules. So, here we go.
In My Glass
The Te Mata Estate Vineyards Gamay Noir 2018 hails from Hawkes Bay, New Zealand. The estate was originally part of the Te Mata Station and lies in the shadow of The Sleeping Giant. I love the teleologial legend of how that peak came to be.
Legend has it that Hinerakau, the daughter of a Pakipaki chief whose people lived inland, plotted to make Te Mata, a Waimarama chief whose people ruled the coast, fall in love with her. She hoped to bring peace to the land from coast to mountain. But her scheme backfired when she actually fell in love with him, too. Her people demanded Te Mata prove his devotion by performing seemingly unachievable tasks. He died proving his devotion while biting his way through the hills to create an easy access between the coast and the plains. Choking on the dirt of the hills, it's his body that forms Te Mata Peak. And, they say, that the gully at the bottom of the cliff was formed when grief-stricken Hinerakau threw herself off the mountain in anguish. 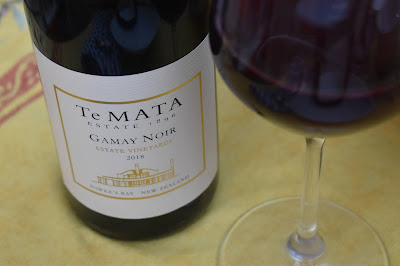 In the  glass, this wine is a vibrant, deep ruby hue with a brighter red on the rim. While there's an abundance of fruit - both red and black - on the nose, the palate is more earthy and mineral than the aromas suggest. I enjoyed the notes of licorice and spice on the tongue. And the wine's silkiness was tempered with some zesty tannins. This was a fun wine and I wanted an equally fun food pairing.
In My Bowl 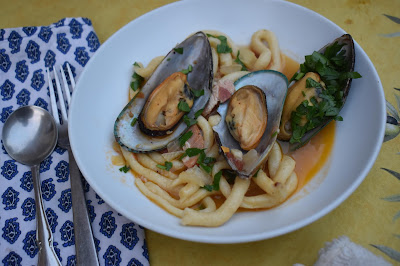 When I was searching for recipes from New Zealand, I came across a dish made popular by a  Malaysian chef that he called Mussels and Pici. So, it's not a traditional New Zealand dish, but I do love making hand-rolled pasta and I found some mussels from New Zealand. 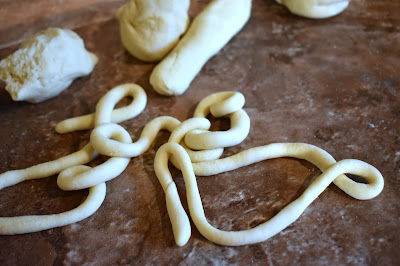 Pici is thick, hand-rolled pasta that originated in Tuscany, near Sienna. It's usually made from just flour and water so it's a little more dense and chewy. And, as with most of my pasta doughs, I use weight measurements but have given volume approximations as well.
Ingredients serves 4 to 6 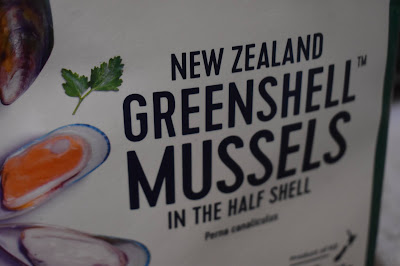 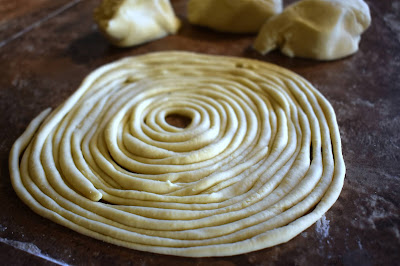 Pici
Place flours and salt together in a mixing bowl. Gradually add the water, and mix with a fork until it just comes together. 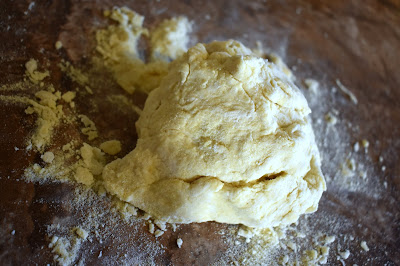 Turn it out onto a lightly floured surface and knead for 8-10 minutes until smooth and elastic. 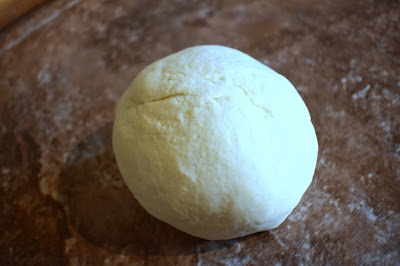 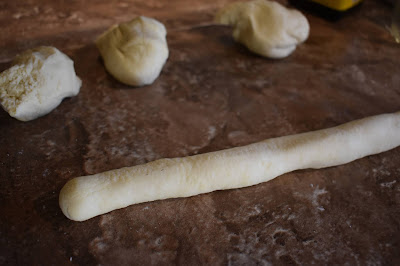 Divide the dough ball into 8 golf ball-sized pieces and roll them into 12" cylinders approximately 1" diameter. 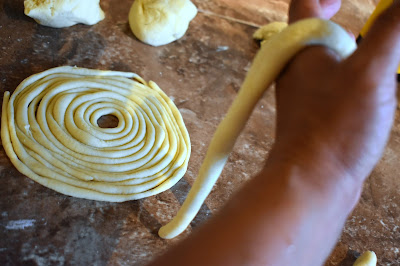 Then take each cylinder and rub them between your palms until they elongate and become thinner. I like to use gravity and have the pici come off the back of my hand back to the countertop. 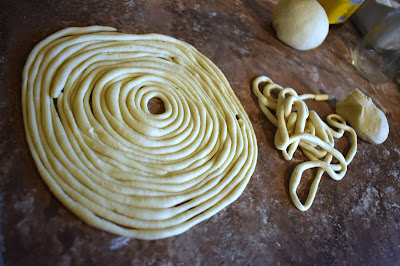 Curl the noodle into a spiral. Set aside until needed. 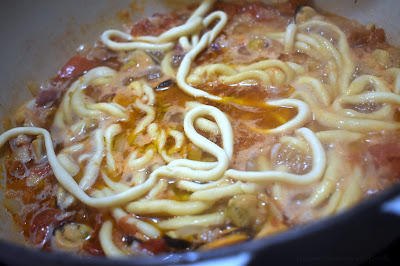 Mussels
Heat the oil in a large pot over medium heat. Add the garlic and onions and cook until just slightly softened, approximately 3 to 4 minutes. Pour in the wine and stock. Stir in the tomatoes, saffron threads, and saffron soaking water. Bring to a boil.
Add the pici to the pot. Cook for 3 to 4 minutes. Nestle the mussels into the cooking liquid. Cover the pot and let the mussels steam for 3 to 4 minutes. If they are in their full shell, make sure you steam them until they open.
Once the mussels are  cooked through and opened completely, scatter  fresh parsley over the top and season with freshly ground black pepper. Spoon servings into individual bowls and serve immediately. 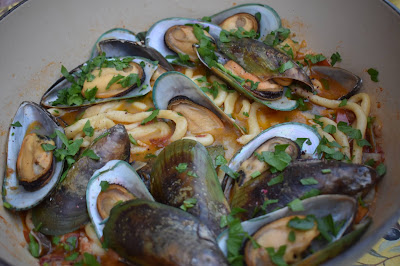 That's a wrap for our French grapes outside of France focus. We'll be back next month as Gwendolyn of Wine Predator leads the discussion about organic wines from the Loire. Read her invitation: here. Stay tuned.