A Prelude to a Tryst: Pasta Con Le Sarde #FoodNFlix 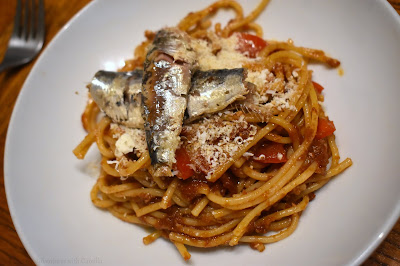 This month, for Food'N'Flix, Amy of Amy's Cooking Adventures is hosting Food'N'Flix a month after our online book group Lit Happens read the book on which the movie is based: P.S. I Love You*. You can read her invitation here.
I enjoyed P. S. I Love You, the book, but I'm going to say something that I rarely say: I vastly preferred the movie.
There are marked differences between the book and the movie that almost make it a completely different story! For starters, movie Holly was much more likeable than book Holly.
A Rom-Com with a Twist 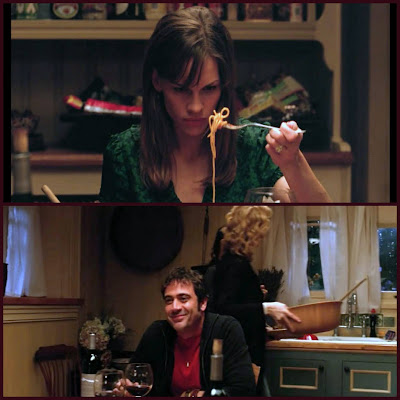 P.S. I Love You is a rom-com with a twist, namely that the love story involves a woman, Holly, and her now deceased husband, Gerry. The movie opens with a marital spat between Holly, played by Hilary Swank, and Gerry, played by Gerard Butler, as they bicker about something he said to her mother at dinner.

Gerry : I'm sorry I said the wrong thing to your mother. God, I still get nervous around her. I still think, after nine years, she doesn't like me. I know I'm being stupid.
Holly: No, you're not being stupid, baby. She doesn't like you.
Gerry: Really? I kinda thought, deep down, she really loved me.
Holly: No... she doesn't. I was nineteen when we got married. You corrupted me with sex and charm, and the longer it takes you to make your fortune, the less sexy and charming you are.

Cut forward and the next scene is at a wake...for Gerry. At 29-years-old, Holly has lost her husband to a brain tumor. On her 30th birthday, Holly receives the first letter in a series from Gerry that he wrote before he died.

Each letter, one delivered every month, is intended to shake her out of her grief, to get her out of their apartment, and to start living again. The letter and instructions run to gamut from boxing up his clothes to singing karaoke and even taking a trip to Ireland with her friends; and for that last one, he made all the arrangements with a travel agent before he passed. And throughout all of those, we get flashbacks as to why those things are important to him...and her.

In the movie we see her forging a friendship with Daniel, played by Harry Connick, Jr., who works at her mom's bar. Daniel is interested in something more with Holly, but she keeps him at arm's length. And, when she travels to Ireland with her friends, she meets William. Turns out that William was in Gerry's band way back when. But she doesn't discover this until after they have tumbled into bed. Sorry for the spoiler on that one. Besides that fact that Jeffrey Dean Morgan, who plays William, is adorable, it's definitely one of my favorite scenes.

William has rescued the gals from the middle of a lake after they lost their oars during their fishing excursion. So, they take him back to their rented house and Sharon cooks him dinner though Denise says she helped. Then the friends make themselves scarce after dinner and Holly and William are left alone with a bottle of Jameson.

That's all I'm going to write about this other than that it's a fun movie and definitely worth two hours of your life, I'd say. I can only imagine the difficulty in losing a spouse, but Holly moves on and you feel as if she's honoring Gerry's wishes and memories in a respectful way. 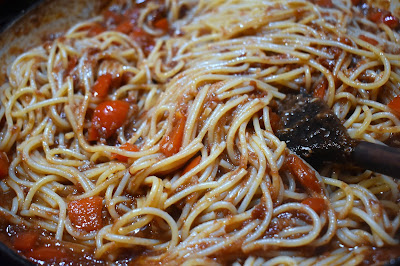 So, I was inspired by that scene in Ireland that I mentioned already: the pasta dinner after William  rescues the ladies from the lake. I opted to make a Pasta con le Sarde since they were on a fishing expedition that afternoon! I make this often and love that the canned sardines make this otherwise plain pasta a complete and tasty dinner.
Ingredients serves 4 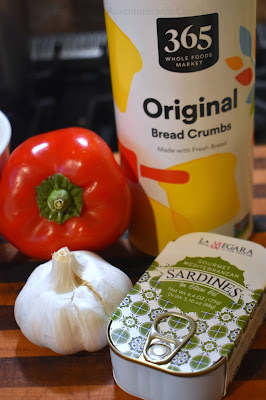 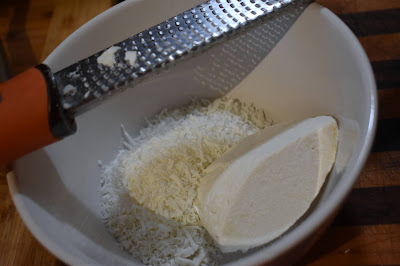 In a large skillet, toast the breadcrumbs until they are golden brown. Set aside. Once they are cool, stir in the grated cheese. Set aside until you are serving the pasta.
In a large, flat-bottom pan, heat olive oil and sauté the peppers until they are softened and beginning to caramelize. Stir in the anchovy fillets, tomatoes, saffron, and saffron-soaking water. Bring to a boil, then reduce heat to a simmer. Cook till the tomatoes are completely broken down and a thick sauce has formed. In the meantime, cook your pasta according to the package instructions.

Once the pasta is cooked and the sauce is done, toss the pasta into the sauce with a splash of olive oil to make it glossy. To serve, place pasta in individual serving bowls, top with a sprinkle of breadcrumb-cheese mixture. Grind salt and pepper over the top. Add the sardines and serve immediately.
That's a wrap for me on P.S. I Love You. The #FoodNFlix group will be back next month with Peter Rabbit hosted by Literature and Limes. I don't think I've ever seen that movie. But I think it's timely with Easter coming up...and I foresee lots of carrot recipes from the group. Maybe.
*This blog currently has a partnership with Amazon.com in their affiliate program, which gives me a small percentage of sales if you buy a product through a link on my blog. It doesn't cost you anything more. If you are uncomfortable with this, feel free to go directly to Amazon.com and search for the item of your choice.