Eating from a Pølsevogn + The Copenhagen Affair #FoodieReads 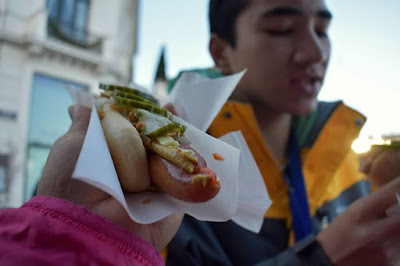 This weekend I picked up The Copenhagen Affair by Amulya Malladi* even though I didn't really care for the other book I read by the same author - Serving Crazy with Curry*. I must have been feeling nostalgic for our friends in Denmark as well as missing the adventure of actually traveling. I still can't  believe that we've been on shelter-in-place order for a year. Though those restrictions are slowly lifting as more and more people are able to be vaccinated. 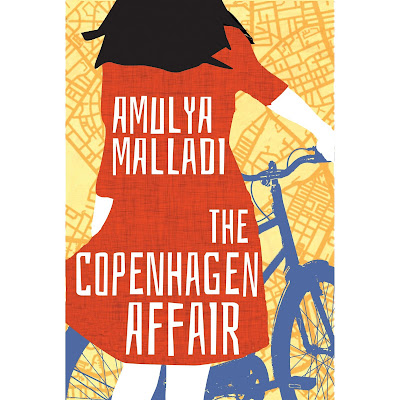 Malladi describes this book as her love letter to Copenhagen, her favorite city in the world and one in which she lived for over a decade. You can tell. And I think that was a huge part of the appeal in reading this book for me. But let me back up.

Sanya and Harry are Californians who are transplanted to Copenhagen after Sanya has a nervous breakdown and Harry needs to finish a business acquisition in Denmark. We get a lot of flashbacks or reveals about Old Sanya - the good wife and perfect mother - and how she differs from New Sanya who is flirting with indulging in an affair with one of the partners in the business Harry is there to purchase.

The book reads like a soap opera with a little too much information about the characters' sexual appetites for my tastes. Call me a prude, but those passages don't really add anything to the story for me. 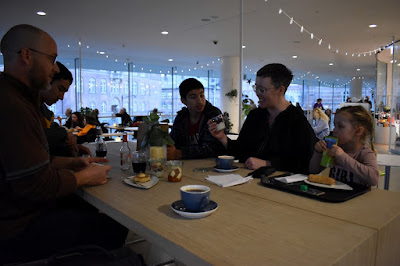 Still I really enjoyed reading Malladi's descriptions of  Copenhagen's sights, coffee shops, restaurants, and stores. "People were sitting outside in the spring sun against a backdrop of the window display of homemade jams and jellies and bio vin, which Sanya guessed meant organic wine."

One of the characters "Mandy had also been on the board of ARoS, the beautiful museum in Aarhus." That is probably one of my favorite museums in the whole world! Here are a few photos from our day there with Rikke and her daughter. 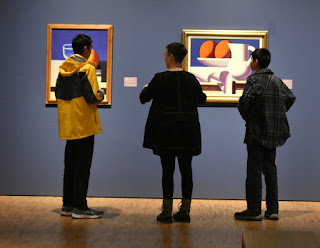 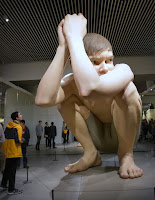 I had to chuckle about winter-bathing. We watched some people drop their clothes and run into the freezing water. Rikke and her son love it (he actually does it with his classmates!); her husband has never tried it. So, I didn't feel badly about skipping it. I mean, if a real Dane has never tried it, this wimpy California can definitely bow out. "'The Charlottenlund forest is right there,' Mandy told them. 'Ravn goes for a run every day down to the pier, and then he winter bathes.' 'Winter bathing?' Sanya asked. Mandy pointed to the expansive view of Øresund, the sound between Sweden and Denmark where colorful sailboats were kissing the impossibly blue and silky waters. 'It’s very popular with Scandinavians. They bathe in the water and then go into the sauna—you’re supposed to do it three times. It’s very relaxing. I do it in the winter only, but Ravn, he does it every day,' Penny said."

This wasn't really my kind of story, but it was nice to dive into memories of our trip to Denmark a couple of years ago.

Eating from a Pølsevogn 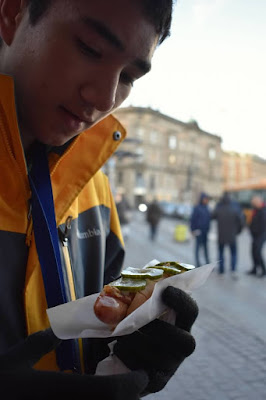 Given that all of the characters in the book are from Denmark's elite and wealthy, there is a lot of food mentioned because they eat out frequently! From burgers..."Sanya felt so energized after meeting the women that in the evening when Harry came home, she suggested that they go out for dinner to Café Bopa. He was surprised at the invitation but nevertheless delighted that Sanya wanted to leave the house. Sanya ordered a burger with all the works, even guacamole, and Harry did the same."

...to higher end establishments. "'You have to have an omelet,' Madeline told Sanya at their corner table at bistro L’Education Nationale. 'With their baguette and a glass of the house white, it’s the lunch.' ... The waiter, a Frenchman from Marseille, suggested that Sanya choose the mushroom omelet, which she did. Madeline chose the ham-and-cheese omelet, and they ordered a bottle of the house white wine, a 2015 Château de Ricaud Bordeaux Blanc."

They don't eat at Noma, but do eat at Kiin Kiin which is the only Thai restaurant outside of Thailand to have a Michelin star.

But it was the hot dog stand that she goes to with Asgar after a night of clubbing that inspired me to dig up photos and tell my memories of a Pølsevogn. "[Sanya and  Asgar] went back out into the streets and got in line in front of a hot dog stand in Kongens Nytorv where many of the city’s revelers seemed to be getting their post-party fix. ...Sanya had eaten hot dogs before. She had even eaten proper ones in Chicago and New York, but she had never eaten a hot dog this good. The sausage was crisp and covered in mustard, ketchup, deep-fried crispy onions, fresh onions, and pickled cucumbers wrapped in bread that held its ground. One bite and she moaned." 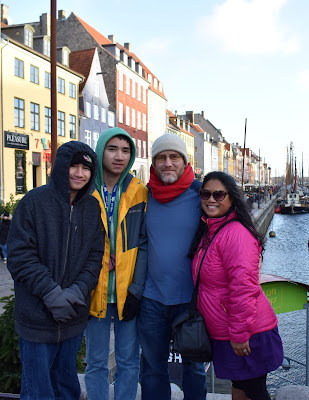 Picture us in Copenhagen. We had driven into town - from Lynge - and parked our car at the hotel. We met up with the Novaks and were walking around the city on our last day in Denmark. The wind was gusting so forcefully that it blew people over when they were standing still. And, to top it off, it was pretty darn cold. I think I read minus 2 degrees Celsius. That's 28 degrees Fahrenheit, in case you can't convert in your head!

A little while into our adventure, D was done. Cold, tired, and hungry. He just wanted to buy some souvenirs, get warm, and relax at the hotel. Jake agreed to take him. I am pretty sure he was also done. We had crammed a lot into ten days and they both just wanted to relax before our 24-hour journey home.
We snapped one last photo at the canal and off they went. R and I decided to continue on with the Novaks and walk to see Den Lille Havfrue, the Little Mermaid. But we were hungry and cold, too, and I asked the Novaks if I could buy them lunch before we continued.

A few wrinkled noses and a comment - 'this is where the tourists eat' - told me they didn't like that plan. And, I get it. I avoid touristy places like the plague when people come to visit us in Monterey. So, I shrugged my shoulders and said, "Where do you eat when you come here?" They pointed in all different directions. Within my line of sight, there were four Pølsevogn, hot dog carts. Four! Okay. Done. 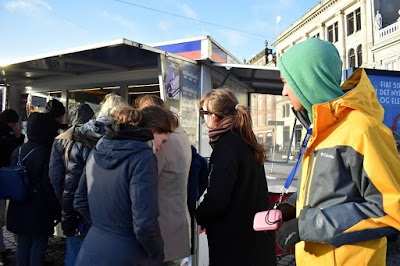 The ubiquitous pølsevogn were all surrounded by Danes. No tourists in sight. So, R and I followed the Novaks and asked them what to order. Though there were lots of options, they all said to get the Ristet hotdog med det hele. 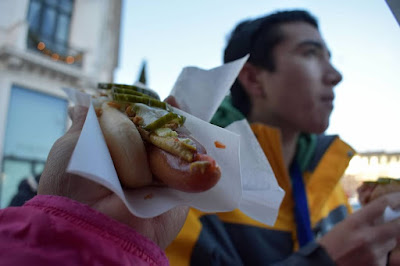 The ristet hotdog med det hele is a grilled sausage placed in a classic bun. It's served with mustard, ketchup, and remoulade. Then it's topped with raw onions, crisped onions, and pickles. It was tasty! 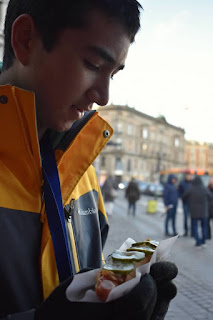 As soon as we got our hot dogs, they were off and walking. So, no, I didn't get out of the cold and wind for lunch. But we did enjoy a typical fast food lunch. On the go. From the Pølsevogn. Just like the Danes. That combination of flavors and textures was delicious.
*This blog currently has a partnership with Amazon.com in their affiliate program, which gives me a small percentage of sales if you buy a product through a link on my blog. It doesn't cost you anything more. If you are uncomfortable with this, feel free to go directly to Amazon.com and search for the item of your choice.