By Camilla M. Mann March 17, 2021
This is a sponsored post written by me on behalf of L'Ecole.
Complimentary wine was provided for this post and this page may contain affiliate links.
However, all opinions expressed here are my own. 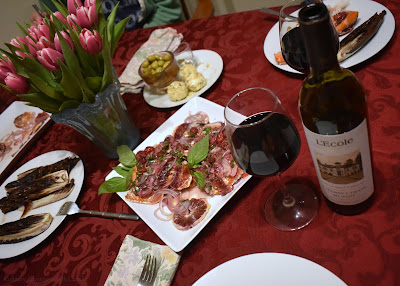 This is the second in a series of monthly posts that I'll be doing in collaboration with L'Ecole Winery.* I'll participate in a virtual tasting with their marketing manager, the winemaker, and the general manager. Then I'll post a pairing that I've created to go along with the wine. Some months I hope to share more than one pairing with one being posted on my Culinary Cam YouTube channel, such as the Savory Goat Cheese Truffles + L'Ecole's 2019 Sémillon video: here.

Last month I shared Musings on Marriage, Moruno-Spiced Burgers, &  L'Ecole's 2017 Columbia Valley Cabernet Sauvignon ahead of Valentines' Day. This month, Spring is here and I'm celebrating the change of season with a slow-roasted salmon topped with a raspberry-basil salsa. 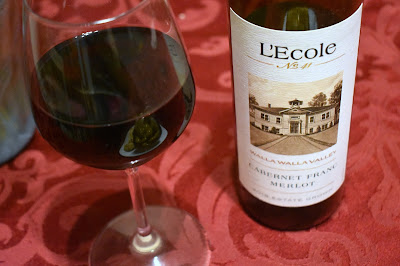 This month Winemaker Marcus wasn't able to join the discussion as he was busy bottling the 2020 Chenin. And Marketing Manager Marta was feeling under the weather though she still joined the Zoom call. So General Manager Constance took the reigns and let us through a discussion about the 2018 Walla Walla Valley Cabernet Franc Merlot which is one of their small production wines.
The white label on L'Ecole wines indicate that it's an estate wine and it's from Walla Walla. Interestingly enough this is a 50% Cabernet  Franc and 50% Merlot; and within those divisions, the varieties are also evenly divided between the Seven Hills and Ferguson Vineyards. So, the wine is 25% Seven Hills Cab Franc, 25% Ferguson Cab Franc, 25% Seven Hills Merlot, and 25% Ferguson Merlot. That's a lot of symmetry. Constance joked that it's because Marty is a chemical engineer and craves balance.

When the weather warms, many people start migrating over to rosés and white wine pairings. But this wine might have me sticking in the red wine camp for quite a bit longer this Spring. Constance revealed that though the words 'Right Bank' don't appear anywhere on the label, that's what they refer to this wine as. It embraces that Right Bank Bordeaux style though they aren't allowed to use that designation.

The Cabernet Franc has all of the structure of a Cabernet Sauvignon, but leans more feminine with some really pretty floral notes. Kinda like Spring, right? It's somewhere between the rigidity of Winter but not quite the laissez-faire of Summer.

This wine was full of red and black fruit against a more sophisticated map of spices, herbs, and wood. And on the floral side, from its Cab Franc half, there were subtle tones of rose and violet.

This, in my mind, reflects and highlights the creative, adventurous side of L'Ecole. While they do have some large production wines, it's these smaller, less mainstream wines that set them solidly in the business of making artisan wines. And this one is a seasonal treat.
This wine doesn't officially release until March 23rd and even then, it's a winery exclusive which means it's available to the wine club, at the tasting room, and from their website directly. They don't offer this wholesale to any wine retailers.
And these small productions tend to sell out within just a few weeks. So, if after reading this, you are interested in trying it for yourself, you can visit their website and pre-order it: here. It retails for just $39.
Raspberry Basil Salsa-Topped Salmon 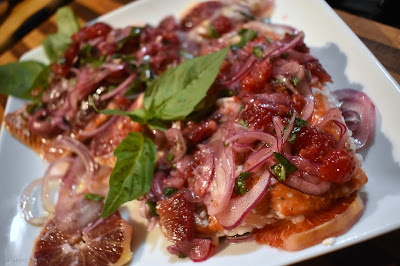 I know that most people eschew vinegar in dishes they are pairing with wines, but I have found that, in moderation, it just adds a pop of flavor. Also I was using a raspberry-based vinegar which is also less acidic anyway. Since I love the color combination of pink and red, so I decided to slow roast some salmon and top it with a fresh raspberry-basil salsa. 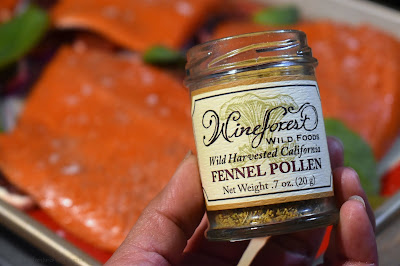 And because fennel pollen, in my mind, is the equivalent of culinary fairy dust, I sprinkled that on top of the fish.
Ingredients serves 6 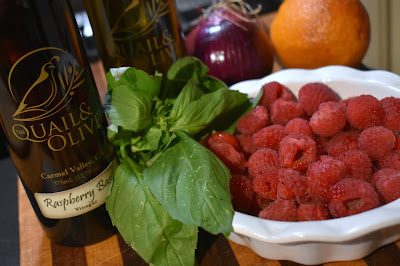 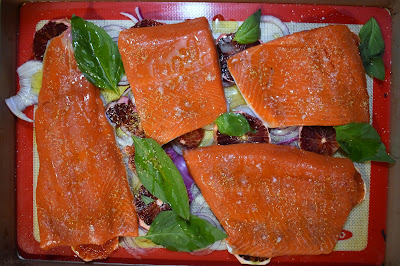 Raspberry-Basil Salsa
In a small mixing bowl, combine the onions and vinegar and let stand for 10 to 15 minutes to macerate and soften. Stir in the herbs and olive oil. Add a few grinds of salt and pepper. Just before serving, fold in the raspberries and blood orange. Taste and adjust seasonings, if needed.
Roasted Salmon
Preheat the oven to 250 degrees Fahrenheit and position an oven rack in the center.

Scatter sliced red onions and blood oranges over the baking sheet and place the salmon fillets on top. Sprinkle each piece liberally with salt and pepper. Sprinkle fennel pollen over the top of each piece as well. Nestle fresh basil leaves between the fish and drizzle with olive oil and vinegar.

Place the sheet in the oven and roast for 40 to 45 minutes, depending on the thickness of your fish. The salmon is done when it begins to flake at the thickest part. You can use a spoon to scrape off any of the white proteins that have coagulated on the top during baking.

Transfer salmon to a serving platter. Spoon raspberry-basil salsa over the top. Sprinkle with more salt and pepper, if desired. Garnish with fresh basil leaves and serve immediately.

I served this with some Crème Fraîche mashed potatoes and seared radicchio. 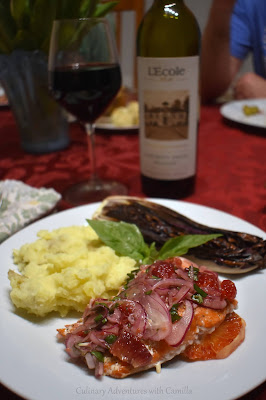