By Camilla M. Mann March 22, 2021
This is a sponsored post written by me on behalf of The Quail & Olive.
Complimentary product was provided for this post and this page may contain affiliate links.
However, all opinions expressed here are my own. 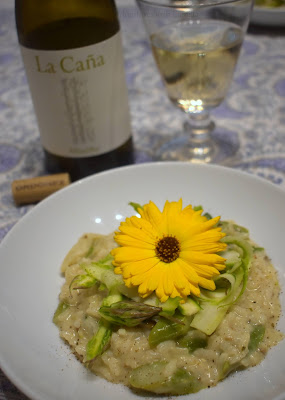 Linda of My Full Wine Glass is hosting the World Wine Travel bloggers - #WorldWineTravel - next month as we head, virtually, to Rías Baixas, Spain. One "downfall" of being a serial planner is that I often source bottles and do pairings months ahead of time, especially if the event host also plans far ahead and tells us the theme in advance. So, I had gotten my hands on a bottle of La Cana Albariño 2019 before I realized that Linda was lining up an event sponsor. So, I'll be sharing those pairings and wines for the actual event in April. For now, you get some bonus pairings!
In the Glass 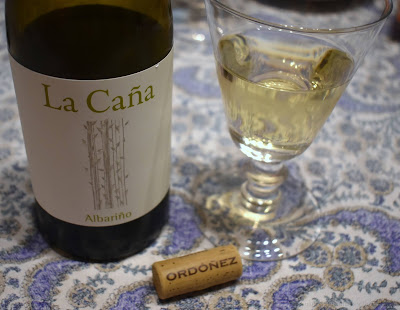 Rías Baixas is a region of the Atlantic Ocean with estuarine inlets, called rías in Spanish, that flow almost 20 miles inland. Val do Salnés on Spain's west coast is said to be the birthplace of Albariño. Traditionally, families had individual plots of the grape planted on pergolas. The grapes were hand-picked and aged on the lees in large foudres made of chestnut wood.

Jorge Ordóñez is credited with bringing Albariño to the United States in 1991 as he was the first to export it. He founded Bodegas La Caña in 2008, after years promoting and launching the Albariño variety in the United States. Named for the straw-like cañas (reeds or canes) that border the inlets along the granite coast of Galicia, Ordóñez's aim is to produce traditional, authentic, and quailty Albariño, in an artisan style.

This single varietal wine is 100% Albariño. The grapes for the wine came from vines that were planted between the mid-1960s and mid-1980s; they were dry-farmed and hand-harvested before being aged ina mixture of stainless steel and neutral oak barrels.

The wine pours a bright straw color with hints of gold. On the nose, there were notes of apple blossom and wet granite. But, on the palate, this Albariño has that traditional lean of citrus fruits. The brightness of this wine lingers but finishes with an elegant creaminess. It made me think of risotto...and the season made me think of asparagus though a delicate seafood risotto would have worked just as well. 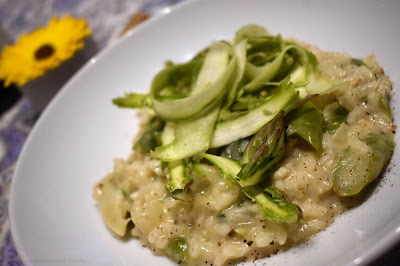 Asparagus are always the harbinger of Spring for me and you'll always find me making Quick Pickled  Asparagus as soon as I start seeing them in the markets. But I decided to make a risotto with asparagus and leeks. The asparagus is soft and tender inside the dish, but I garnished it with shaved raw asparagus on the top for a different texture and fresher flavor. 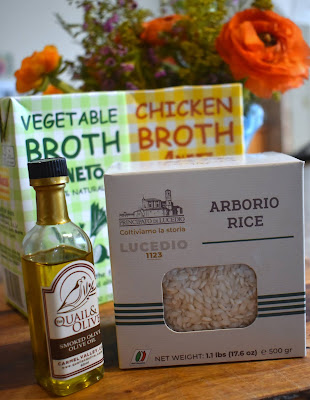 And, thanks to local-to-me The Quail & Olive*, I was able to try some great products from their pantry section to make this dish, including their arborio rice, smoked olive oil, and broths by Aneto. So tasty!
Ingredients makes 8 servings 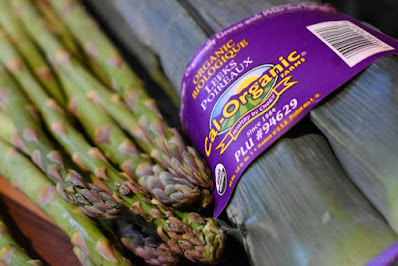 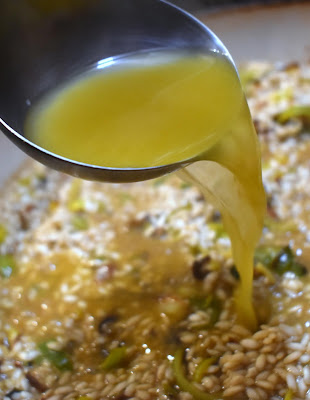 Bring liquid to a boil in a sauce pan, then reduce to a simmer and keep it on a burner adjacent to your risotto pan.
Melt butter in olive oil in a heavy bottomed pan. Stir in the leeks and cook until leeks are translucent and beginning to caramelize. Stir in the arborio rice and toast for 5 to 6 minutes. Add in the asparagus pieces. Then ladle by ladle, add in the stock until it's absorbed. Keep stirring. Repeat until the rice is cooked. If you need more liquid, just add more; if you don't use all of the stock, that's okay, too. 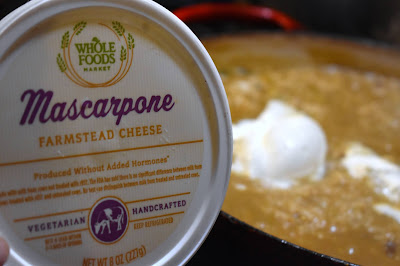 Stir in the mascarpone cream and fresh herbs. Let stand for five minutes. Season to taste with salt and pepper. Use a peeler to shave the whole asparagus into ribbons.
Spoon risotto into individual serving bowls and top with asparagus ribbons. Serve immediately. Let diners grate parmigiano reggiano over the top.
I can't wait to explore more of the wines from the Rías Baixas. Stay tuned for the #WorldWineTravel event next month. ¡SALUD!

on the web, on Facebook, on Instagram, on Twitter
*Disclosure: I receive compensation in the form of complimentary products for recipe development
and generating social media traction. All opinions are my own.