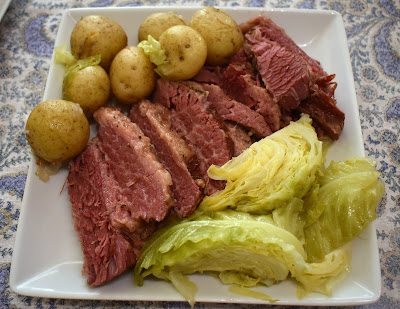 So, I know that corned beef and cabbage isn't a traditional Irish dish. I've known that for years, but it didn't stop me from making it and filming the process for the Culinary Cam YouTube channel. Still, it''s true: Irish people don't eat corned beef and cabbage on St. Patrick's Day, or really any other day of the year. Though, I discovered that the Irish did actually make corned beef because their salt taxes were lower. It allowed corned beef to become a great Irish export as it traveled well all over the world, even as far as the West Indies.

I can't be too surprised really that Irish people don't eat this.  I mean most Americans would swear up and down that spaghetti and meatballs is a traditional Italian dish; having lived in Italy for over a year, I can honestly say that I never once saw - or cooked - spaghetti with meatballs.  Spaghetti, yes.  Meatballs, yes.  But together, no, definitely not.

Still this realization doesn't stop me from making a corned beef and cabbage dinner for my family every St. Patrick's Day.  I just told them that it wasn't really Irish. And to that end, we did try an Irish Beef Guinness Stew that is traditional!

You can watch the video process on Culinary Cam...or here...

I started with a pre-brined and pre-spiced corned beef brisket from Trader Joe's.  I placed it in a large soup pot, covered it completely with water, brought it to a boil, and reduced heat to a simmer and cooked on low heat for three hours. 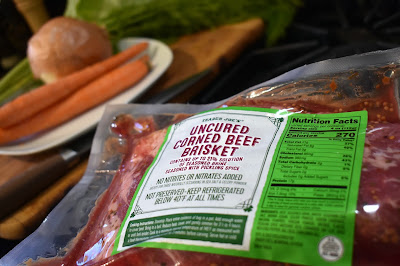 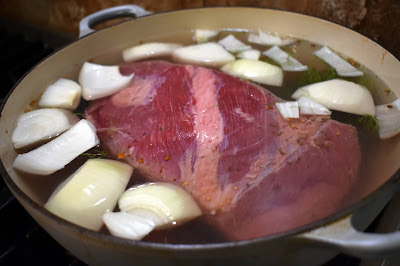 Place the onions, carrots, and herbs in a large pot. Nestle the brisket on top. Bring the pot to a boil. Then cover and reduce the heat to a simmer. Let cook for three hours.
After three hours, uncover and drop in the baby potatoes. Return the liquid to a boil. Reduce the heat to a simmer and cook, covered, for another 10 minutes.
Add in the cabbage. Cover the pot and let cook for 15 minutes.
Remove cabbage wedges and potatoes from the pot. Take the brisket out of the cooking liquid and let rest for 15 minutes before slicing. 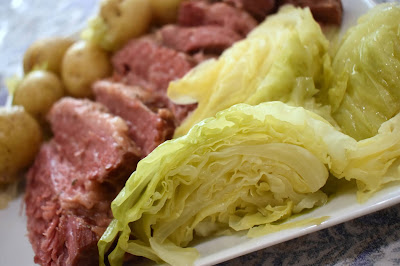 Place everything on a platter or individual serving plates. Enjoy!