By Camilla M. Mann November 25, 2016
Another of my veggie sides on our Thanksgiving table was this easy Brussels sprout salad. So easy, but so full of flavor with the crushed Szechuan pepper dressing. Szechuan peppers are not actually peppers. They are sometimes called Chinese coriander. 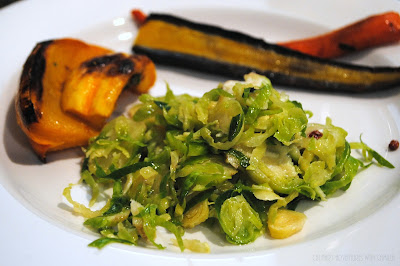 A couple of things to note: they aren't spicy hot like other peppers. In fact they aren't chile peppers at all. They are the seed pods from the Chinese prickly ash bush. They are one of the five spices in Chinese Five Spice along with fennel seeds, star anise, cinnamon, and cloves.

For this dish, you want to shred or thinly slice the Brussels sprout heads. I have, long ago, painstakingly peeled each leaf off the heads, but didn't have the patience for that this time. So, I sliced them on my mandolin. I think, too, you can actually purchase them already sliced. Do that if you're pressed for time! You'll have a delicious side dish on the table in no time flat. This recipe serves 12, but you can easily scale back. The dressing will keep in the fridge for a week or so, in case you have extras. 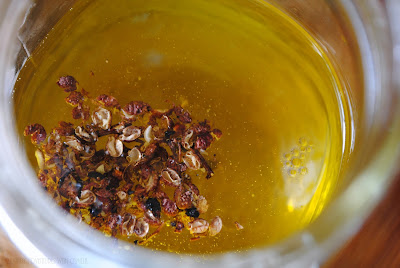 Procedure
Place your Brussels sprouts in a large mixing bowl. Crush your Szechuan pepper with a mortar and pestle and set aside.

In a mason jar, pour the rice wine vinegar and olive oil. Add in the crushed Szechuan pepper and a few grinds of salt and pepper. Place the lid on the jar and shake to emulsify.

Pour the dressing over the Brussels sprouts and toss to coat. Let stand for at least 15 to 20 minutes for the sprouts to soften a bit.