By Camilla M. Mann July 07, 2020
This is a sponsored post written by me in conjunction with Winesellers, Ltd..
Wine samples were provided for this post and this page may contain affiliate links. 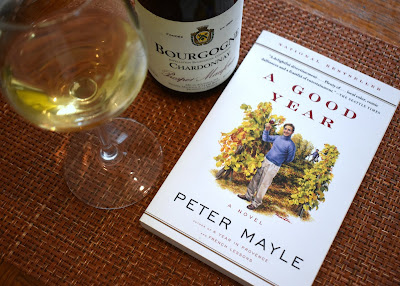 This summer I have planned a few posts in conjunction with Winesellers, Ltd.* To begin, I am heading virtually to France! I am sharing a book set in France or written by a French author, a French wine - courtesy of Winesellers - and a food pairing for that bottle. It's my version of a grown-up summer reading list! I'm calling it 'Pages and Pours.' Next month I'll be turning my eyes towards Chile. 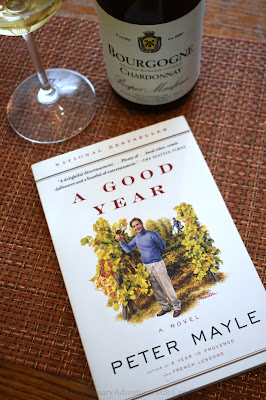 I have read several of Mayle's books. And while he isn't French, he is a Francophile through and through. I've previously enjoyed his French Lessons when I made Poulet à la Normande; A Year in Provence with an inspired braise; and Chasing Cezanne that didn't inspire a kitchen creation. I completely forgot that this book - A Good Year - was made into a movie starring Russell Crowe and Marion Cotillard. When we watched that for #FoodNFlix in 2015, I shared a recipe for Civet de Canard.

A Good Year, the book, bore little resemblance to the movie. And here's something you rarely hear uttered by readers: The movie was so much better than the book.

Londoner Max Skinner quits his job, after a falling out with his boss, and receives a letter from the notaire in a Provençal village, informing him that his Uncle Henry has died and left Max the house and the attached vineyard. Reluctant to even visit, Max is encouraged by his friend and former brother-in-law, Charlie, to go take a look.

The motley crew of characters includes the attractive notaire, Nathalie Auzet; the man who runs the vineyard, Claude Roussel; Claude's wife who makes a mean civet; Claude's sister-in-law, the flamboyant Mademoiselle Passepartout, who becomes Max's housekeeper; Fanny, the gorgeous proprietor at a local cafe; and a young American woman who turns out to be Uncle Henry's love child.

A Good Year is a pleasant albeit slow-moving story. Additionally, the so-called mystery has a predictable outcome. But it's Mayle's descriptions of the food and wine that had me continuing to turn the pages. It's what he excels at, after all. 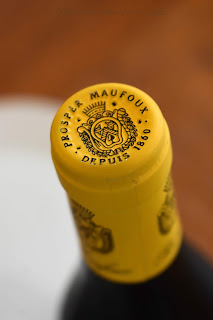 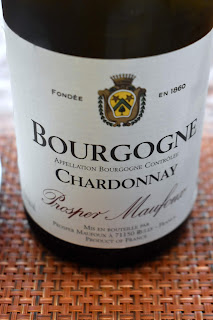 I received a bottle of Prosper Maufoux Bourgogne Chardonnay 2017 from Winesellers and did some reading. Bourgogne Blanc, White Burgundy, is made from Chardonnay grown in the Burgundy region of France which has long been connected with winemaking. In the first century AD, the Romans cultivated vineyard there and, later, Cistercian monks crafted wines for the local aristocracy.

Like Nathalie Auzet, in the book, Prosper Maufoux was a notary. And in 1860, he shuttered his practice to embrace his passion for wine. He started his own vineyard in Santenay, in the heart of the vineyards in southern Côte d’Or. Through several generations Maison Prosper Maufoux's wine distribution has expanded, first to England, then the Netherlands, and all the way to the United States. The torch passed from the Maufoux family line to Eric Piffaut whose roots go back to Burgundy in the late 19th century. And it has been under the Piffaut mantle that oenologist Nadine Gublin took over winemaking at the estate. She was named first female winemaker of the year by La Revue du Vin de France and continues to amass accolades for her wines. 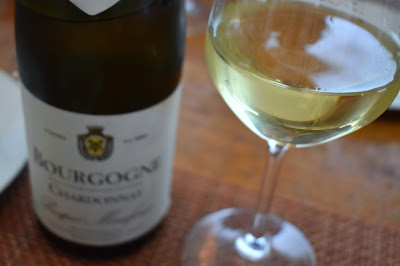 The Prosper Maufoux Bourgogne Chardonnay 2017 poured a pale green-gold in color with some flecks of platinum highlights. On the nose, there were aromas of citrus softened by hints of honey and earthy chestnuts. On the palate, this wine was surprisingly full with a pleasant mouthfeel. Deeper notes of nuts came through as the wine warmed throughout dinner. 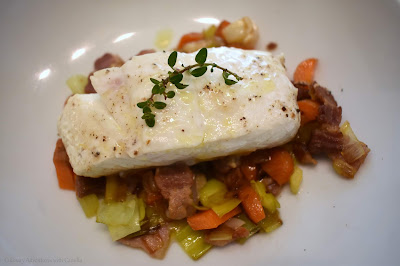 I wanted to make a more traditional French dish to pair with the wine and landed on my version of Halibut à la Barigoule, a Provencal peasant dish with a fish braised in white wine with carrots and bacon. 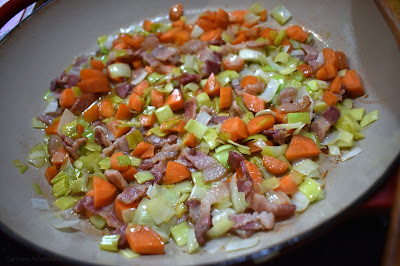 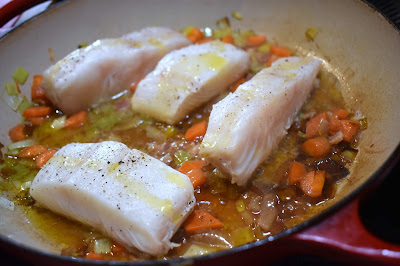 In a pan with a lid - I used my Le Creuset braiser - brown the bacon over medium heat until the fat is rendered and the meat is browned, approximately 8 minutes. Add the carrots, celery, leeks, and garlic to the pan. Cook until the vegetables soften and the leeks begin to caramelize, approximately 8 to 10 minutes. Every so often, scrape the brown bits from bottom to keep them from burning.

Raise heat to high. Place 2 sprigs of thyme in the pot. Pour in wine and water and bring to a boil. The liquid should be reduced and thickened. Lower heat to medium. Add halibut, sprinkle with salt and pepper, and cover. Cook until fish is opaque and cooked through, approximately 6 to 8 minutes.

Transfer fish to serving plate. Discard thyme sprigs. If the sauce is too liquidy, increase heat to high and reduce as needed. Adjust seasoning to taste. 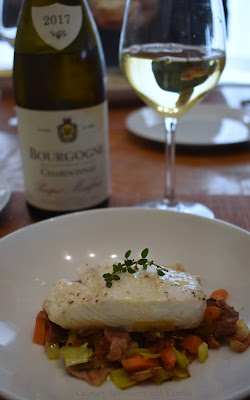 To serve, spoon vegetables into a bowl and place cooked fish on top. Garnish with fresh thyme and another sprinkling of salt and pepper, if desired.

I have enjoyed a few other books about or set in Franch so far this summer: Murder à la Carte by Susan Kiernan-Lewis had me making Herbed Sourdough Fougasse; Murder in the South of France also by Susan Kiernan-Lewis inspired Brandy-Laced Chicken Liver Pâté with Balsamicy Onions; and I reminisced about meeting pigs and making sausages after reading A Pig in Provence: Good Food and Simple Pleasures in the South of France by Georgeanne Brennan. I am also linking this post to the July 2020 edition of Foodie Reads. 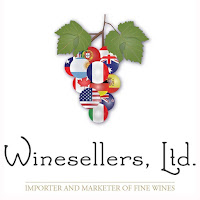 
Click to see what everyone else read in July 2020: here.