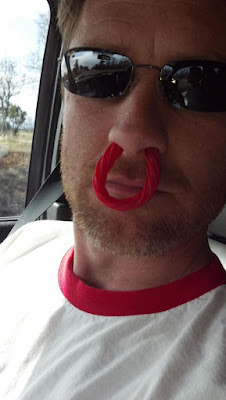 I just finished a book about the ultimate American road trip - Not Tonight, Josephine: A Road Trip Through Small-Town America by George Mahood.* Maybe it was my way of virtually traveling the country while we're entering out nineteenth week of being sheltered-in-place during this coronavirus pandemic. Pause on that for a moment. Nineteen weeks. Our annual summer camping trip was canceled - maybe postponed! - and schools are starting in a couple of weeks in a completely distance learning model. So, it doesn't appear we'll be getting out and about any time soon. Boo. Mahood's book was a wonderful antidote to the travel itch.

First things first. The photo above was taken by a friend when the guys did a crazy road trip years ago from the Monterey Peninsula up into Oregon to pick up a motorcycle. Boys!

Before I picked up this book, I had never heard of George Mahood. Sorry, George. Now that I've read this, and shared snippets with my husband, I am definitely a fan. I'll be picking up several of his other books soon.

This is true account of the misadventures of George, Mark, and Josephine for the first part, and, then, George, Rachel, and Josephine for the second part. George, Mark, and Rachel are Brits traveling around the United States. Josephine is a tattered mini van that takes them from New York to California and back again...but not without some laugh outloud mishaps. Car trouble, police trouble, immigration trouble. Mahood makes it all funny.

Here are just a few passages I wanted to share... 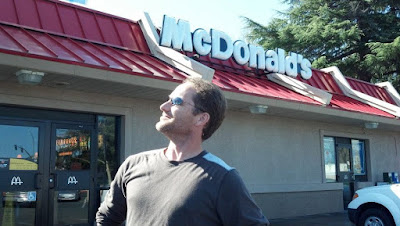 "I had made a pact with myself before coming to America to try not to visit McDonald’s during my time in the USA. This wasn’t because of any anti-consumerist stance or anything. It was simply because McDonald’s has come to symbolise America and its cuisine. I regularly frequent McDonald’s back in the UK, and it seemed a shame to come to such a vast country and then eat the same food that I could eat back home" (pg. 21). On the aforementioned guys' trip, Jake and Brian did stop at McDonald's...but only to use the bathroom, they said. Ha.
"This was what it was all about. Guitars in the back, potato chips in the front, and carefree smiles on our faces. The radio was blaring out Bruce Springsteen’s Born in the USA (it wasn’t), and we hit the New Jersey Turnpike with a wealth of choices and opportunities ahead of us. It was almost too good to be true. And it was" (pg. 49).

After spending way more money on car repairs than we had planned to, we needed to budget for food a bit better. We had begun a diet of bologna sandwiches and bananas. Bologna sandwiches were cheap and easy. American bread, we discovered, lasts forever. It’s weird and spongy, with an almost cake-like texture. It tastes quite like cake too, but is apparently bread. Its seemingly unlimited shelf life makes it a backpacker’s best friend" (pg. 62).

"It was not until an hour and a half later that we discovered that Rawlins was 76 miles from Rock River. It was gems like this that fuelled my love of America. In the UK, there are very few things that anyone would consider driving 76 miles for. In rural America, 76 miles is an acceptable distance to travel for a good breakfast" (pg. 258). Years ago, when I was visiting a friend in Texas just after I graduated from high school, I remember being floored that she was waking me up at seven in the morning so that we could drive to lunch. Well, we were driving nearly 150 miles each way to have lunch and eat peaches. It was actually one of the more memorable days of my trip and I am forever grateful for that jaunt to Fredericksburg.

His commentary about the American holiday of Thanksgiving, red Solo cups, and (pre)judging the quality, or lack thereof, of a restaurant's fare by the number of antlers on the wall all had me chuckling aloud, too.

But, the passage from where the book's title comes, when George is pleading with the car to not break down: "'DAMMIT! NOT TONIGHT, JOSEPHINE!' I shouted, banging my fist on the steering wheel and giving the horn a loud blast that nobody would hear but me. 'Please, Josephine…' I said, more calmly this time, '…not tonight'" (pg. 195). Mahood writes a lot about this road trip food. I was tickled to read about his stop in Mariposa on their way from Yosemite to Petaluma. "Later that evening we checked back into the same motel, where the man offered us an even cheaper nightly rate. We ate at the nearby Happy Burger Diner in Mariposa, which proudly claims to have the 'largest menu in the Sierra'" (pg. 164). 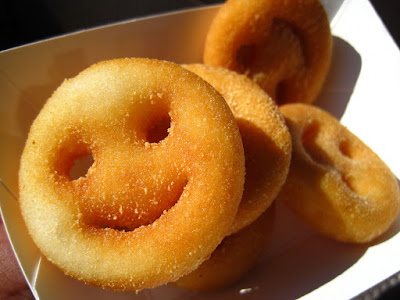 And I considered making those happy fries in honor of this book. Aren't they cute?! 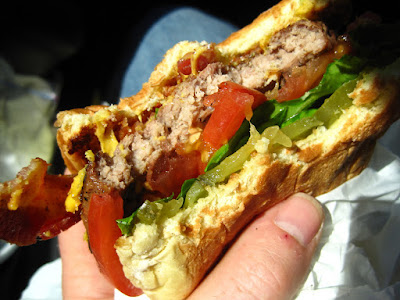 The history of the hamburger, almost inspired a burger. "In 1885, Charlie Nagreen – now known as ‘Hamburger Charlie’ – was selling pork sandwiches at the Seymour Fair and unknowingly created the hamburger when he sold a meatball to a customer sandwiched between two slices of bread. Seymour has embraced its hamburger history; it has a dedicated Hamburger Museum and an annual celebration called Burger Fest" (pg. 303). That photo is also from Happy Burger in Mariposa!

But what inspired me into the kitchen was George and Mark's stint on a chicken ranch in Petaluma where they were housesitting for family during the winter holidays.

"There were at least 20 chickens on the ranch and they were all prolific layers. It was our responsibility to feed them each day, let them out each morning and lock them up each evening, making sure Fluffy was kept well away while they were out. Fluffy was my uncle’s huge pet/guard dog Rottweiler, named after the three-headed dog in Harry Potter. Not that this Fluffy had three heads of course. Despite being very well trained and the most docile of dogs, Fluffy still liked to play with the chickens if he ever got the chance… with his teeth. On the days we had overlapped with my aunt, uncle and three cousins, there had been enough eggs for us all to have them for breakfast each morning. Now there was only Mark and me, the only way for us to stay on top of the vast quantity of eggs was to eat them for three meals a day. They were good eggs, though, and as we had almost no money left, three free meals a day suited us perfectly. Mark was given the role of head egg chef as he was better at cooking scrambled eggs than me. I was his young apprentice" (pg. 174).
Jake's Scrambled Eggs 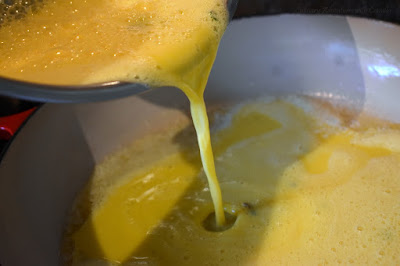 Their marathon of scrambled eggs inspired me to share this. It happened at about week eight of our shelter-in-place orders. One morning in May, Jake got up and announced, "I'll make the eggs this morning." What?!? So, after twenty two years together, I find out he doesn't like my scrambled eggs. Fine. "Watch and learn," he said. 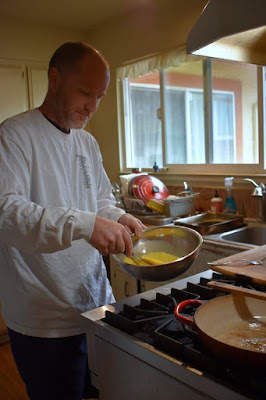 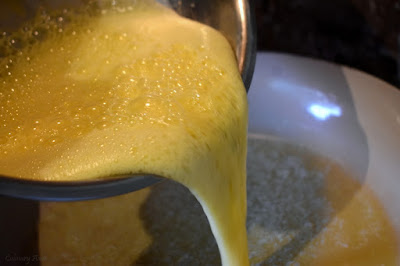 Procedure or Technique
Crack your eggs into medium mixing bowl. Add water and whisk or whip until the eggs and yolks are fully combined into a pale, yellow mixture. The more air you get into the eggs, the more light and tender they will be. Whisk in some salt and pepper.

Melt the butter in your pan until the butter is foamy, but not browning. Keep the heat low as it's key to making the eggs custard-like and soft!

Pour the beaten eggs into the pan and let them sit for 30 seconds or so. Use a spatula to move the eggs from one side of the pan to the other to spread the uncooked eggs over the pan surface.

Stop when the eggs seem mostly set. This should only take a minute or two. Any longer and they'll go from fluffy to rubbery in the blink of an eye! 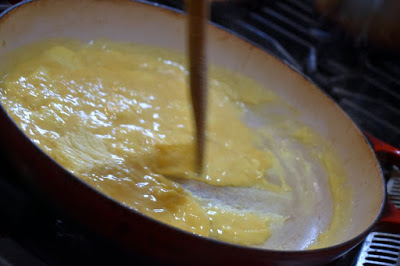 That's it. No real secret. Just a few techniques that make all the difference: whipped eggs, real butter, and low heat.


Click to see what everyone else read in July 2020: here.