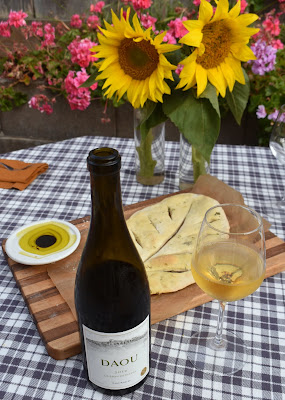 Murder à la Carte by Susan Kiernan-Lewis* is actually the second book in a series. Though I read the first two in order, I ended up inspired into the kitchen out of order! This book picks up where Murder in the South of France leaves off. 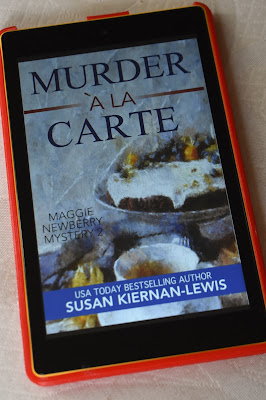 Maggie Newberry and her French newly reformed criminal boyfriend, Laurent, leave Atlanta, Georgia (her hometown) to relocate to a mas (traditional French country home) and vineyard that he has just inherited in St-Buvard, a completely fictional village, Provence, France.

Their plan is to spend a year in France, harvest the grapes, make some wine, then decide what to do with the land and the house. They quickly discover that the property was the scene of a grisly murder of four during WWII. The motley crew of characters include Maggie who almost flat-out refuses to learn the language or the customs of her new country (as someone who has lived in other countries, this grated on my nerves. Just try!); Laurent who, having given up his criminal past, is displaying his prowess in the kitchen and the bedroom (I began to gloss over the whole he-makes-me-weak-in-the-knees scenes. We get the idea, really, we do.); Connor, an American playboy who has just impregnated a local village teen; Maggie's American ex-patriate friends, Grace and Windsor, who are going through fertility treatments and already have a horrifically spoiled daughter; and a host of locals from the village baker, the butcher, other vintners; oh, and the resident gypsy thug. Then there's a present-day murder at their property that needs solving.

I would definitely characterize this as chick-lit with a some mystery and a lot of food and wine thrown in. I preferred this second book to the first, but I doubt I'll continue with the series unless I really can't find anything else to read. 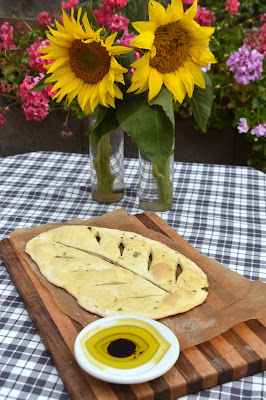 As I mentioned, there's quite a bit of food mentioned in the book. Madame Marceau leaves them a Gâteau de Fruits Battus that Laurent describes as "a traditional cake for a vigneron’s wife to make. It is made from the broken, too-ripe grapes." Maggie whines, "Are you telling me I’m supposed to make this grape-cake too?" (pg. 344).

But she does make Cassoulet au Truffes for Thanksgiving when her parents and niece come for a visit. The out of season truffles cost her about twenty dollars per ramekin!

When Laurent sets a small copper tray of escargots in front of Maggie, she makes a face. "The snails winked out at her like six black erasures embedded in oily pools of parsley butter. 'Laurent, you know I hate snails.' 'These are petits gris,' he said, ignoring the face she was making. 'You see? With fennel and thyme'" (pg. 145). 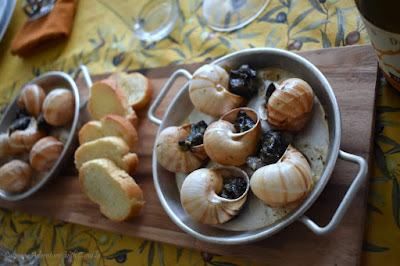 My escargot weren't petits gris, but anything with butter and garlic is a hit in my house...even snails!

I had to look up the ingredients for the Omelette au Broccio. That's an omelette made with a Corsican whey cheese, similar to ricotta, and fresh mint. If I can get my hands on that cheese, I am definitely making it along with "pissaladière, a creamy onion tart dotted with anchovies and black olives," mousse d’abricots avec un coulis de framboise, another pot of Bourride à la Sétoise, and "golden-brown mussel fritters and slabs of cinnamon toast topped with hot eggplant slices and goat cheese." 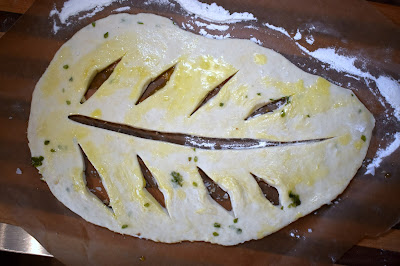 In the end, I was inspired by this exchange when Maggie brings home a fougasse. "'You brought a fougasse?'he asked with surprise, pulling the flaky flat bread from the box Maggie had put on the counter. 'Madame Renoir thought I was upset. Her way of dealing with stress is to give you free buns'" (pg,. 344)


Fougasse is a type of bread typically associated with Provence but found, with minor variations, in other regions of the country. Some versions are sculpted or slashed into a pattern resembling an ear of wheat. I made mine more of a leaf and added in some herbs from the farm on which D is doing his summer internship. Besides I always have sourdough starter on my counter these days. 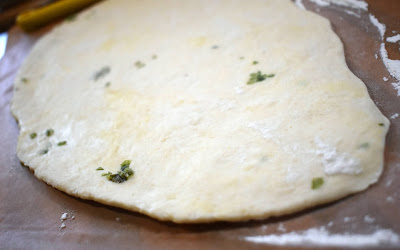 Ingredients makes 4 to 6, depending on size

Procedure
In a large mixing bowl, combine the sourdough starter, flour, warm water, and sea salt. Stir with a fork until everything is moistened and you have a shaggy dough. Add in a glug of olive oil and the fresh herbs. Turn the dough onto itself three or four times until the surface glistens and the bowl is oiled. Cover the bowl with a kitchen towel and let the dough rise for at least ninety minutes. It should be doubled and pillowy.

Preheat the oven to 475 degrees Fahrenheit

Divide the dough into 4 to 6 pieces. On a well-floured piece of parchment paper, roll out a piece of dough to about 1/8" in the shape of a leaf.

Make a large slit down the middle of the leaf and a few smaller diagonal ones along to sides. Widen the slits with  your fingers and arrange on a baking sheet. Brush the top with olive oil and sprinkle with

Place the sheet in the oven and bake for 14 to 16 minutes. The bread should be nicely browned and puffy. Serve warm with another swabbing of olive oil and sprinkling of salt.