A Book, An Inspired Braise, and A (Surprise!) Bottle of Red from Provençe #Winophiles #Sponsored

By Camilla M. Mann February 15, 2019
This is a sponsored post written by me in conjunction with the February #Winophiles event.
The book was provided for this post and this page may contain affiliate links. 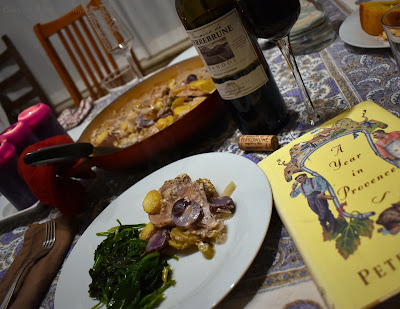 This month, Wendy of A Day in the Life on the Farm is hosting the French Winophiles. She levied a fun, two part challenge to the group. You can read her invitation: here.

She offered us copies of A Year in Provence by Peter Mayle - courtesy of Blue Vase Book Exchange* - to accompany our exploration of Provençal wines and food pairings. Bonus points, she said, for not opening up a Provençal Rosé. Needless to say: this wine-swilling bibliophile was in. Immediately. 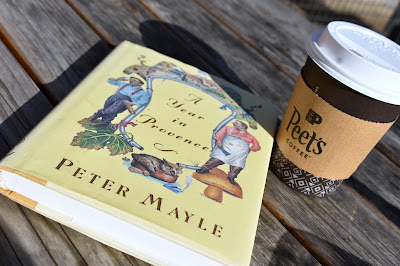 When I picked up the package at the post office, I was so excited to have a new-to-me book for the weekend. I had to accompany D and his project partner downtown one Sunday last month. So, while they planned a strategy and identified a shot list of photos they needed to take, I sat there with some cheese and a coffee, enjoying the sun, and dug into the book. This is a breeze to read. If you haven't read it and are looking for an afternoon's diversion to Provençe, pick this up! 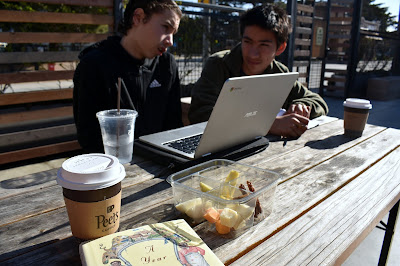 As much as I love travel and food memoirs, I am surprised that this hasn't crossed my shelf yet. Organized as a calendar year - each chapter encompasses a month - this memoir details Mayle's first year in Provençe as a British ex-patriate who has purchased a house in France and is in the process of renovating.

I read that Mayle passed away last January - 2018 - after having lived in France for over a quarter of a century. I will definitely be looking up more of his books as I really enjoyed his narrative voice and, of course, the picture he paints of his adopted country.

Some entertaining passages I want to share that illustrate his skill with a pen...and some differences he notes between the Brits and the French.

In January: "The effect of the weather on the inhabitants of Provençe is immediate and obvious. They expect every day to be sunny, and their disposition suffers when it isn't. Rain they take as a personal affront, shaking their heads and commiserating with each other in the cafés, looking with profound suspicion at the sky as though a plague of locusts is about to descend, and picking their way with distaste through the puddles on the pavement" (pg. 10).

In June: "It had taken me some months to get used to the Provençal delight in physical contact. Like anyone brought up in England, I had absorbed certain social mannerisms. I had learned to keep my distance, to offer a nod instead of a handshake, to ration kissing to female relative and to confine any public demonstrations of affection to dogs. To be engulfed in a Provençal  welcome, as thorough and searching as being frisked by airport security guards was, at first, a starling experience" (pg. 101).

In December: "It is very different with the French. They are no sooner given a glass before they put it down, presumably because they find conversation difficult with only one hand free. So the glasses gather in groups, and after five minutes identification becomes impossible. The guests, unwilling to take another person's glass but unable to pick out their own, look with longing at the champagne bottle. Fresh glasses are distributed, and the process repeats itself" (pg. 203).

A (Surprise!) Bottle of Red 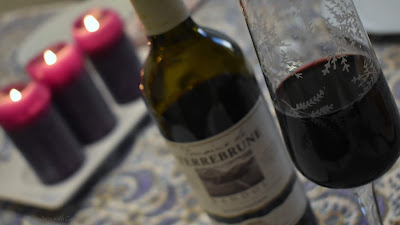 Probably like most people, when I think of wines from Provençe, I automatically think of Rosés. I've opened a fair share of those after all. I've shared these pairings Spiced Orange Salad + Cave de Saint-Roch-les-Vignes Côtes deProvence Rosé, Warm Weather Rosé + Cheese Pairings, and Tapenade-Topped Sablefish + Cave de Saint-Roch-les-Vignes Côtes de Provence Rosé; and, though not a wine-food pairing, I posted Tasting Notes: Luc Belaire Rare Rosé. So, lots of pinks there.

When Wendy mentioned that she'd like us to find reds or white, as we could, I was on the hunt. And I found one. I picked up a 2014 Domaine de Terrebrune from Bandol, Provençe. It's a single varietal Mourvèdre. Surprise! My bottle of wine is not a Rosé.

Mourvèdre is primarily a blending grape - it's the 'M' in GSM blends - but is increasingly being bottled on its own. When I find it on its own, I am always captivated. The grape goes by a few different names worldwide. The grape we know as Mourvèdre goes by the name Monastrell in Spain and Mataro in Australia. 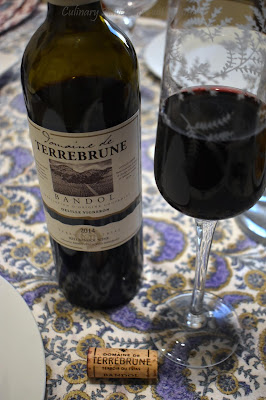 This wine has strong garrigue aromas which refers to the wild, aromatic low-growing vegetation on the limestone hills of the Mediterranean coast. Think juniper, thyme, rosemary and lavender; 'garrigue' refers to the lot of them. For this almost purple-hued wine, I got mostly lavender and thyme on the nose. And the salinity on the tongue definitely made me think of the Mediterranean coast of Provençe. There was also some licorice undertones. The noticeable tannins harmonize nicely with the structure of the wine making this a delightful sip. 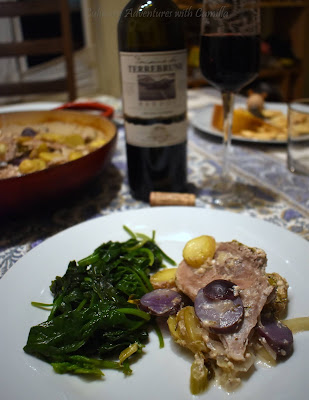 I took inspiration from this passage in the January chapter: "The cold-weather cuisine of Provençe  is peasant food. It is made to stick to your ribs, keep you warm, give you strength, and send you off to bed with a full belly. It is not pretty, in the way that the tiny and artistically garnished portions served in fashionable restaurants are pretty, but on a freezing night with the Mistral coming at you like a razor there is nothing to beat it" (pg. 13).

So in the last weekend of January, I made a Provençe-inspired braise with boneless pork chops I had in the fridge. And to match the garrigue notes of the wine, I added in thyme, rosemary, and lavender to the dish. With the cream and potatoes, it definitely sent us to bed with fully bellies! 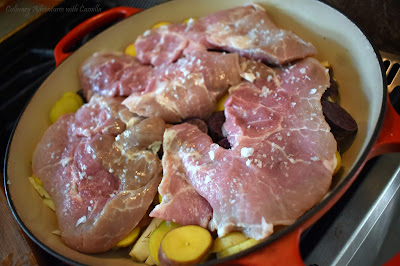 *NOTE (because a reader asked for clarification): When I write 'European style mustard' I just really mean anything other than (American) yellow mustard. It could be Dijon, English, or whole grain. You could use any kind that you have, but the latter kinds have a little bit more texture and heat, in my mind. 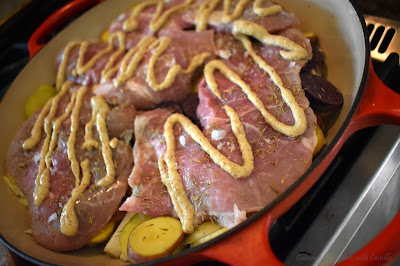 Preheat oven to 300 degrees F. In a small mixing bowl, blend together the lavender, rosemary, thyme, and sea salt. 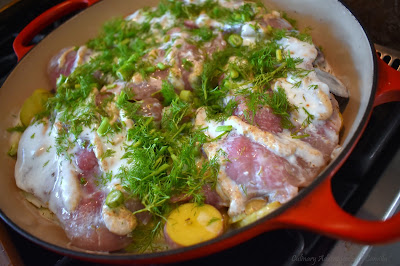 Add some mustard on top of the pork and use a knife to make a thin layer. Pour in the liquids. If the liquid doesn't reach to the bottom of the meat, add in some water. Top with fresh fennel fronds and  the cover the dish or use the lid. 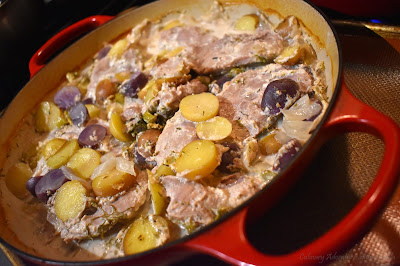 Place in the oven and let braise for 2 hours. Remove the lid. Turn the meat and potatoes to make sure they are fully covered in the sauce and return it to the oven for another 10 to 15 minutes. 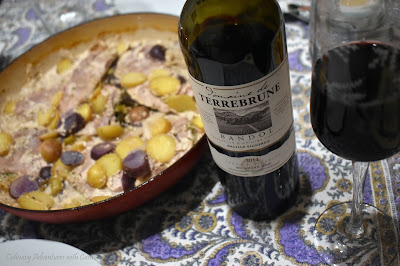 Serve hot with a wine from Provençe...a red wine, if you can. I also served this with wilted spinach and a bitter greens salad in a mustard vinaigrette. What a delicious meal, inspired by a fun read. Thanks for hosting, Wendy! And thanks, too, to Blue Vase for the book. Merci beaucoup! 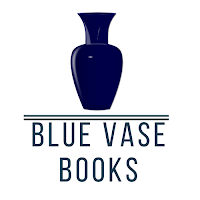 Find them on the web, on Facebook, and on Amazon
I am also linking this post up to February's #FoodieReads: here.