By Camilla M. Mann July 10, 2020
This is a sponsored post written by me in conjunction with the July #WinePW Moldova event.
Wine samples were provided for this post and this page may contain affiliate links. 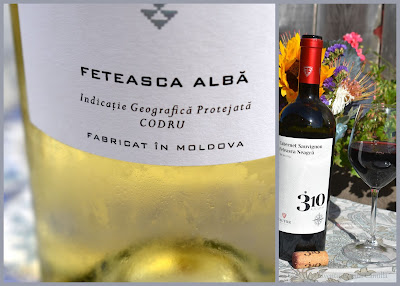 Jeff of Food Wine Click! read his invitation here. The Wine Pairing Weekend bloggers headed, virtually of course, to Moldova...and Jeff even arranges for several of us to receive samples from Wines of Moldova.* I received three bottles for the event and am showcasing two of them. More on that soon.

If you are reading this early enough, feel free to join us for a live Twitter chat on Saturday, July 11th at 8am Pacific time. Follow hashtag #WinePW and be sure to add that to any of your tweets so we can see it. All of these posts will be live between Friday, July 10th and early Saturday, July 11th. Cheers!

Can you find Moldova on a map? My boys could. Thankfully. But we did cook some Moldovan food back in 2013 during our cooking around the world adventure. 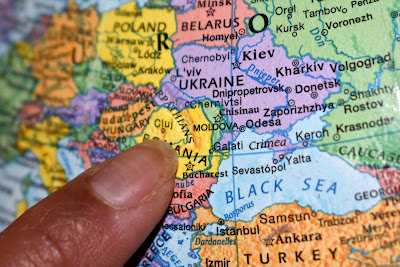 Back then, I made a Moldavan Beetroot Salad which wasn't a hit, then, but I suspect R's palate has developed since then! Also, back then, we discovered Sarmale, Moldovan Cabbage Rolls. I'm including the link to that original post because my Enthusiastic Kitchen Elf was pretty adorable and helpful. But my updated recipe is shared below with a current wine pairing.

In case you are unfamiliar, landlocked Moldova lies between Romania and Ukraine and consists of hilly grasslands flanked by the Prut and Dniester Rivers. Mostly pastoral lands, Moldova was part of Romania before World War II, and a majority of Moldovans still speak Romanian. Soviets annexed Moldova in 1940, and Russians and Ukrainians settled in the industrial region east of the Dniester (known as Transdniestria). After Moldova gained independence in 1991, Transdniestria seceded, making Tiraspol its capital. 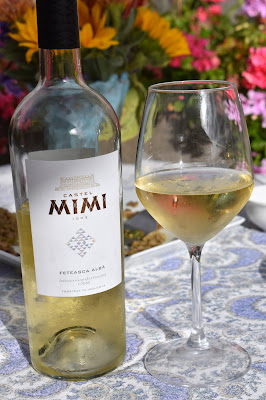 You might be wondering about the title of my post - Maidens from Moldova. Feteasca means 'maiden' in Romanian, the state language of Moldova, and the name of three distinct, indigenous grape varietals: Feteasca Regala (royal maiden), Feteasca Neagra (black maiden), and Feteasca Alba (white maiden). 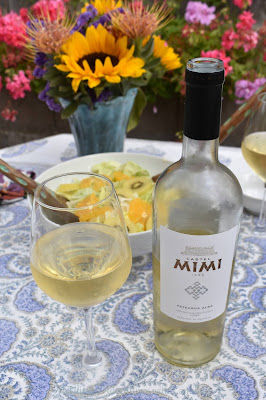 I received two of the maidens to sample. First was a 'white maiden', Castel Mimi Feteasca Alba. You can read more about Castel Mimi from our host, A Moldova Phoenix Story - Castel Mimi; Jeff attended a press trip to Moldova that included Castel Mimi in 2019. What a treat. I'm jealous! 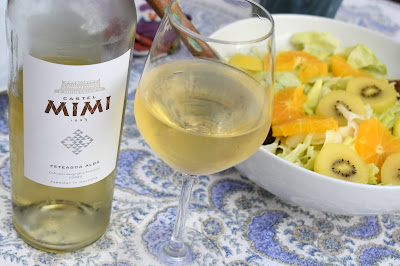 This Feteasca Alba, true to its name, pours a pale - almost white - wine with flecks of green and gold. Fresh garden aromas lean towards citrus and herbs with notes of lemon zest and rosemary. But on the palate the wine is decidedly softer than its scent. I detected more summer stone fruit with a subtle acidity. 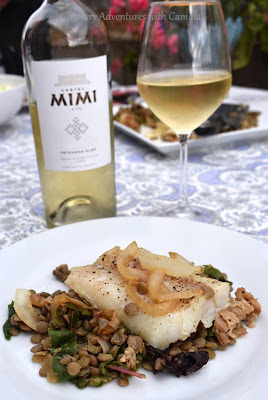 With this wine, I opted for a less than traditional pairing. I started with a summer salad dotted with golden kiwis and fresh citrus. And followed it up with poached fish on a bed of lentils, topped with softened onions. 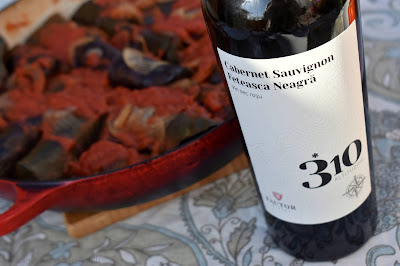 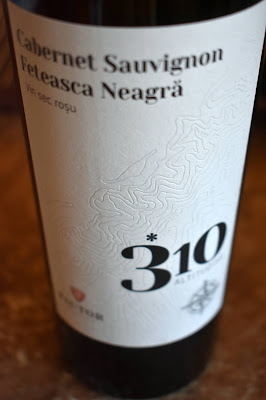 The bottle told us that the Fautor Winery sits at one of the highest points in southern Moldova, in the Valul-lui-Traian wine region. The topographical map on the label was pretty cool, especially for my map-loving crew. 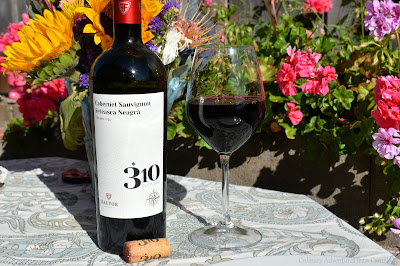 In the glass, it poured a deep shade of red pomegranate. Aromas of black cherry and a hint of mint were detectable. And on the palate I got cherry with intense flavors of coffee and black pepper as well. This was a rich wine with nicely structured tannins. 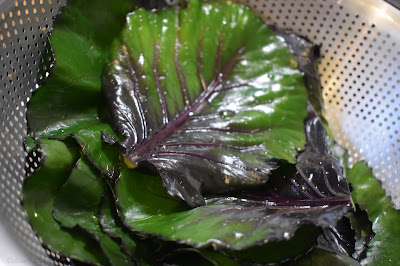 Since I did a non-traditional pairing with the Feteasca Alba, I decided to revisit our Moldovan cabbage rolls. Besides, I can never resist using vegetables from D's garden and these cabbage leaves were ripe and ready! Okay, they aren't the traditional green cabbages, but they are homegrown and were perfect for this summer supper. 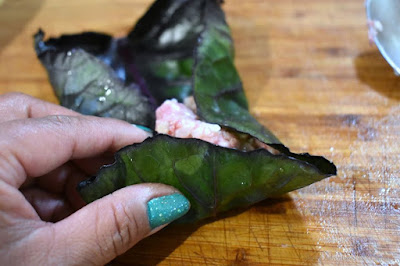 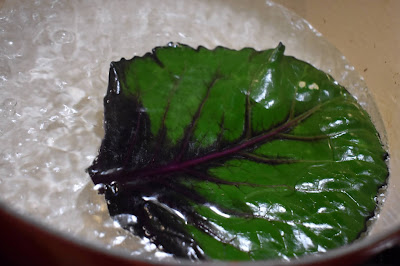 Heat a glug of olive oil in a large, flat-bottom pan. Add the diced onions and cook until softened.

In a medium mixing bowl, place the ground meats, egg, salt, pepper, paprika, and rice; mix until well-combined. I use my hands, but you can use a wooden spoon.

Stir together 1 cup of the tomato sauce and water or water and wine.  And add it to the onion mixture. Add a glug of olive oil and begin to warm the sauce. 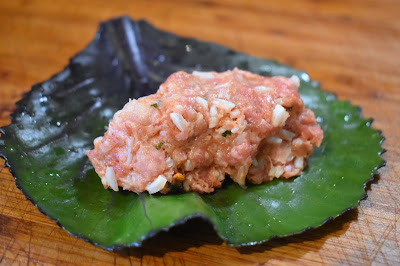 After you blanch and drain your cabbage leaves, place a leaf flat on a cutting board or other clean workspace. Spoon 2 Tablespoons of the filling onto the leaf, near the top. Fold the sides of the leaf in and roll as rightly as you can until you get to the stem. Place the rolls, stem side down, into the tomato sauce. Make as many as you can to fill the pot. 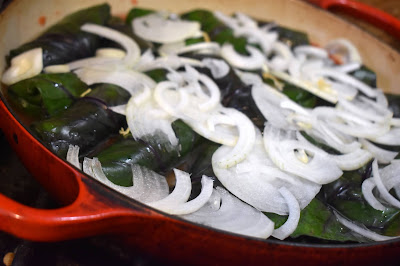 Scatter the sliced onions over the rolls, then spoon the remaining tomato sauce over the rolls. Pour in enough water so that the rolls are about two-thirds of the way submerged. Bring the liquid to a boil, then reduce the heat to a simmer and cover the pot. 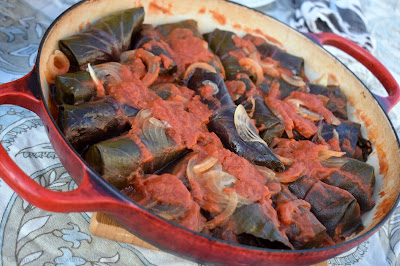 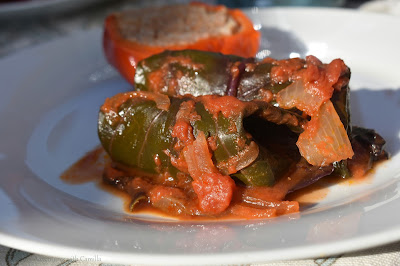 Serve hot. I also served Moldovan stuffed peppers along with a salad. The recipe for the peppers will be posting later. Well, that's a wrap for the #WinePW Moldova event. Many thanks to Jeff for organizing and for Wine of Moldova for sending samples. I don't know if I would have been able to track down Moldovan wines otherwise. But, after this, I will definitely keep an eye out for wine from Moldova, especially any of these maiden grapes. They were delicious. Cheers.