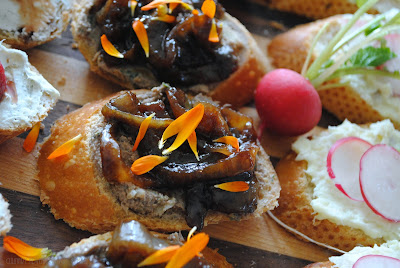 Murder in the South of France by Susan Kiernan-Lewis* was the first in a series about character Maggie Newberry, an American who heads to France to identify the body of her sister who has purported died from a drug overdose. I blazed through this one in a couple of hours and jumped right in to the second book Murder à la Carte, actually preferring the second to the first. However, after reading these two, I think I'm done with the chick-lit mystery genre for awhile.

On the Page
As I already mentioned Maggie heads to France to identify the body of her sister only to discover that she also has a niece about whom no one knew. Maggie makes some rather unbelievable choices and decisions, especially regarding Laurent. The Newberrys seems oddly detached from the death of their daughter Elise even though they end up taking custody of the granddaughter. And the authorities were written as uncaring and incompetent. I think the only thing that kept me flipping pages: I wanted to know whodunit!

All in all it wasn't a bad book. It just wasn't a great book. Though this was interesting enough for me to read the second in the series, that'll be all the Maggie Newberry books for me...for now. 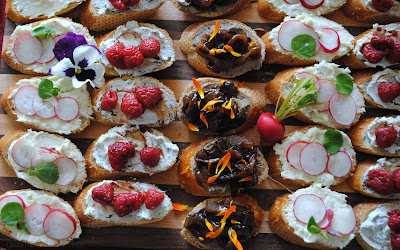 Being set in France, there is plenty of food. Maybe that kept me reading, too!

I was initially inspired by this passage: "Tiny sardines fried in batter, miniature onions swimming in a spicy tomato sauce, raw carrots, artichoke hearts, radishes and, of course, the ubiquitous saucers of oil-drenched peppers and bread. And since no snack, let alone a meal, was worth eating without du vin, there was a steadily breathing bottle of Châteauneuf-du-Pape to wash it all down with. Maggie wondered how long it would be before she started craving a cigarette and spending her mornings hanging around cafés, doing nothing but drinking espresso and watching the world go by. She dipped a crust of bread into the trail of olive oil on her plate" (pg. 129).

And this one: "She stood up and went to the kitchen where Laurent was shaving big curls of Parmesan cheese onto a plated omelet. She set her wine glass down and sat down. The omelets were golden brown speckled with glistening flakes of sea salt. A platter of perfectly steamed asparagus coated in Hollandaise was already on the table as was a baguette of bread" (pp. 144-145).

But pâté got a few mentions and I liked her description of letting "the colorful striped awnings and tents of the city’s marketplace spin by. Her eyes caught a crazy-quilt of color—flowers, asparagus, strawberries, bananas, hanging sausages..." (pg.24). I was inspired to make a crazy-quilt of color with some chicken liver pâté and other topped toasts, including ricotta and radishes and goronzola cream with raspberries. 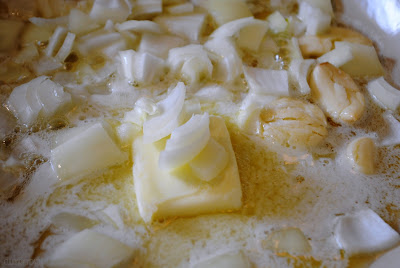 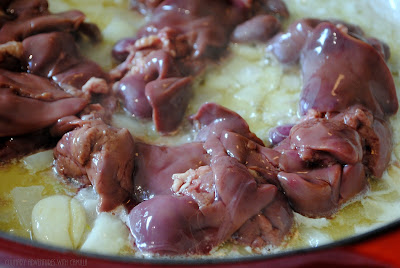 Pâté
Melt 4 Tablespoons butter in a large, flat-bottom pan. When it starts to foam, add in the onions, leeks, and garlic. Cook until the onions soften and are translucent.

Add in the chicken livers, thyme, parsley, and bay leaves. Cook for 6 to 7 minutes, until the livers are completely cooked. Pour in the brandy and vinegar. Cook for another 2 minutes. Season with freshly ground pepper and remove the bay leaves.

Spoon everything into the bowl of a food processor and process until smooth. Scoop the pâté into ramekins or low mason jars. Melt the remaining 3 Tablespoons butter and pour over the pâté to prevent oxidation. 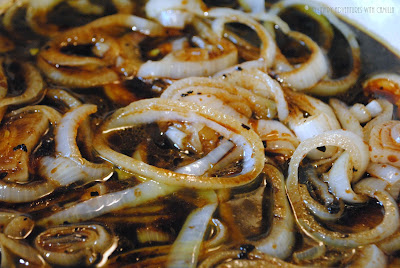 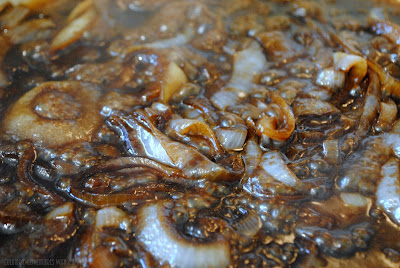 Pour in the balsamic vinegar and allow to reduce until it's thick and syrupy, approximately another 25 minutes. Remove from the heat and let cool.

To Serve
Spread pâté on slices of toasted baguette. Top with balsamicy onions and sprinkle with calendula petals, if using. Serve immediately.