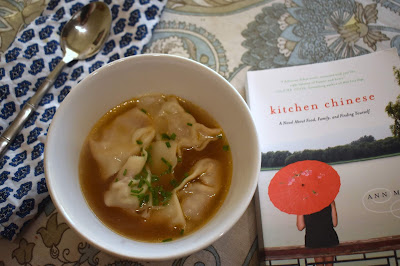 Here we are the June-July 2020 edition of Cook the Books. Claudia of Honey from Rock picked Kitchen Chinese: A Novel About Food, Family, and Finding Yourself by Ann Mah.* You can read her invitation: here. 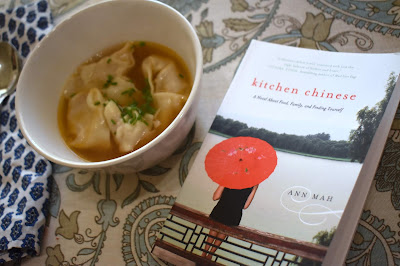 While being annoyingly predictable and about one hundred pages too long, this novel - that is firmly rooted in the chick-lit genre - was a breezy read and an enjoyable way to spend an afternoon. The title, Kitchen Chinese, refers to Isabelle's characterization of her fluency in Chinese: Just basic conversation, she explained to her friends. "Simple words I picked up in the kitchen, spending time with my mom. I hardly have the Chinese vocabulary to work as a journalist" (pg. 9).

Isabelle ‘Iz’ Lee is of Chinese origin, but she is an American. After being fired from her job in New York for doing a shoddy job at fact-checking a story, Iz ends up moving to Beijing to live with her older sister, Claire, who is a successful attorney there.

The two women hardly know each other. "My sister and I are six years apart, but there is a greater gap between us. As children, we were allies against a steady stream of dried black mushrooms and crunchy wood eat fungi, thousand-year-old-eggs that wobbled like jelly and endless, countless bowls of white rice. ...For my sister and me, both born with a second-generation horror of being different, nightly Chinese feasts assured a craving for Taco Bell and tuna noodle casserole, or anything that our friends wouldn't think of as weird. It was one of the few things we ever agreed upon. Once we grew up to have kitchens of our own, we banished bok choy and chicken feet from our diet" (pg 25).

Iz lands a position at a small English-language magazine for the expat community, Beijing NOW, as a food critic. And, at the first meal, she has an epiphany about her identity, "I stand by an empty table, awkward and unsure. For the first time, I realize how difficult it will be to live in China, a foreigner by nature with the appearance of a local" (pg. 42). Eventually, her standard explanation becomes "I'm Chinese but I have an American passport" (pg. 63).

Things I didn't enjoy: the romantic storylines. I know this is chick lit, but even for its genre, the relationship between Iz and her pop-star faux beau Jeff was shallow and unbelievable, the one between Iz and diplomat Charlie was unlikely and unsatisfying. I mean, it might have been interesting if the conclusion were even slightly probable.

Things I did enjoy: seeing Iz adapt to life in China, including the convoluted identity crisis of a Chinese-American living in China; the relationship between Iz and Claire because siblings are complicated; the food - I found myself running to my computer to search for recipes she had just mentioned; and the writing. Mah has a delightful way with words and her prose moves at an easy, constant pace.

Based on the writing alone, I enjoyed the book. But it had a lot more potential that Mah squanders. 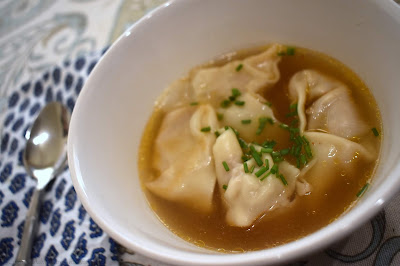 Because Iz is a food critic, there is no dearth of food in the book. The first paragraph of the novel has her eating kaoya, roasted duck. "Glossy and brown, with crisp skin and meltingly moist flesh, the bird is cut into over one hundred pieces, in the traditional way. We silently fill our pancakes, dipping meat and skin into the dark, salty-sweet sauce, adding slivers of scallion and cucumber, and rolling the packages up like cigars" (pg. 3).

We read about street food when she encounters jianbing, a crepe from Tianjin. "I admire the artful twist of his wrist as he spreads the batter into a large, paper-thin crepe, the flick of his spatula as he turns it over, the meditative sprinkle of sesame seeds" (pg. 63).

Claire's story about guo qiao mixian, crossing the bridge noodles, embodies a wife's unebbing dedication to her husband. "According to legend, in ancient times, a scholar was so desperate to pass the imperial exams, he isolated himself on an island to study. Every day his wife would cross the bridge to bring him a bowl of noodles. But the journey from the kitchen to the island was too long and his lunch kept getting cold. The wife was so devoted to her husband, she finally devised a way to keep the noodles hot during her walk. She poured a thin layer of smoking oil on top to seal in the heat. ...'Can you imagine being so dedicated to your husband you'd invent a new dish for him?'" the sisters joke. (pg. 283).

But I was mostly inspired by Iz's disastrous dinner (date) with Dwayne, Claire, and Dwayne's mom at Empress Impressions, "'Oh, we eat everything,' says Mrs. Keeg breezily. 'Except shellfish. Dwayne's allergic. Or peanuts. I'm allergic. That goes for peanut oil too. I just blow up like a balloon! And no MSG" (pg. 163). Iz orders an impressive feast of cold chicken in sesame sauce, cabbage in mustard sauce, flat mung bean noodles tossed with cilantro and shredded pork, pan-fried cod fillets with chili Mandarin sauce, and more.

"'Did you order any dumplings?' asks Dwayne, licking his thin lips."

So, I realize that jiaozi are pan-fried dumplings, but I decided to make an easy dumpling soup. Dumplings are simply pieces of dough wrapped around a filling; I figured that wontons fit the bill. These are filled with spiced pork and the soup is topped with chives. 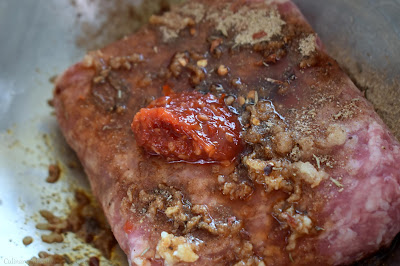 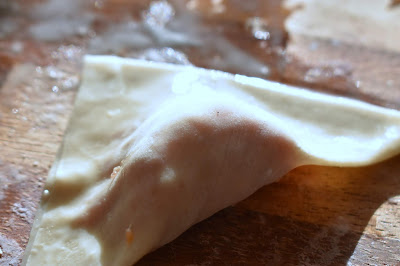 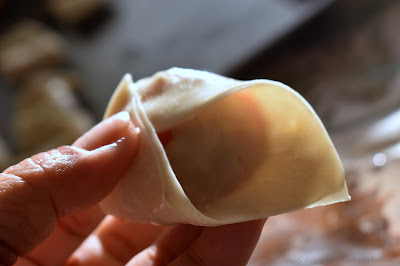 Place a wonton wrapper flat and spoon 1-1/2 t of filling into the center. Dip your finger into the water and moisten the edge of the wrapper. Fold wonton in half diagonally to create a triangle. Press the edges gently to seal. Then, bring the two lower corners together and press to seal. Repeat until all of the wrappers are filled.

Soup
Bring all soup ingredients to a boil in a souppot. Reduce heat to a simmer and let the soup cook until the wontons are ready.

In another pot, preferably one with a built-in colander, bring water to boil for cooking the wontons. Lower the wontons into the water and cook for 10 minutes. Do this in batches, depending on the size of your pot. 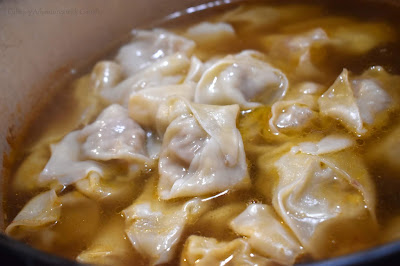 Once the wontons are cooked, drop them into the soup broth. To serve, place four or five wontons into an individual serving bowl. Ladle broth over the wontons. Garnish with snipped chives. Serve immediately.

Click to see what everyone else read in June 2020: here.