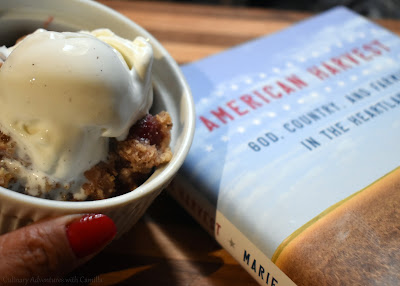 Denise and Angie suggested American Harvest: God, Country, and Farming in the Heartland by Marie Mutsuki Mockett* for our Lit Happens book group. It seemed very timely in this topsy turvey world as Mockett pursues her roots and asks questions about faith, farming, and identity. While this is not a cook-from-the-book group, I am almost always inspired into the kitchen in whatever I'm reading or watching. This was no exception. 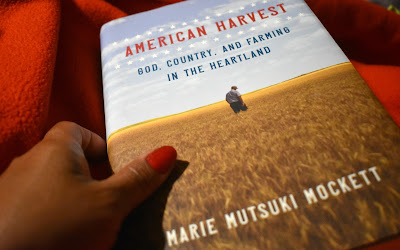 American Harvest is one of the books that I took out to the back patio one weekend. And between cooking and serving breakfast, lunch, and dinner to my hungry family, I dug into this book for several hours at a stretch. By the time the next meal came around, I had more discussion prompts for my teens and my husband. And because I spend a lot of time reading, thinking, writing about, and discussing our food system, my trio didn't even bat an eyelash. They just, gamely, answered my questions. 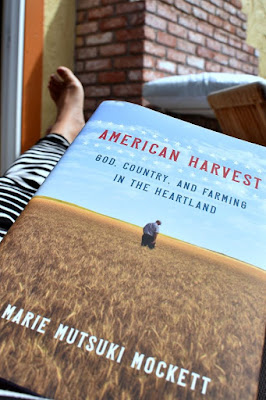 In American Harvest, Mockett documents her journey with an evangelical crew as they move through America's heartland harvesting wheat from Texas to Idaho. California-born Mockett is the product of a Japanese mother and Midwestern father whose family has owned a Nebraska wheat farm for generations. When her father dies in 2008, she inherits the farm and has a renewed interest in the operation. So, she spends a season with a harvesting crew that is completely white, virtually all male, and almost entirely made up of devout members of the Anabaptist faith. She, as a mix - Japanese and white -, a woman, and a non-Christian, is an obvious outsider.

But she aims to engage the crew in earnest conversations. One of her initial questions exposes that divide. She asked, "Is the farm organic?" That's a fairly innocuous question and a typical one for "city folk" who are interested in their food sources. When she takes Eric and Emily to Whole Foods in New York, "Eric waded through the store with his thumbs tucked into his belt loops. He moved half as fast as everyone else. I watched him examine carrots, pumpkins, and squash with patience and purpose. If a subterranean disaster had befallen us, he could have held up the building on his shoulders. Atlas-like. Together we navigated sunflower oil, bulgur, and dairy products, and he occasionally offered up a comment or asked a question in his low, measured cadence. After twenty minutes, grim determination had taken over Eric's face. 'Marie,' he said, slow and deliberate. 'This thing about organic. I want you to understand. It is marketing. Do not fall for it. You know what farming is and how it works. Do not fall for these labels'" (pg. 23).

As time goes on and her comfort level grows, she begins to ask questions that meld the nuances of farming with Christian belief systems. These were the most intriguing to me: Why are evangelicals who believe in creationism okay with genetically modified crops? Isn't that akin to playing God??

Digging further into belief systems about food, Mockett looks at how people refer to monoculture pejoratively. "The implication is that a farmer in Nebraska grows only wheat because he lacks the creativity of the farmer in California who can grow a dwarf strawberry. The negative implications of monoculture always make me a little bit sad. ...Here and there on the plains, farmers do attempt to grow produce, as I saw in Oklahoma. But in general, the growing season - the weather - is so different in the country's interior that it isn't suited for large-scale production of carrots and lettuce. There is a reason why California became the 'salad bowl' of the United States" (pg 206).

While I enjoyed the book, it didn't resonate with me as much as Dan Barber's The Third Plate or Michael Pollan's The Omnivore's Dilemma. With those two books, I bought extra copies because I wanted to make sure that friends read them. I think it's because Mockett is still grappling with her conclusions that I am not compelled to share hers. "It doesn't take too long after I'm home for me to pause in the grocery store. Should I buy organic? Maybe I am completely wrong to defend the modern system of farming in any way. Maybe if I didn't own land, then my own confirmation bias would not seek the science that defends how we warm. Maybe I would become a consumer of organic food only. And this feeling of being split - a feeling I know so well - annoys me" (pg. 368).

It's well-researched, well-written, and reflective. But it's also about a hundred pages too long and Mockett seems oddly apologetic for her own beliefs. 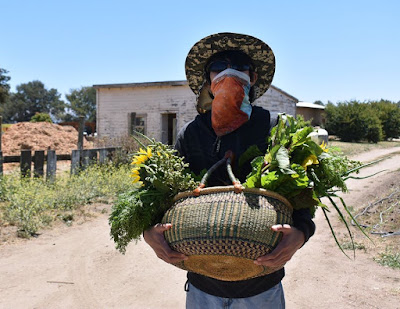 I know - and am friends with -  many small organic farmers here on California's central coast. And I do support them and believe that theirs is the way to farm. My Enthusiastic Kitchen Elf is working on an organic farm this summer; and I visited one Saturday and helped to pull weeds. While I aerated the soil and overturned the weeds around the red cabbage seedlings, I took a deep breath and recognized that my experience as a food consumer in California is different than in other parts of this country. I am lucky and I don't see the need to apologize for that. 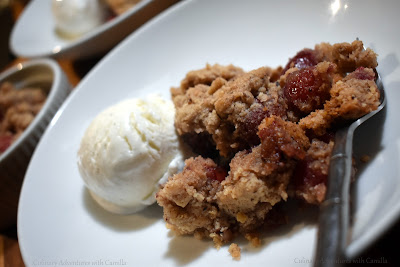 Early in the book, Mockett writes,"Dinner is a large affair - so many people at the table. ...There will always be dessert. There is no alcohol and will be no alcohol all summer. The crews often come from families that have Old World habits, which involve saving water and avoiding baths, and so, in addition to the no-alcohol rule, Eric and Emily insist that their crew must shower" (pg. 30).

Always dessert? My boys can get behind that. So when one of my best friends dropped off cherries picked from their trees, I knew I wanted to make a cherry cobbler. "At dinner Eric is restless. By seven the sun is speeding toward the horizon and he wants to go for a drive. Evening light is short and magical and we should see it before it fades. But we don't go out until Eric has had his dessert - cherry cobbler that night. It is a favorite, and so good that Eric has an extra helping" (pg. 43). 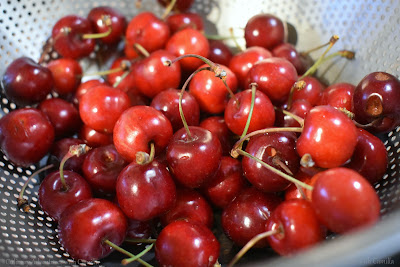 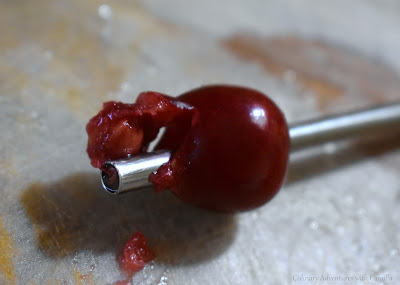 Filling
Preheat oven to 350 degrees Fahrenheit and butter a baking dish. Pit your cherries; if you don't have a pitter, you can pit them easily with a metal straw. Read my HOW-TO: Pit a Cherry Without a Cherry-Pitter.

Toss all of the ingredients together - except for the butter - until the cherries are evenly covered with the flour and sugar. Spoon the filling into the prepared pan and dot with 2 T butter that's been cubed.

Topping
Stir until all the ingredients are combined. The consistency will be like a crumble top. Spoon the topping over the fruit and use a spatula to spread it to the edges as much as possible.

Place the cobbler in the oven and bake the cobbler for 40-50 minutes. The topping should be golden brown and the filling bubbly. Let cool for 5 minutes before serving. Serve hot with ice cream on the side!

Click to see what everyone else read in June 2020: here.