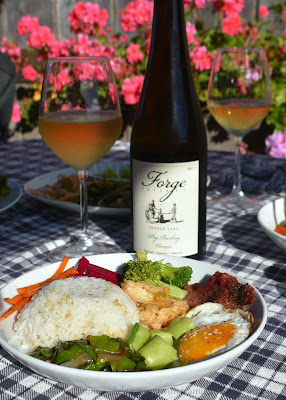 This month, the Wine Pairing Weekend bloggers are looking at the wines from New York's Finger Lakes region with Linda of My Full Wine Glass for hosting. You can read her invitation: here.

Though I did receive some sample wines from a Finger Lakes winery, my shipment arrived just the day before our scheduled posting date; so, the turnaround was too tight for me do a pairing dinner. Thankfully, I had been able to locate a couple of different wines on my own. But keep an eye out for a post featuring wines from Buttonwood Grove Winery soon.

In the meantime, all of these posts will go live between Friday, June 12th and early morning on Saturday, June 13th. If you are seeing this early enough, feel free to join the live Twitter chat. We'll be on at 8am Pacific time. Follow the hasthtag #WinePW and be sure to add that to anything you tweet so we can see it. 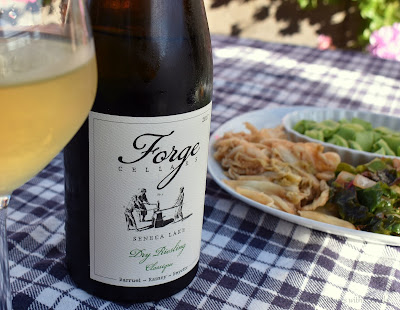 One of the bottles I found on my own was a 2017 Forge Cellars Classique Riesling. The Finger Lakes region is completely new to me. So, I was excited to do some research.

The four main lakes of the Finger Lakes AVA include Canandiauga, Keuka, Seneca, and Cayuga Lakes. Additionally, the last two in that list are recognized as official AVA regions on their own. This wine-producing region accounts for ninety percent of all the wine produced in the state of New York. And the area can trace its wine-making roots back to the early 19th century.

Similar to classic Riesling regions of Europe - specifically Germany and Austria - the Finger Lakes area was created by the movement of glaciers during the Ice Age. And the narrow, deep lakes create a microclimate that is conducive to the vineyard cultivation. The steep slopes of the lakes offer a natural drainage for rain during the growing season while the depth of the lakes allow fog to blanket the grapes and extend the growing season. Though Rieslings have fueled much of the region's renown, Pinot Noir and Cabernet France are also gaining a foothold in the area. 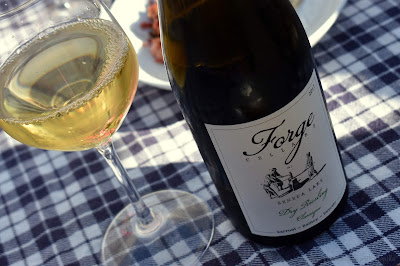 This wine was whole cluster-pressed before being fermented with indigenous yeasts for eight months. It poured a bright straw color. On the nose I got a delightful mix of citrus and stonefruits while on the tongue there was a pronounced spice and salinity that lends the wine a crisp freshness. Plus with a suggested retail price (from Wine.com) of just under $18, this can be a weekday pour! 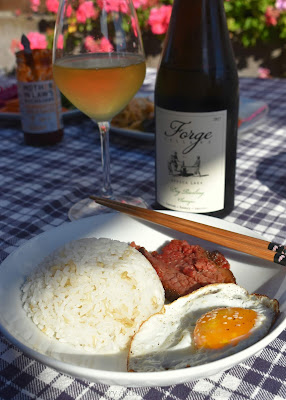 A few weeks ago, I had been messaging with a friend who is an administrator at the boys' K-8 school. She and I were tossing around the idea of a virtual dinner party - since we are still on shelter-in-place orders here on California's central coast. We toyed with cooking and eating bibimbap in our respective households. And she even shared her family's recipes with me. She had mentioned that bibimbap paired well with a dry Riesling, so I knew exactly what I wanted to make it for this event. Susie and I never did get around to that dinner party by Zoom. One of these days... 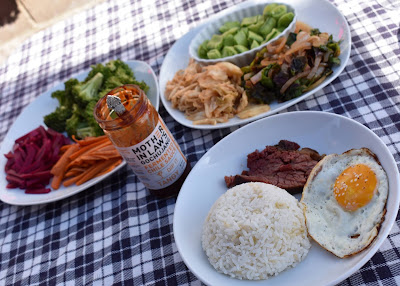 There really is no recipe for bibimbap. Susie wrote: "It's mixed rice with vegetables. Served in a large bowl with shortgrain steamed rice, optional meal, sunny-side-up egg, various seasoned vegetables of your choosing (nameul), drizzled with sesame oil, and seasoned gochujang." She pointed me to a local Korean grocery store and wrote, "Most of the vegetables (nameul) can be made ahead of time and are usually in refrigerators of Korean homes. So if you’re making this all in one day, it can be very time consuming. I usually have 1 or 2 of the prepared vegetables already made and just cook up a couple more. I also always have seasoned gochujang in the fridge. Since it's a great way to eat lots of veggies and get our Korean food fix, we eat it every week. My version is rice, egg, gochujang, sesame oil, and 2-3 of any veggies I have and meat if we have it." Sounded easy enough! 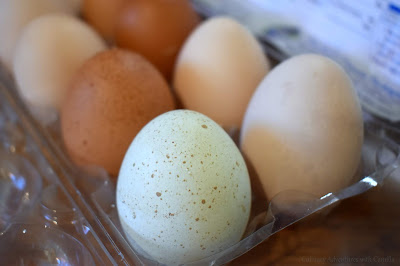 I am a firm believer that if you cook with the best ingredients you can source, everything tastes better! So, I used eggs from a friend's hen. 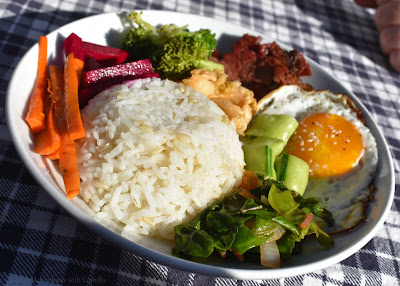 And my husband and our younger son grew the cabbage, peas, chard, carrots, beets, and broccoli that I used in this bowl. That's why I decided to call it 'garden banchan'; most of the vegetables came from their garden. As I mentioned, bibimbap doesn't have a set recipe. Make as many or as few of these veggie side dishes as you like. 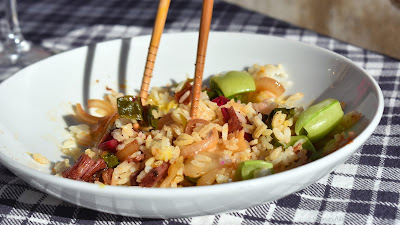 Susie wrote instructions out: "Place rice in each bowl and add a little meat, the egg, and each vegetable on top. Serve with sesame oil and seasoned gochujang and allow everyone to drizzle their own to taste. And of course, serve with kimchi." That's it! Mix it all together and call it delicious!

The greens, broccoli, and carrots can be done the same day. I suggest making the kimchi a week ahead and the pickled beets and turnips at least three days ahead. I marinate the beef the day ahead and cook right before serving. It's my version of bulgogi. 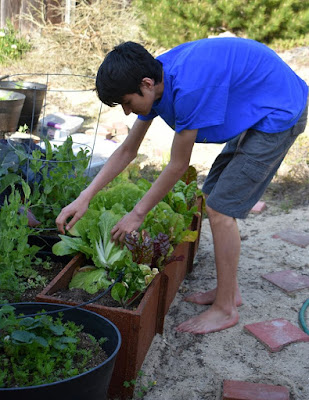 This is the recipe for my Purple Napa Cabbage Kimchi. Same process, different greens. For this batch, I used D's green Napa Cabbage...at least that's what he told me it was. It didn't look like a Napa Cabbage to me. But I'm not going to argue with the gardener! 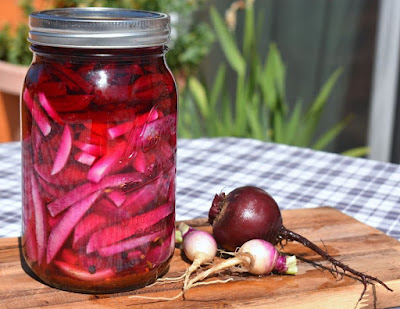 Put your veggies in a large mixing bowl and sprinkle them with 1 teaspoon salt. Toss to coat and set aside.

Add the vinegars, sugar, and 1 teaspoon salt to a small saucepan. Bring to a boil, then reduce to a simmer. Swirl and stir until the sugar is dissolved. Remove pan from heat, stir in garlic. Let the brine cool.

Rinse and drain the sliced veggies and place them in a jar, cover them with the brine and refrigerate for at least three days before eating them. 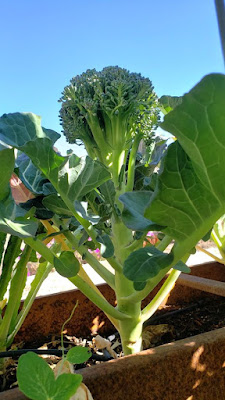 
Bring a large pot of water to a boil. Add a teaspoon of salt and the broccoli. Blanch for 1 to 2 minutes - just until it reaches the desired tenderness. I usually lean towards the less done. Drain, and immediately shock in cold water to stop cooking. Drain well.


Combine the broccoli with the remaining ingredients, and toss well to evenly distribute the seasoning. Let stand for at least 30 minutes before serving. You can also refrigerate this and serve at a later time. 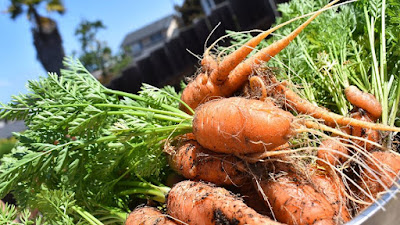 Peel and slice carrots into 2" long batons. Bring a large pot of water to a boil. Add a teaspoon of salt and carrots. Blanch for 1 to 2 minutes - just until they reach the desired tenderness. I usually lean towards the less done. Drain, and immediately shock in cold water to stop cooking. Drain well.


Combine the carrots with the remaining ingredients, and toss well to evenly distribute the seasoning. Let stand for at least 30 minutes before serving. You can also refrigerate this and serve at a later time.

Seasoned Greens
(this is often made with spinach; I used the homegrown chard we had) 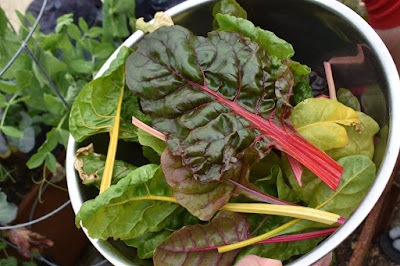 Rinse the greens and slice into 1" pieces. Blanch the greens in simmering water until wilted, approximately 20 to 30 seconds. Quickly remove the greens from the pot and shock in icy cold water to stop the cooking. Drain and gently squeeze out excess water.

Add the remaining ingredients to a small mixing bowl, then add in the greens. Massage everything together until well coated. Let stand for at least 20 minutes before serving. You can also refrigerate this and serve at a later time. 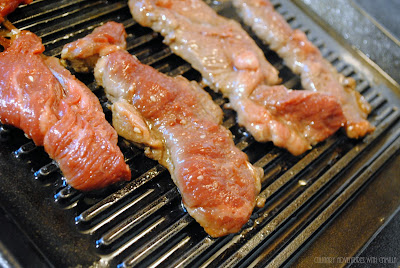 Whisk together all of the ingredients for the marinade. Place the meat in a container (I used a flat, lidded glass container) and pour the sauce over the top. Hopefully the meat is completely submerged. If not, you'll need to turn the meat every couple of hours. Cover and refrigerate overnight or for, at least, 4 hours.

To cook, heat a grill - or grill pan on the stove - and swab with peanut oil so the meat doesn't stick. Cook the meat on high heat for 4 to 5 minutes per side, until meat is browned. Serve hot.

Susie's Seasoned Gochujang
Whisk this all together and set aside.

That's a wrap for the June 2020 Finger Lakes wine pairing event. I will be sharing posts about more Finger Lakes wines in the near future as I pour and play with the wine samples I am scheduled to receive. And the #WinePW bloggers will return in August with a focus on wines of Moldova with Jeff of Food Wine Click! at the lead. Stay tuned.