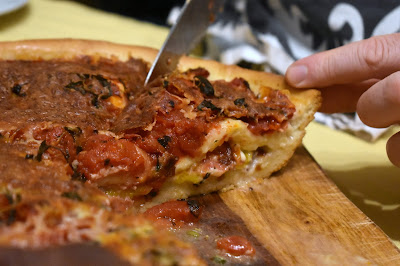 For special occasions, they get to make requests. So, for R's graduation at the end of May, he asked for "pizza like Zachary's...and dark chocolate crème brûlée." Zachary's Chicago Pizza was one of the stops on the Rockridge Food Tour we did several years ago. I hadn't been there since I graduated from Cal in 1996; and I certainly don't remember taking him there more than once after that. But apparently it was emblazoned in his memory and he wanted it after we got home from the socially-distanced graduation at Laguna Seca. This year's graduation meant being masked, gloved, and mostly in the car except for the brief moments it took for him to cross the stage. 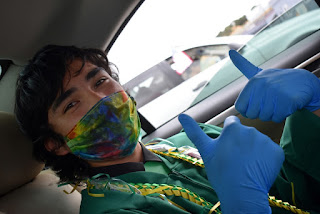 Jake was pretty excited about getting to take that victory lap on the world renowned WeatherTech Raceway. We were just behind the pace car for the round. R and I were happily belted in the back. D may have screeched a little as we went through the corkscrew. Ha. 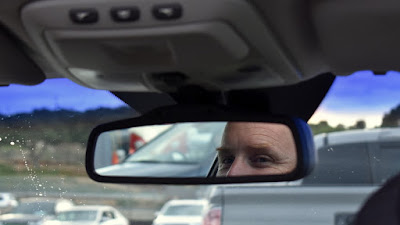 This wasn't exactly the celebration we envisioned. However, it was definitely one of the history books! And R was a good sport. 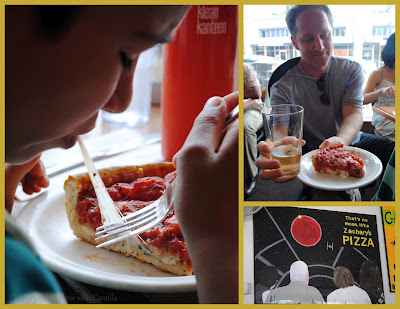 But it wasn't until this culinary adventure that I realized Zachary's is not a 'thick' crust pizza. It's basically two thin crusts with a bunch of deliciousness in between. D characterized it pretty well: It's like a lasagna but with pizza dough. 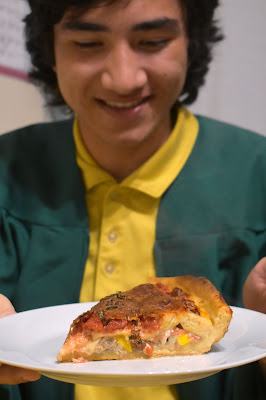 Our graduate was thrilled with this pizza! As I floundered with where to begin, when he first requested it, I found a recipe on Epicurious, one on America's Test Kitchen, and one that was supposedly submitted by Zachary's in answer to a reader's question in the Los Angeles Times back in 1999. But I find it hard to believe that Zachary's uses volume measurements versus weight, so I am dubious about that one. Still I used those three recipes as reference and created my own version. And I will definitely be making it again soon. 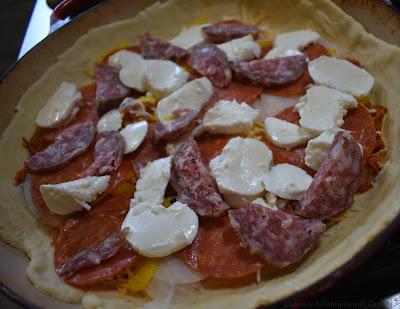 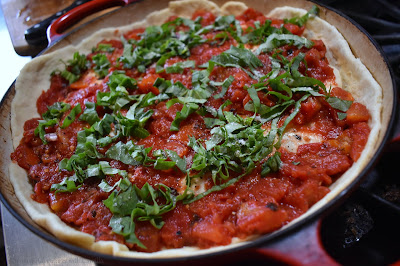 Pour warm water into a large mixing bowl. Stir in the sugar and water. Add the yeast and let it float on top. Let bloom for 10 minutes. It should be foamy. Add in the flour. Use a mixer until the dough has formed a ball around the beaters. Scrape the dough into a bowl and pour in the olive oil. Knead until the dough is smooth and elastic. Place the dough into an oiled bowl and cover with a kitchen towel. Allow dough to rise until doubled in size. This could happen in as little as 90 minutes; we left ours for about 4 hours since that was the duration of the graduation ceremony. But the second time I made this, 2 hours was sufficient.

Preheat oven to 475 degrees Fahrenheit. Butter your baking dish. As I mentioned, I used an enameled cast iron pan. Sprinkle corn meal over the bottom. You may not need the full 2 teaspoons to cover the bottom of your pan.

Lay a piece of parchement paper on the counter. Use a rolling pin to press the larger of the two dough balls into a circle that's approximately 1/8" to 1/4" thick. For a 10" pizza, you'll need a circle that's at least 14" in diameter. Transfer the rolled-out pizza dough to line the prepared pan.

Spread the ground Italian sausage in a thin layer on top of the pizza crust in the pan. Cover the sausage with one layer of sliced provolone. Add in the sliced bell peppers and onions. Arrange the pepperoni, salami, and fresh mozzarella into layers. Sprinkle 3/4 cup shredded parmesan cheese over the pie. The pan should be about halfway full at this point.

Roll the second dough ball as thin as you can get it and transfer that on top of the parmesan layer. Stretch the dough the the edge of the pan, then slice several vents into the dough. Sprinkle 3/4 cup parmesan over the dough. And lay the final slices of provolone over the parmesan.

Pour the drained diced tomatoes over the second crust. Add the basil. Sprinkle with salt and pepper. Drizzle the tomatoes with olive oil. Drizzle with 2 Tablespoons of the liquid from the canned tomatoes. Finish with the last remaining 1/2 cup of parmesan cheese.

Place in the preheated oven and bake for 38 to 40 minutes. The crust should be firm, nicely browned, and lift out of the pan easily. You may need to return it to the oven if the crust doesn't hold. 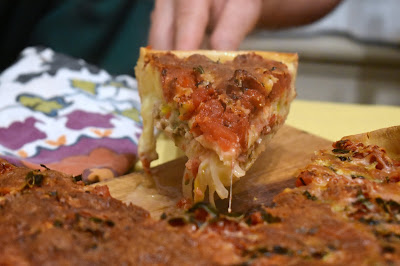 Carefully remove pizza from pan and lift out onto a cutting board. Slice the pizza using a large knife 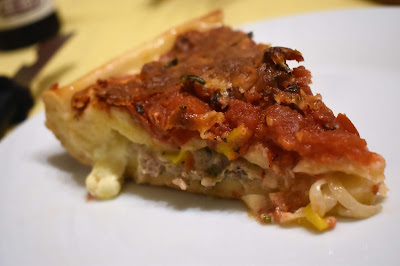 Serve immediately and enjoy! Next time I think I'll add in some mushrooms for the true Zachary's Special.