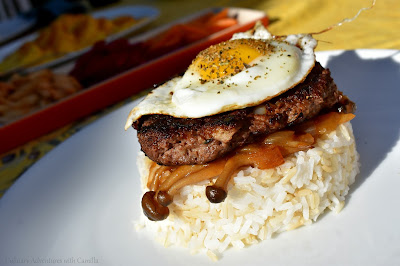 I am hosting June's Food'N'Flix and asked the bloggers to take a virtual trip to Hawaii. You can read my invitation: here. So we've been watching lots and lots of shows that feature Hawaii. I wasn't a huge fan of the original Hawaii Five-O, but I adore the reboot! We streamed it on Netflix the first time we watched it, but just found that it is no longer there, so I ordered the DVDs from Amazon. We started with the first season last week and that inspired my Haupia-Filled Malasadas.
. 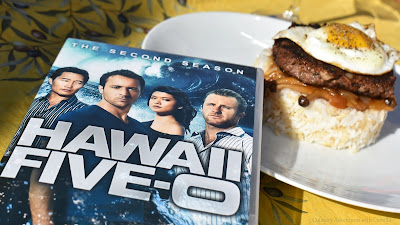 We launched into Season two this week. And it was episode 6 - Ka Hakaka Maika'i (The Good Fight) - that inspired me into the kitchen to make loco moco! While loco moco has been mentioned several times so far in the show, it wasn't until this episode that Steve McGarrett shows up to meet Joe White on the beach with two to-go food containers. "Loco moco from Rainbow Drive In?" White asks. Another character pipes up, "Hope you brought enough for everyone." And McGarrett hands her one of the two boxes. When she, clearly a mainlander, asks about loco moco, White explains: "rice, hamburger, a couple of fried eggs and gravy."

When I posted some preview photos to my social media, several friends chimed in. I was surprised to see how many people I know - who aren't based in Hawaii - love this dish. I have only ever had it in Hawaii, so I didn't anticipate that friends in Alaska and Missouri would be able to get this in their home states!
It was also a little nostalgia-inducing. Kathey wrote that I was making her homesick for Kailua. And Alex commented that he loved plate lunches when he lived in Hawaii.

So, I set out to make my own version...rice, hamburger, fried eggs, and gravy. Can't be too hard, right? 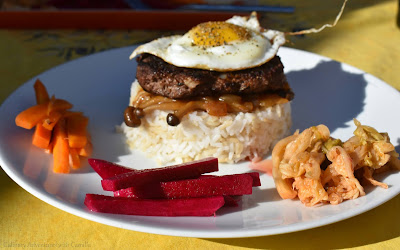 Ingredients
Burgers (I made teriyaki-swabbed burgers) 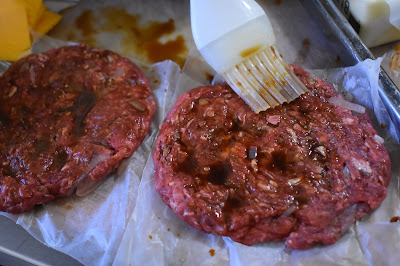 Teriyaki Sauce
Combine all of the ingredients in a saucepan over medium heat. Whisk until smooth. Simmer until desired thickness. Set aside.

Burger
Add all of the ingredients to a large mixing bowl. Mix until well-combined. Form the meat into 4 equal size patties, these were about 6 ounces each. Place on a parchment-lined plate and set aside until ready to cook. Just before cooking, swab one side with teriyaki sauce and place that side don on the grill. Before flipping, swab the burger again so that the newly swabbed side is face down.

Cook, as desired, on a grill or on the stove with  grill pan.

In a skillet, melt 1 Tablespoon butter with a splash of olive oil. Add in the onions and cook over low heat until translucent and beginning to caramelize, approximately 12 to 15 minutes. Stir in the mushrooms and cook until they just begin to soften, approximately 5 minutes. Turn off the heat and set aside. In a small pot melt the remaining 2 Tablespoons butter in a splash of olive oil. Stir in the flour to make a roux. Cook for 1 to 2 minutes. Pour in the stock. Whisk constantly until thickened to a nice gravy consistency. Season to taste with soy sauce. Fold in onions and mushrooms.

For Serving
Scoop rice onto individual sering plates. Spoon gravy over the rice. Position the burger on top of the rice and gravy, then top with a fried egg. Sprinkle with freshly ground black pepper, as desired. Serve immediately with assorted vegetables. 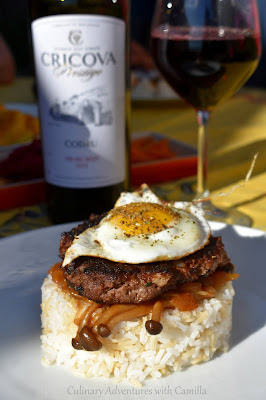