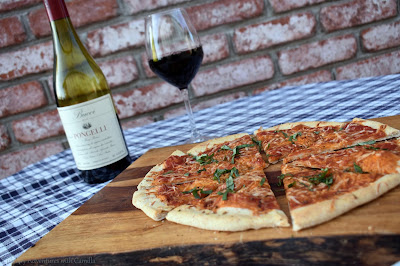 This month the Italian Food Wine Travel bloggers are exploring Sangiovese Around Italy with Wendy of A Day in the Life on the Farm. You can read her invitation here. If you are reading this early enough, feel free to join our live Twitter chat on June 6th at 8am Pacific time. Follow the hashtag #ItalianFWT and be sure to add that to anything you tweet so we can see it. In the meantime, here are the Sangiovese posts; they will be going live between Friday, June 5th and early morning Saturday, June 6th. Cin cin! 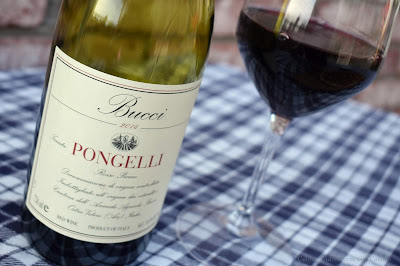 When I think of Sangiovese in Italy, Chianti comes to mind. Then Wendy challenged us to look at the same varietal from different parts of Italy. Or that's how I interpreted her theme when I first read it. But let's take a look at Chianti...

Like most other Old World wines, Chianti derives its name from its region of production and not from the varietal used to make the wine though there are some requirements that it be mostly Sangiovese grapes.

A wide range of wine styles comes from the Chianti region. But from basic Chianti to the finest Riservas, elements of the wines remain consistent.  For a Chianti to be a Chianti, it must be produced in the Chianti region - in Tuscany - and be comprised of at least 80% Sangiovese grapes which typically produces a medium-bodied wine with strong fruit tones that are accented by delicate notes of herbs, leather, and spice, depending on the winemaker.

Traditional grape varietals such as Mammolo, Colorino, and Canaiolo are sometimes blended with the Sangiovese to add some complexity to Chianti. Today, many producers now blend in some Merlot for fruit or Cabernet Sauvignon for richness. Whatever the grape composition, you can expect the wine to be rustic and earthy. And the high tannins make it very food-friendly.

While I could have poured a Chianti for this event, I wanted to try to find a Sangiovese that was made outside of Tuscany. I tracked down a bottle of 2014 Bucci Piceno Pongelli, from the Rosso Piceno appellation in the Marche which lies along the eastern coast of Italy.

Rosso Piceno is the largest DOC (Denominazione di Origine Controllata or Denomination of Controlled Origin) in the Marche with most of the vineyards over 2000 feet in elevation. Rosso Piceno wines must contain between 30% and 60% Sangiovese and between 35% and 70% Montepulciano. Other indigenous red grape varietals can comprise up to 15% of the blend.

The Bucci family has owned vineyards and made wine since the 18th century. In 2002, Ampelio Bucci and enologist Giorgio Grai succeeded in getting the winery officially certified as organic.

Made with Sangiovese and Montepulciano grapes, this wine poured a deep garnet color. With intense fruity aromas, the savory palate was surprising and fresh with light tannins. This wine had a delicious suppleness with a silky texture. 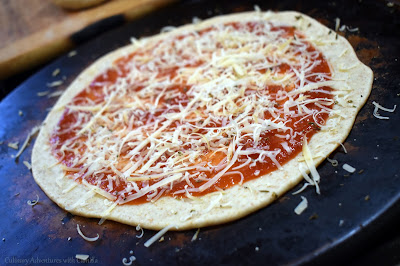 I decided to pour this with a slight twist on a traditional pizza. In the Romagna part of the Emilia-Romagna, the flatbread - piadina - is ubiquitous. It can look like a pizza, as mine does, but there are a few differences to note. Pizza dough is made with yeast; piadina is not leavened. Pizza dough contains no fat; piadina is traditionally tenderized with the addition of lard though I use olive oil.

In a large mixing bowl, whisk together flour, salt, and baking soda with a fork. Mix the oil and water together, then drizzle in and toss with a fork until the dough begins to clump together in a shaggy dough.  Turn the dough out onto a cutting board or counter and knead until smooth. Place in an oiled bowl and let rest for at least 30 minutes.

Divide the dough into six piece and preheat oven to 450 degrees F.

Toppings and Assembly
Roll the dough out into 9" rounds on a pizza stone. Smear tomato sauce over the crust and top on grated parmesan. Sprinkle with salt and pepper as needed and place in the oven. Bake for 12 to 15 minutes. The crust should be browned but will not rise at all.

To Serve
Remove the piadina to a cutting board and slice into wedges. Add fresh basil to the top and serve immediately. For a more traditional piadina-look, keep the rounds whole and just fold in half life a gyro or a taco.