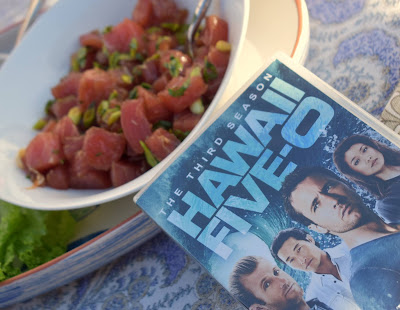 I am hosting June's Food'N'Flix and asked the bloggers to take a virtual trip to Hawaii. You can read my invitation: here. So we've been watching lots and lots of shows that feature Hawaii. I wasn't a huge fan of the original Hawaii Five-O, but I adore the reboot! We streamed it on Netflix the first time we watched it, but just found that it is no longer there, so I ordered the DVDs from Amazon. When we watched the first season, it inspired my Haupia-Filled Malasadas. Season two sent me into the kitchen to serve up my Loco Moco. 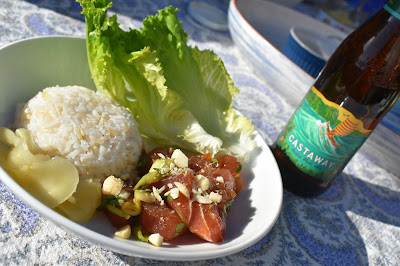 After watching Lana I Ka Moana ("Adrift") - season three, episode three - I couldn't pass up the opportunity to make poke. Steve McGarrett and Danny Williams borrow a boat from Chin Ho Kelly's uncle and head out for a relaxing day of fishing. One of my favorite things about this series is the jovial repartee between those two characters. Liken them to an old married couple: they know exactly which buttons to push for a reaction, but genuinely care for one another.

When discussing their goal for the day...
Danny Williams: There's no goal, there's no mission. We are just fishing. What that means is, we relax, we have a couple of laughs. Maybe we catch a fish, maybe we do not.
Steve McGarrett: All right, well, this right here-- this is called sitting on a boat and not catching anything, just so you know.
Danny: Fine, okay, well, that's where the beer comes in. Few laughs, pretend we're friends. Right?

When trying to get to the bottom of Danny's ocean-phobia...
Steve: Hey, it's water, Danny. It's just water.
Danny: With tiger sharks and riptides and all kinds of other stuff to make you dead. Not everybody's a Navy SEAL, Steve!
Steve: Seriously, Danny, what is your problem with the ocean? Huh? I mean, who hates water? Sixty percent of the human body is water!
Danny: Well, that explains why I hate people, all right? You are at the top of my list.
Steve: Yeah, right now, I'm thinking that shark would be better company.
Danny: Then go. Then go swimming with the tiger shark. But do me a favor. If he comes near you, punch him. I do not want to be the one to tell your sister you ended up man sushi.

When they are stranded on a leaking dinghy after being boat-jacked...
Steve: Right now we take a break, we wait.
Danny: Wait, wait for what?
Steve: For the huge tiger shark to go away, Danny. Then we stick to the plan.
Danny: Trust me, it's going to be a long wait.
Steve: What, you're a shark expert now?
Danny: No, I am an expert on McGarrett, the danger magnet.
Steve: Oh, this is my fault?
Danny: Who else on the planet Earth could turn a nice, relaxing day of fishing into a boatjacking and a shark encounter?

So, after the boat-jacking, and after finding a dead body, the team reunites back on land. Then they solve the murder and catch the bad guy. It's not a spoiler, really, that's the formula, right?! At the end of the episode, the team gathers at Kamekona's to eat the tuna that Danny caught. Kamekona places a platter of poke on the table and hands Danny a bill.

Danny: What is this?
Kamekona: It's a bill.
Danny: I see that it's a bill, but why are you giving it to me? I brought you a fish what are you charging me for?
Kamekona: My cooking services.
Danny: Oh, cooking what? What'd you cook? It's raw fish. You didn't cook anything.
Kamekona: Superior knife skills.
Danny: ...like a corkage fee?
Kamekona: Exactly. All right, you brought me fish, I gave you a meal. 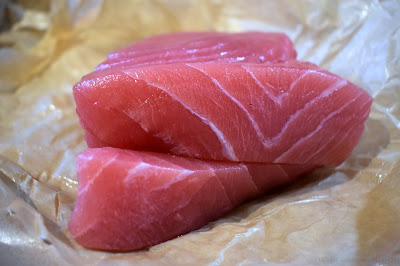 This is my take on a traditional Hawaiian ahi poke bowl recipe made with sashimi-grade ahi tuna, sweet onions, soy sauce, sesame oil, and chopped macadamia nuts. I served it with lettuce cups and Kona Brewing Company beer. HipaHipa! 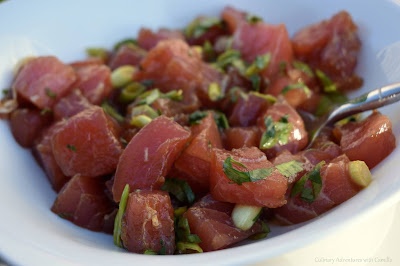 In a bowl, combine the cubed ahi, soy sauce, sesame oil, and green onions. Gently toss with a spoon. Adjust seasonings to your liking. Let stand for at least 20 minutes for the flavors to meld. Serve with steamed rice, lettuce cups, pickled ginger (if using), and chopped macadamia nuts.